Insolight recently developed new kind of solar panels that are capable of yielding power with 36% efficiency. The present figure is almost double of what is delivered by the normal regular panels. The team working on this concept created a very thin structure capable of directing sunrays to some ultra performing solar cells. It results in a very efficient flat photovoltaic system. The system can be best defined as one that is capable of delivering twice amount of power as compared to its traditional counterparts. 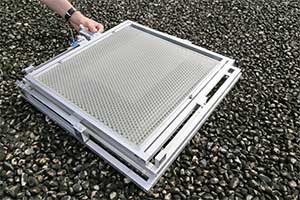 The 36.4 percent figure produced by these cells is world class and much above then most of the systems across the world. The firm has currently placed a prototype on show that has been verified by a Germany based lab named Fraunhofer Institute.

So how exactly does it works? A thin, flat, and transparent optical system framed from plastic directs the sunlight to a very small surface of some highly performing cells. The cells are constituted by multiple  layer that were designed for intaking multiple wavelengths. Since, these are very costly in terms of generation, these cells are to be used only in specific sectors like space expeditions. But to bring this system in for regular use the company decided to put their efforts towards lenses in place of cells. They developed a superb class of lenses that direct the sunlight more intensely towards the panels increasing their efficiency by two fold. As Laurent Coulot, the CEO of this firm likes to add, “It’s like a shower: all the water goes down one small drain, there’s no need for the drain to cover the entire floor of the shower,”

The core of this project has been placed in microtracking system that has been registered for patent by the company. It captures almost 100 percent of the light irrespective of the angle it comes from. The transparent plate surface mainly consists of a large array of millimetric lenses that behave more like a small magnifier network.