People have grown up with the sights and sounds of fluorescent lamps buzzing to life after a few attempts. As the new wave of energy saving appliances gripped the world, technology made the fluorescent lamps shrink in thickness as well as reduced the number of attempts made by lamps to shine their brightest. Today many homes use energy Saver CFL lamps and fluorescent tubes which start giving light the moment they are switched on. 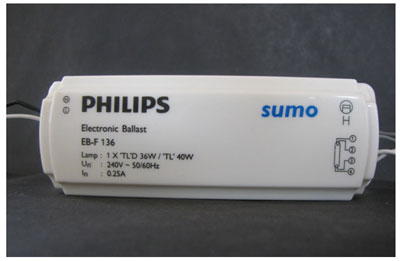 Fig. 1: A Representational Image of an Electronic Ballast Lamp

This instantaneous production of light is achieved by the use of electronic ballasts.

Electronic Ballast is a device which controls the starting voltage and the operating currents of lighting devices built on the principle of electrical gas discharge. It refers to that part of the circuit which limits the flow of current through the lighting device and may vary from being a single resistor to a bigger, complex device. In some fluorescent lighting systems like dimmers, it is also responsible for the controlled flow of electrical energy to heat the lamp electrodes.
Ballast Basics:
For a lighting device based on electric gas discharge to work, the ionization of gas in the tube is necessary. This phenomenon takes place at a relatively high potential difference and/or temperature than the normal operating conditions of the lamp. After the arc is set up, the conditions can be brought down to normal. To achieve this, three types of methods are generally employed: pre-heat, instant start and rapid start. In pre-heat, the electrodes of the lamp are heated to a high temperature before the voltage is impressed upon them through a starter. Instant start ballasts were developed to start lamps without delay or flashing and use an initial high voltage in place of raised temperatures. Rapid start ballasts make a tradeoff between pre-heat and instant start and use a separate set of windings to initially heat the electrodes for a lesser duration and then, using a relatively lower voltage to start the lamp. Another type, programmed start ballasts is a variant of rapid-start. Any of these starting principles may be used in the ballasts. Initially, when the gas is unionized, it offers a high resistance path to current. But after the ionization takes place and the arc is set up, the resistance drops to a very low value, almost acting like a short circuit. If all this current is allowed to pass through the lamp, the lamp would either burn out or cause the power supply to fail. Thus the ballast needs to perform the current limiting.
Types of Ballast:
There are mainly three types of ballasts: magnetic, electronic and hybrid. Magnetic and hybrid ballasts employ a copper coil wound on a magnetic core as their essential components, while electronic ballasts use solid state electronic circuitry to provide the proper operating electrical conditions to the connected lamps. A brief comparison is tabulated below: 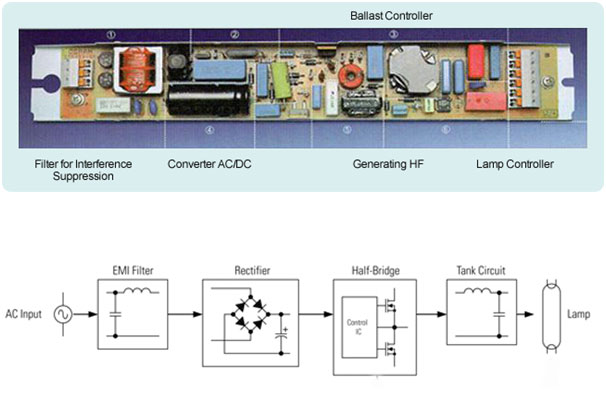 Fig. 3: An Image Representing Architecture and Process Flow of a Ballast Controller

Working of Electronic Ballasts:
The primitive electronic ballast employed a general principle of rectifying the input power and smoothening the waveform by passing it through a simple filter like an electrolytic capacitor. The rectifier converts AC into DC waveform. Improved Electronic ballasts are now generally based on SMPS topology as shown in figure above. The first step is to rectify the input power and then the signal is chopped to increase frequency. This type of ballasts operates between 20 to 60 kHz. Other ballasts like magnetic ballasts generally operate at the line frequency which is about 50-60 Hz. They suffer from problems like flicker and a humming sound which is sometimes a nuisance to ambience. A sample circuit construction of electronic ballast for a CFL Demo board is shown below:

Fig. 4: A Figure Showcasing a Sample Circuit Construction of an Electronic Ballast

Similar circuit design ideas can be implemented using the application notes provided by chip manufacturers in datasheets. The rationale behind increasing the frequency in electronic ballasts is that the lamp efficiency increases rapidly as the frequency changes from 1 kHz up to 20 kHz and after that improves gradually up to 60 kHz. As the operating frequency of the lamp is increased, the amount of current required to produce the same amount of light is reduced as compared to line frequency, thus increasing the efficiency of the lamp. The increase in efficiency with frequency can be plotted as under: 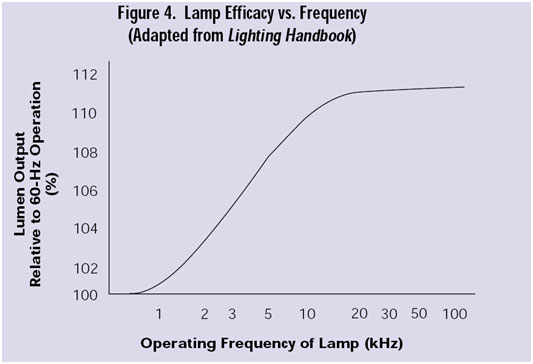 Fig. 5: A Graph Representing Increase in Operational Efficiency of a Lamp

The increased performance at higher frequencies is that at higher frequencies, the time period of an AC cycle is shorter than the relaxation time between consecutive ionization and deionization of gas with alternating current. Thus ionization density in the lamp is held almost constant near the optimal operating conditions over whole AC period. Hence it acts like an ohmic resistor which has the effect of increasing the power factor. Whereas at low frequencies, the ionization density oscillates more about the optimum level causing poor average discharge conditions.
Pulse width modulation or any other chopping technique is utilized to superimpose the incoming alternating voltage on the rectified and filtered output. This makes the interconnection of the current peaks represent an approximate sine wave. Chopping and/or Pulse width modulation can be used for dimming of lamps too via networks like DALI, DSI or even a simple 0-10V DC Brightness control signal.
For more details about working of Electronic Ballast, read Electronic Ballast Insight.

Performance Parameters:
The performance of Electronic Ballasts is measured on different parameters. The most important is the Ballast Factor. It is the ratio of light output of the lamp operated by the ballast under consideration to that of the light output of the same lamp operated by reference ballast. This value is found to be between 0.73 and 1.50 for electronic ballasts. The significance of such a wide range is wide range of light output levels that can be produced using a single ballast. This finds great applications in dimming circuits. However, it is found that too high and too low ballast factors both deteriorate lamp life due to lumen depreciation as a result of high and low lamp currents respectively. When the electronic ballasts are to be compared within the same model and manufacturer, Ballast Efficacy Factor is often used, which is the ratio of ballast factor (expressed in percentage) to the power and gives a relative measurement of the system efficiency of the overall lamp ballast combination. The measure of effectiveness of operation of ballast is with the parameter Power Factor (PF). Power Factor is the measure of the effectiveness with which the electronic ballast converts supply voltage and current into usable power which is delivered to the lamp with the ideal value being 1. This however is not indicative of the ballast’s ability to supply light, low power factor ballasts would require about twice the amount of current needed by higher power factor ballasts and hence support fewer lamps in a circuit.
Any electronic device has a limit to its linearity and when the input signal falls beyond the range, distortion of the signal takes place producing non-linear and harmonic distortions. When the shape of the signal waveform varies from the normal sinusoidal, harmonic distortion is said to have taken place and is measured as Total Harmonic Distortion. THD for electronic ballasts is the percentage of harmonic current added by the ballast to that of the power distribution system. Most manufacturers try to keep THD below 20%, though the ANSI standards allow a maximum distortion of up to 32%. The electronic ballasts make it easier to keep distortions at such levels, which is not so easy in case of magnetic or hybrid ballasts.

Issues with Electronic Ballasts:
Alternating currents can generate current spikes near the voltage maximums producing high harmonic current in case of electronic ballasts. This is a problem not just for the lighting system, but also might cause additional problems like stray magnetic fields, corrosion of pipes, interference with the radio and television equipment and even malfunction of IT equipment. High harmonic content may also cause overloading of transformers and neutral wires in three phase systems. A higher flicker rate might go unnoticed by the human eye, but can cause problems with infra-red remote controls used in home multimedia devices like TVs. Intelligent documentation and design of ballasts makes it possible to reduce the interference be minimized in the frequency bands which are used in applications. However, there are some uncharted nooks in the frequency spectrum which are not used in any application and most of the disturbances by ballasts in this region are generally not documented and neglected giving a cleaner picture on paper than it actually is. Electronic ballasts do not have circuitry to survive power surges and overloads. Not only that, electronic ballasts have an initial high cost, which might be a thorn in the eye of impulsive customers, though they more than make up for that high cost in the long run.

Advantages:
But some well publicized failures of early ballasts and disadvantages should not be cloud the judgment of buyers. The technology has come a long way from a failure rate of about 20-30% a few years ago to less than 1% now. Ballast reliability ages like wine, the more time it spends in service, the lesser are its chances of failing. The first six months are like incubation period for the electronic ballast, if it survives them, life expectancy increases to 10 or 12 years. The output of the lamps degrades more slowly when used with electronic ballasts as compared to magnetic ballasts. A plot of performance comparing the electronic and magnetic ballast is shown below: 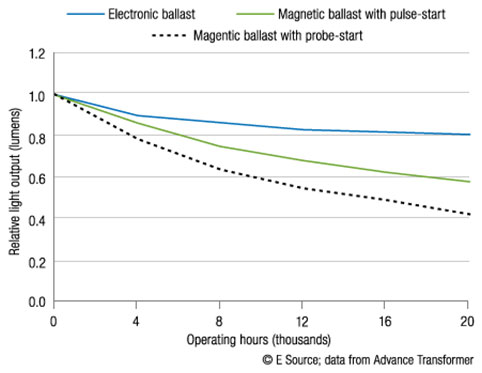 Fig. 6: A Plot Comparing Operational Performance of an Electronic and Magnetic Ballast

In order to reinforce the belief of customers in electronic ballasts, quality assurance standards for electronic ballasts have been introduced. Certified Ballast Manufacturers (CBM) test electronic ballasts for a varying range of lamps like T8, T12/ES, T12 Slimline, CFLs etc. Not only are these devices more efficient, they are much quieter and lighter. Electronic ballasts have almost half the power loss when compared to magnetic or hybrid ballasts. Also, they can operate with ease with lamps that cannot be operated directly by a choke on the line because of the large lamp voltage requirements. There are mainly three ways I which energy efficiency can be increased in lamp-ballast systems: Reduce ballast losses, operate at higher frequencies, and reduce lamp electrode losses. All of these three are incorporated simultaneously in Electronic Ballasts hence making them more energy efficient. 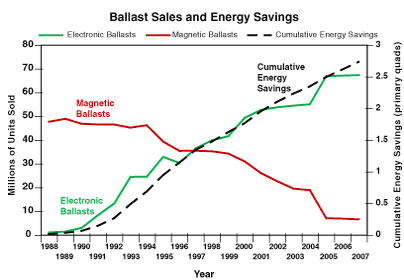 Success has been so huge that US Energy agencies had even mandated the replacing of the magnetic ballasts with electronic ones by 2010 and eventually phasing out the magnetic ballasts. The market literally exploded with sales increasing manifold within decades. Where it was virtually unknown in mid 70’s, electronic ballasts have taken up large proportions of market shares in various countries ranging from more than 80% in US to 30% in European Union. Millions are being spent on R&D and average market share is expected to rise to 77% by 2015. Usage of such devices not only entails cost benefits in the long run with an estimated Lifetime value of savings for technologies standing at $18,400 million, but also Environmental benefits of reduced carbon dioxide, sulfur dioxide and nitrogen dioxide  emissions. This means not just a better present, but a pleasant future too.
Filed Under: Articles
Tagged With: ballast, electronic ballast, rectifier