Step: 10) Assemble the modules and test the assembled unit

We have built the reusable modules and we have a good idea from the circuit diagram about how their pins should be connected together. At this point we don’t have to worry about the internal circuits of the module and all we need to take care of is the pin outs and connections between modules and other components. The previous circuit diagram is re-drawn here based on this idea. 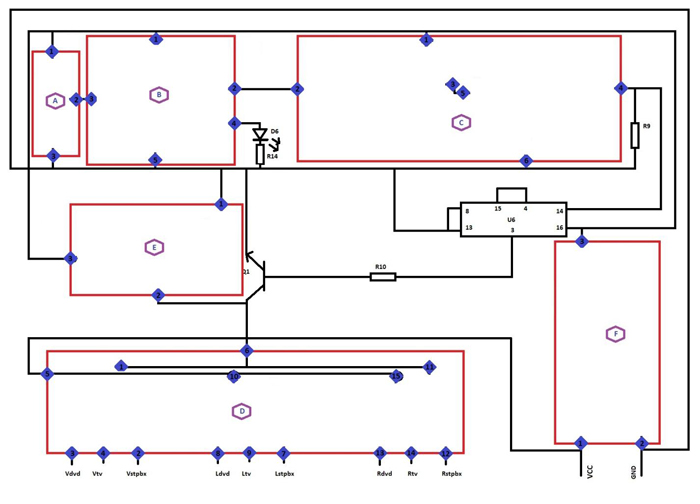 Fig. 1: Circuit Diagram of BOARD_A and BOARD_B With Pin Configuration

Now we can connect these modules along with the rest of the components in a single board or multiple boards and then interconnect the boards together. In this project I used two separate boards for connecting the entire things. Let us call the boards as BOARD_A and BOARD_B.

My plan is to include the RELAY module, INDICATOR module and the external connectors for audio-video and power in the BOARD_A and the rest of the circuit in BOARD_B. I’ve made such differentiation for the advantage of testing the audio-video switching process using the relays separately.  The following figure shows how the circuit is split across two boards; BOARD_A and BOARD_B. 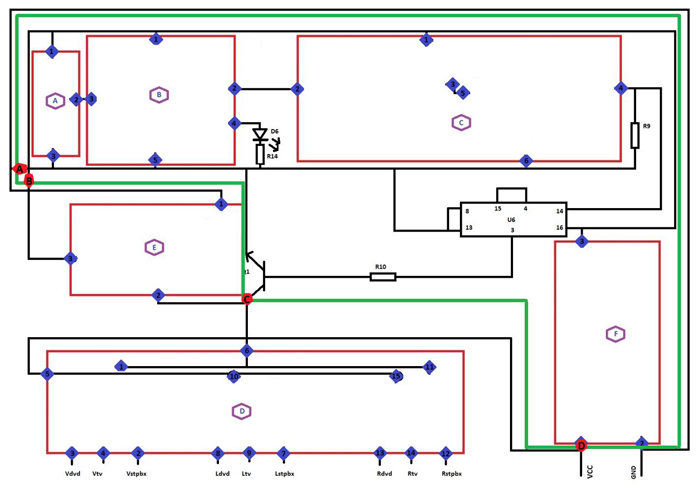 The BOARD_B includes the things enclosed in the green outline and the rest of the circuit forms the BOARD_A. The BOARD_A and BOARD_B is connected together using four pins marked as A, B, C and D. The above figure is redrawn more simply as shown below. 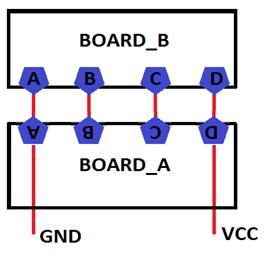 The pin function details regarding the BOARD_B and BOARD_A is given in the following table.

Let us build the BOARD_A and plug in the modules and test it. The BOARD_A includes a RELAY module, INDICATOR module, power supply and audio-video connectors. We are not directly solder these components into the BOARD_A but solder their corresponding connectors only. The connector pins are then interconnected by using solder tracks.

We can use RMC male connector for plug in the external power supply. 9V DC adaptor connector terminated in a female 2 pin RMC is shown below. 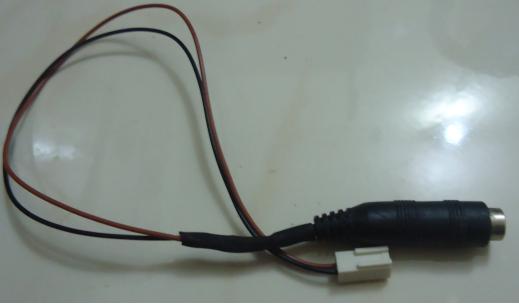 Now it is time to build the BOARD_A with the connectors for the modules, power supply, audio-video connectors and the interconnecting solder tracks. The image of the BOARD_A which I’ve built is shown in the following figures. 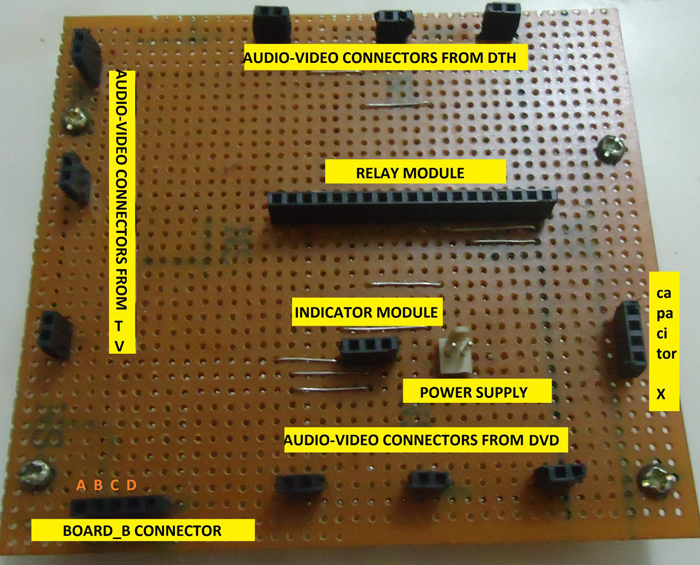 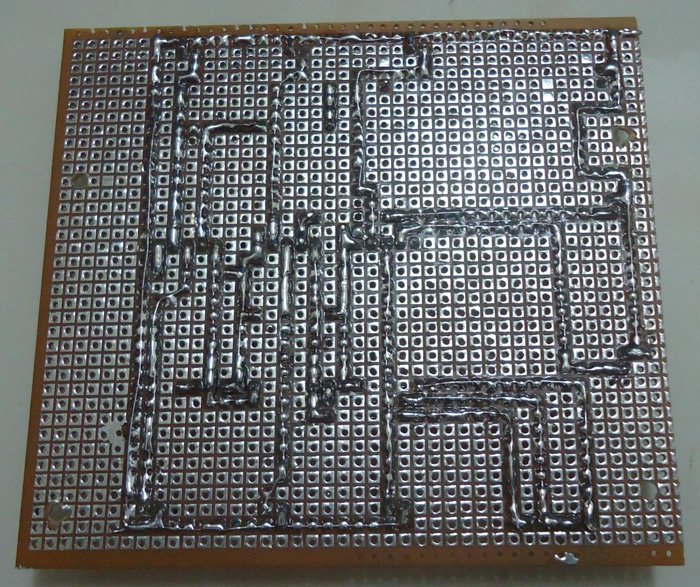 You might have noticed the female connector marked as ‘capacitor X’, which is nothing but an option for connecting a high value capacitor (>=1000 mfd) in parallel with the power supply. It is intended to check the sudden drop in voltage when the three relays fire at a time.  This is not at all necessary if you are using power supply with high ampere ratings. 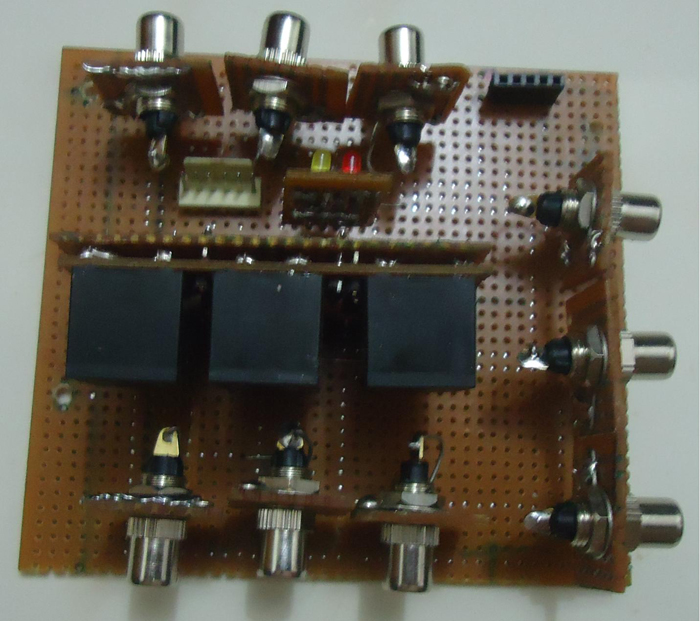 Now the question is how you can test the BOARD_A. The BOARD_A switches the audio-video connectors by activating the relays and the relays are activated whenever they are driven by the zero voltage appears at the PIN C of the BOARD_A. With this knowledge if we directly apply a zero voltage at the PIN C of the BOARD_A after power-up the relays should get activated and the switching should happen. We can use a simple toggle switch plugged into the BOARD_B’s connector port for this purpose. The arrangement is shown in the following figure. 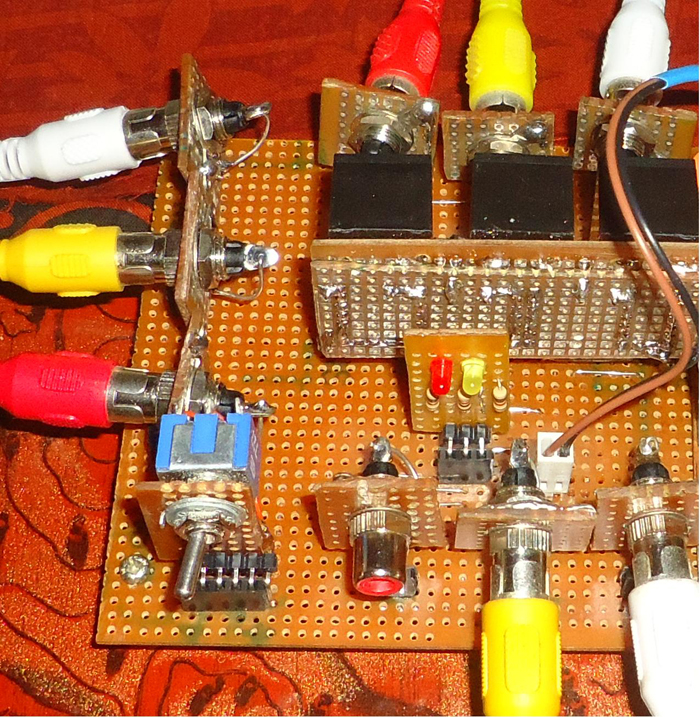