A majority of the wattmeters we see today are analog in nature. They consist of numerous moving parts and contain bulky components which not only take up space but also cost a lot of money and are not as accurate as they should be. In this tutorial you will learn how to make a wattmeter which is purely electronic and has no moving parts. The components are also easily available at an affordable price. 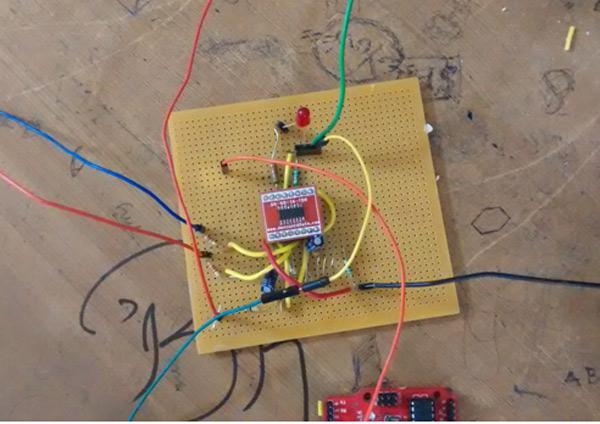 1. The components are connected according to the circuit diagram shown above.
2. The DC power is different from the voltage source and current source of the component whose power is being measured. DC voltage to be given to the IC is 5 volts.
3. The ‘voltage source’ terminal is connected to the voltage of the component whose power has to be measured. If you are measuring power from an electrical socket, the voltage source is connected to the live terminal with the neutral connected to ground.
4. For the ‘current source’ the 350uOhm resistor is connected in series with the component whose power is to be measured.
5. The output pin is connected to an input pin of an Arduino and also to an  LED which gives physical confirmation of the working state of the device and the Arduino  is able to digitally measure the frequency of the output pulse.
6. The Arduino is connected via USB to a computer. Using a python script on the computer and by appropriately programming the Arduino we can establish serial communication between the computer and the Arduino, thereby obtaining a live plot of the real time power being consumed.
7. The total energy consumed is obtained by taking the summation or integral of the power over time.
8. If you are measuring power from a household electrical socket, please exercise caution and make the connections only with adequate knowledge of electrical circuits as improper connections may cause damage to household wiring or may cause injury.
9. Ensure that all power is switched off while making the connections
10.The IC ADE7757 is normally only available in surface mount packages. So either use a PCB (Printed circuit board) or purchase a DIP adapter for 16 pin surface mount ICs.
11.The Arduino source code is burnt on the Arduino and the python source code is run on the computer.
12.In order to run the python source code , download a python IDE such as ‘IDLE’ and install it, then open a new file , copy and paste the code and run the script.
13. The Arduino needs to be connected to the computer for the python code to work.