Scientists working at the Ultrafast Laser lab at the University of Kansas successfully prepared the substance by linking atomically thin layers of molybdenum disulphide and rhenium disulphide.

“Both absorb light very well as semiconductors, and they are both very flexible can be stretched or compressed,” says Hui Zhao, associate lecturer of physics and astronomy at KU, who co-authored the paper. “The aim of this entire direction of research is to produce light-emitting devices, such as LEDs that are ultrathin, just a few nanometres thick and flexible enough that you can bend it. We revealed through such bilayer substance, it can be accomplished.”

To explain the breakthrough, Zhao likens the behaviour of electrons in the novel substance to a classroom. “One can think of a substance as a classroom full of students, which are the electrons, one on each set,” he says. “Sitting on a seat, a student or electron, cannot move freely to conduct electricity. Light can provide enough energy to stand up some of the students, who can now move freely and, as electrons to conduct electricity. This procedure is the foundation for photovoltaic equipment, where the energy of sunlight is captured and transformed to electricity.”

The KU scientist said that emission of light involves the inverse procedures, in which a standing electron sits down in a seat, releasing its kinetic energy in the form of light. “To make a good substance for light emission devices, one needs not only the electrons that carry energy, but also the seats called holes, for the electrons to sit down,” he says.

Previous studies by numerous groups, comprising Zhao’s have produced various bilayer substances by stacking distinct sorts of atomic sheets. However, in these substances, the electrons and the seats exist in distinct atomic layers. 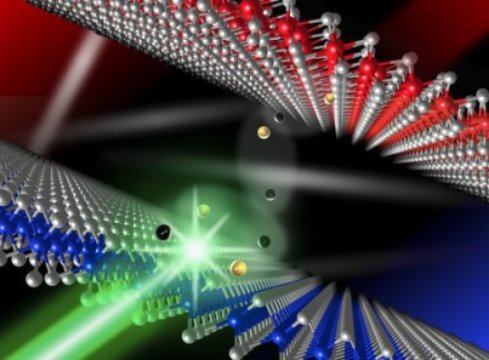 “Because electrons cannot easily find seats, light emission efficacy of such bilayer substances is very low, more than 100 times lower than in one atomic layer,” he says. “All the electrons and their seats will be in their original layer, instead of separate. The light emission will be a lot stronger.”

According to Zhao, the ultimate aim is to develop a method that enables precise control of the location of seats and electrons among distinct atomic layers so that the optical and electronic properties of the substance can be optimized and regulated. “We would someday like to see LEDs that are thinner, more energy effective and bendable,” he says. “Think about a computer or phone screen if you could fold it a few times or an put it in your pocket.”