“Entropy is often thought of as a measure of disorder or randomness, but here it is determined by the number of shapes that the molecule could potentially take, as well as by the number of distinct ways that the molecule could meet the energy needs to alter its configuration,” says Eric Hudson, an associate lecturer of physics at Penn State and an author of the paper.

“If the tip of the STM enhances the energy needed by the molecule to make a change in shape, it is also enhancing entropy in the system, in essence, a transition needs a potentially big number of small-energy excitations to co-occur to overcome the energy constraints for a configuration alter. The bigger the number of excitation needed, the more ways in which such excitations may be gathered. Such multiplicity gives rise to entropy.”

“That was completely unexpected,” says Hans Joseph Hug, a lecturer of physics at EMPA, the Swiss Federal Laboratories for Materials Technology and Science and an author of the paper. “It meant that the tip, which is still relatively far away from the molecule and in no-way touches it, somehow influences the movement of molecules.” 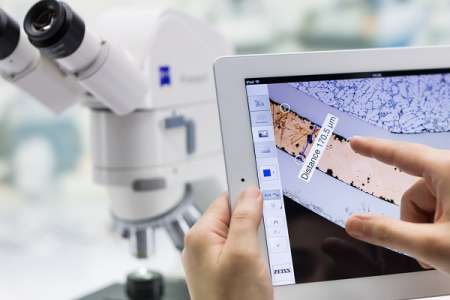 The pace at which the molecule “hops” between shapes and the number of possible distinct shapes that the molecule can take is a representation of the molecule’s entropy, changes depending on the distance between the tip of the STM and the molecule. ‘This implies that the instrument we are employing is affecting the system we are trying to study,” says Hudson.

The scientific group was interested in comprehending what drives the molecule’s ability to make changes to its shape, a popular need of chemical reactions and biological procedures. They employed an STM, which comprises of an extremely fine wire with a sharp tip that can be positioned with sub-atomic accuracy, to observe changes in the shape of a single molecule of bibutyl-sulfide, a lengthy hydrocarbon with a central Sulphur atom, linked to a flat gold surface.

Current passes between the tip of the STM and the surface and as the tip scans across the surface the STM identified changes in the current as it passes over the molecule.

“For me the thing that is coolest is that entropy is this basic thing that we all learn about in school, but it is never something that you estimate,” says Hudson. “When you go in the lab it just disappears somehow, so that fact that we were able to estimate it and that the entropic forces are compatible to the forces we usually measure was just mind-blowing.”