Continue to Site
Although there are several solar powered devices available over the internet, this DIY project developed by Scott Hughes is something which is pretty simple to comprehend and could be easily made at home. Scott has created a device termed as Evap cooler which utilizes solar energy to generate cool air. This, in turn, drops down the temperature of the surroundings. 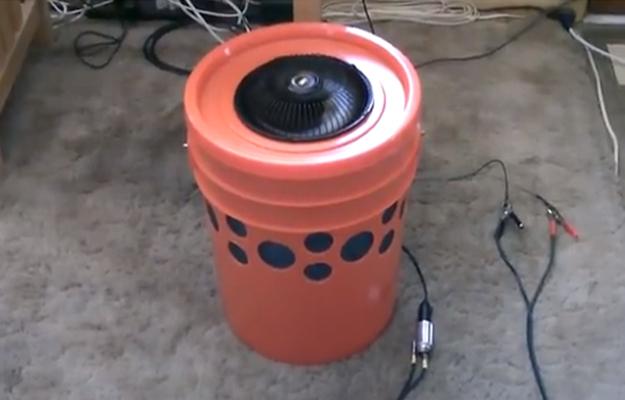 Figure 1: DIY Evap Cooler
The device utilizes the concept of using solar energy to operate a fan that generates cool air with the help of the motor fitted inside. He made it with the help of a pond pump dumped in a bucket of water. Discussing in detail, the setup makes use of components like 5-gallon bucket, computer fan, screen material, filter material, aquarium tubing, push pin, clamp, hole saw, razor knife and yard stick.
He started the task by filling 2 gallons of water in the bucket and then drilled holes onto the walls such that the holes lie above the water level. He made big holes measuring 2-inches while the smaller ones were 1.5-inches in diameter. After this, he cut down the cooling pad keeping it 13-14 inches tall and 30-31 inches wide so that it matches with the circumference of the bucket. Then he covered the bucket with the double layer of a window screen followed by a layer of the cooling pad. This aided in retaining the moisture inside the bucket so that it didn’t escape through the holes.
After fitting the cooling pad inside the bucket, he cut the lid of the bucket in a way that the fan could be fitted exactly in that much space to be positioned above the bucket. Then he dropped a motor at the bottom of the bucket and connected with aquarium tubing. This tube was circled around the container and the end was clamped to prevent the water from escaping. He also pinned the hose along its length so as to saturate the cooling pad.
In the end, he connected the setup with the solar panel which powers the air cooler. It works exactly like a regular desert cooler by using the principle of water evaporation. In other words, when the heat helps in changing the state of water from liquid to vapour, it cools down and helps in generating cool air.
Discussing the source of power, Scott has used a solar panel here but the device uses just 15 watt of power which can be supplied from any other source as well. This setup would depend on how cool the water is. One can also add ice to the bucket for effective results. It was found that this device could bring the temperature down by 20 degrees.
After looking at the project, it could be implied that it’s a simple implementation of a common air cooling concept. However looking closely, it can also be observed that the device uses a computer fan which is not enough to work effectively in very hot temperatures. Moreover, the amount of water is too less and it might require being refilled at regular intervals.
Here is the video posted by Scott Hughes that demonstrates the whole procedure of building this air cooler along with the explanation of its mechanism.
Filed Under: Reviews