Continue to Site
Maxim recently released the next version of industrial, smart force sensor – MAXREFDES82#. Empowered by a 24-bit analog-to-digital converter (ADC), the MAXREFDES82# is mounted over a quadrant of load batteries that get channeled into a multi-channel for sensing weight and center of mass for objects that are kept on the platform. The scale offered a full-scale response that goes up to 780gms. The user interface is also very responsive to the center of mass that gets placed over the platform along with the total weight measured. Apart from serving as a smart force sensor, the design also works pretty well as a sturdy tactile interface that can sense force instantly. And the best part is, the complete system uses less than 50mA power for regular functions and can be integrated and evaluated quickly through a USB interface.
The board is designed in form of a compact form factor that aids in swift installation and evaluation. The prime features of this sensor are as follows:

Major factors that provide it with a strong edge over its closest rivals include:

Main application areas of this sensor include:

Hardware Details
Below given figure explains the reference design of MAXREFDES82# along with the basic assembly of its components. Whenever any tactile force or weight gets in touch with the top plate surface, the four strain-gauge batteries/cells lose their form to give out electrical signals to the MAX11254 ADC. The system is able to calculate total force and location of center of mass by calculating the force distribution over four cells. Meanwhile, the system scans the signal output emanating from each single cell consistently which helps in mapping of accurate force and its motion. The system can easily form a 3D human interface input application because the system monitors and stores the force along with its magnitude. The reset switch (SW1) of the board resets it and the calibration switch can be used for the purpose of calibration. There is a red colored LED that informs about the nature of power supply and the flashing green light informs that ADC is converting. 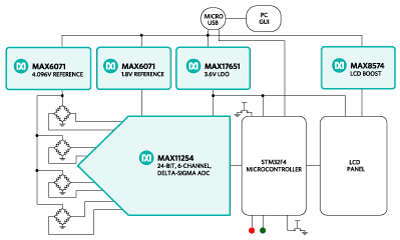 Strain-Gauge Load Cells
The strain-gauge load cells get stimulated with the help of a 4.096V voltage reference. Whenever, the strain-gauge cells get deformed by acting load over them, the electrical resistance over load cell changes considerably. Therefore, it can be said that the voltage change from cell output is directly proportional with the load. For the tactile properties, the design inculcated load cells manufactured by Phidgets Inc. The load bearing capacity of each load cell is 780gms while the rated output equals 0.8mV/V. The non-linearity of these cells equals 0.05 per cent FS and the non-repeatability also stands at 0.05 per cent FS.
Filed Under: News