INTRODUCTION – Field emission display is all about the sharp features of a display at a very low-cost.

Field emission display (FED) is a type of Flat Panel Display which is thinner, brighter, energy-efficient and cheaper display than liquid crystal display (LCD). FED also named as Nano Emissive Display (NED) consist of millions of accelerated electrons charged by very less voltage, compared with high voltage for large-screen, HD LCDs. These electron emitters are controlled by cold cathodes to generate colored light and are emitted towards phosphor plate and this phenomenon creates moving images. FED has a wide viewing angle and provides brightest color among plasma and other latest displays. 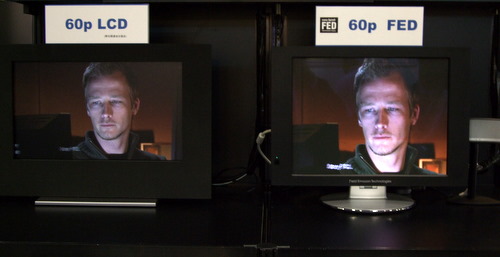 At the place of CRTS carbon nanotubes (CNT) can be also used to aim electron beams on phosphor coated screen which will further enhance resolution. FED is very thin, less than an inch so we can hang them very easily on walls like a portrait and capable to offer 20,000-to-one contrast and can flash 240 images per second twice as many as the fastest HDTVs in the market. FED has another type Surface-conduction Electron-emitter Display (SED) which is based on surface electron conduction technology. FED can be used for television, desktop, laptop etc. and has applications in medical imaging, defence and many other fields.

FIELD EMISSION PROCESS – Emission takes place from one medium to another and this medium can be solid, liquid, air, vacuum or any dielectric. Field emission is, also called “cold emission” directional quantum-mechanical tunneling which occurs due to electrostatic field. Thermal emission, which is the basis of CRTs requires high operating temperature, consumes much power and not energy efficient as loses due to kinetic energy disturbance. On the contrary, field emission extracts electrons through a large electric field without high temperature requirement. This resulting electron source has reduced emittance and no heat issue that’s why field emitters are a “cold cathode” electron source.

Field emission based electron sources has many application as it gives smaller spot but there most undesirable and inappreciable aspect for engineers is that they introduce electric discharge and vacuum breakdown.

FIELD EMISSION DISPLAY – Flat panel display technology has the two leading but non natured technology, they are the Field Emission Display (FED) and the Thin Film Transistor Light Emitting Polymer (TFT LEP). Both of these technologies are emissive, rather transmissive as is the TFT LCD, therefore both offer very wide viewing angles and high contrast ratios in brightly lit environments.

The idea behind FED is to offer each pixel a separate electron emitter compared to only a single one in the CRT leading to an ultra-high definition picture with unmatched clarity and no blurring. Carbon nanotubes can be also used as electron emitter source and the sharp point on the emitter allows for electrons to be pulled off of the nanotubes at surprisingly low voltages. FED employs arrays of small sharp silicon or molybdenum cones which are deposited on a substrate within an etched hole. The result is a triode structure of between a few and less than one micron in diameter, of which there are thousands per individual pixel. Traditional FED structure made use of many micro tips, which were blue, red or green and together form one pixel. As FEDs display color sequentially, the advantages of the FED include the fact that they only produce light when the pixels are ‘on’, and as a result power consumption is dependent on the display content. Electrons leave the sharp tips with relatively low extraction voltages at the gate. Field emission from a flat cathode plane reduces the need for fine lithographic features and relaxes the tolerances demanded of the triode structure.

Photolithography is used for making a series of rows of switching gates at right angles to the cathode lines, forming an addressable grid and a small patch of emitters is deposited at the intersection point of these rows and columns. A metal grid is laid on top of the switching gates.

The best comparison between CRT and FED can be made in field strength by considering that a large CRT uses 35-45 kV across a two foot anode-cathode gap, whereas an FED uses hundreds of Volts up to 10 kV across a gap of millimeters.

‘PixTech’ is a display company which manufactures FEDs and its first targeted areas were avionics, medical devices, and motor vehicles. These markets were interested in smaller displays, in the 4 to 8.5 inch diagonal range and very bright displays that were readable from wider angles than were available with LCDs. Also in January 1997, PixTech was given a “Display of the Year” award from Information Display magazine. The technology has yet to see any mass market. Some ‘PixTech’ partners are Raytheon, Texas Instruments, Futaba, and Motorola and showing their interests in FEDs.

CATHODE NANO TUBE FED – FED can use recent technology of carbon nanotube as emission source which are made of hollow cylinders made entirely of elemental carbon, a nanotube is one-thousand times smaller than a human hair. They can be also thought of as a sheet of graphite (a hexagonal lattice of carbon) rolled into cylinder. Metal tips of FEDs are replaced by CNT based emitters. Electric field is generated by a gate electrode contained within every sub pixel and anode is placed in between the display glass and the phosphor layer, emitted electrons are swept through a vacuum towards their respective phosphors i.e. red, green, or blue (RGB) where light is emitted when the phosphors are struck.

CNT FED has typically the operation range of 50 -100volt but driving current is very less.

Samsung SDI group has demonstrated a 38-inch CNT-FED at the 16th International Vacuum Microelectronics Conference. CNT growth directly on the cathode substrate is in under process of companies like Motorola and LETI while Samsung and ANI are working of allowance of printing of the CNT because printing approach is more favorable for fabrication of large area offering uniform emission in high volume as opposed to high temperature CVD (cathode vapor deposition) approach required for direct CNT growth.

The printable field emitters (PEE) materials are produced as an ink and can be deposited using, for example, screen-printing technology, instantly making them appealing for use on broad area substrates. E-band structure of the joint matrix and particle means that each particle in the composite acts as an individual field emitting site. Unlike micro tips, the PFE cold cathode materials are extremely robust and relatively insensitive to poor vacuum. PEE will further enable the operation with large triode structures and feature size is also compatible with screen printing technology.

Some advantages of CNT FEDs are:

Some factors like their aspect ratio (100-10000), sensitiveness to adsorbed gases are making unfavorable realization for them but some company like Motorola and Samsung are trying to overcome these drawbacks.

SURFACE-CONDUCTION ELECTRON-EMITTER DISPLAY – SED are like CRT in some areas but as CRT uses a single large electron gun that has to be set back from the glass screen means deepness is proportional to wideness. SED screens are illuminated with millions of emitters electrons (based on palladium oxide laid down by an inkjet or silk-screen process), enabling images to be projected across wide screens only a few centimeters deep. SED requires low voltage and high drive current which needs more robust interconnection lines.

The target market for both FED and SED is large area HDTV. Canon created a joint venture with Toshiba to develop SEDs but later they shown their interests in OLED.

Basic difference between FED and SED:

DIFFERENCE BETWEEN CRT AND FED –

DIFFERENCE BETWEEN LCD AND FED –

CONCLUSION – FED provides extremely efficient features but from few years the LCD panels are dropping in price while increasing in quality there are some problem for their mass market. Thus the technology is still in the research stage and there are no plans to begin mass production at this moment. But on the basis of these three parameters: quality, cost and timing, FED will be the future of TV technology, and it may remain so forever.