Celebrity engineer Grant Imahara says in the opening shot of Project First Responders, “Welcome to the drone revolution,” which is a web series that documents new exciting applications related to fighting forest fires. The latest on the story is usage of drone technology. Responders from Project First intend to manufacture a fleet of interconnected, autonomous drones that can assist firefighters as well as police in taking control of wildfires. According to Ivan Stamatovski from Easy Aerial, “If you think of firefighters as first responders, this will be your zero responder; drone command center in the cloud will provide the platform for communication between the autonomous drones.” He is a drone expert. 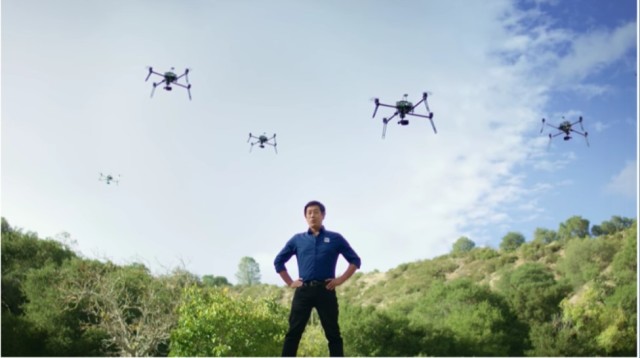 The web series recently came up with its second episode which gives a close look into the engineering that runs behind Project First Responders. The first installment has both the people, Stamatovski and Imahara talking about the components that were used in drone building including the cameras, the sensors, and the communication system that works between drones. The next episode talks about the drone launch pads and gets into further details about how firefighters and police can come together to combat with the help of these drones.

With the help of thermal imaging and sensors, these drones are able to offer valuable information about movement and direction of the blaze. The high definition zoom cameras of these drones help the police in all kind of rescue operations related with fire fighting. As Imahara likes to point out that United States alone witnesses approx. 75, 000 wildfires every single year.  And development of one such technology can have large level benefits for flying firefighters who endanger their lives to save others everyday. She says, “Drones can be a huge advantage to agencies fighting natural disasters. They can launch immediately, gather vital data about an emergency situation and help efficiently relay that information to all agencies involved, all without putting further lives at risk.”
Filed Under: News