Solar technologies seems to be taking center stage of technological world in near future. From solar panels to cells, every single equipment is getting better and better for future usage. After the designer solar panels that we discussed recently, now we are moving to a new range of solar cells that is flexible enough to be wrapped around any surface. So, next time you have an idea about solar cells, you can imagine some cool gadgets in place of scorching saltines. A team of South Korean scientists recently developed new kind of solar cells that are so flexible that you can wrap those around a pen or a pencil.

In terms of thickness, these are 50 times thinner than a human strand and around 1000 times less than the regular solar cells. The thickness of these cells was reduced to the point where those could be wrapped around all kinds of objects or to fit over the ridges or grooves of unstructured materials like any fabric. 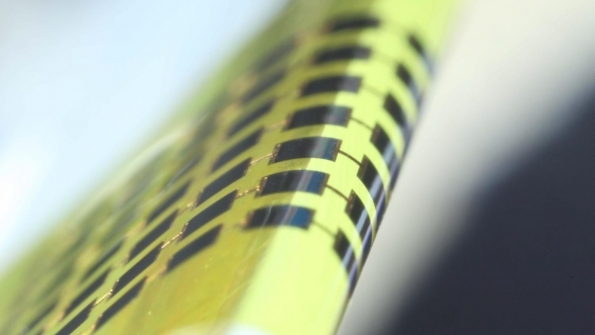 As Jongho Lee, an engineer working on this project from Gwangju Institute of Science and Technology in South Korea likes to explain, “Our photovoltaic is about 1 micrometer thick, and the thinner cells are less fragile under bending.” Which means these cells would take only a fraction of the strainthat would be absorbed by the normal cells we use today. The energy stored by these prototypes will be enough to recharge small batteries inside all kind of wearable devices which will increase their otherwise small battery life. These can also be integrated over the outer ends of fitness bands which will allow them to recharge automatically as and when you go out in sun.

In recent years, creating a new kind of solar cells has taken over the science world like a fashion trend. You will find every other scientist making serious efforts to do something in this respect. As Vladimir Bulovic, an MIT based professor who worked on a similar project says, “It could be so light that you don’t even know it’s there, on your shirt or on your notebook. These cells could simply be an add-on to existing structures.”

Bulovic’s project employs vapor depositions for simultaneous growth of layers and layers of solar cells. This aids in reducing their thickness and increasing their flexibility with usual techniques. The South Korean team, on the contrary, used transfer printing for painting the solar cells straightaway over flexible substrates. These cells were derived from gallium-arsenide semiconductor material that was then coated over metal electrodes. The scientists etched the cells over electrodes under extreme pressure with the help of a material called photoresist capable of acting as a temporary adhesive between metal, substrate, and cell. Once the bonding was done successfully the makers peeled off the photoresist to bring up the final device. Any other kind of permanent device would have added to its weight and thickness.