Continue to Site
The domain of nanomaterials struggling to substitute indium tin oxide (ITO) as the see-through conductor that regulates the display pixels in touch screen displays is getting stuffed. We have witnessed substances comprising carbon nanotubes, graphene and silver nanowires endorsed as the heir seeming for this functionality. 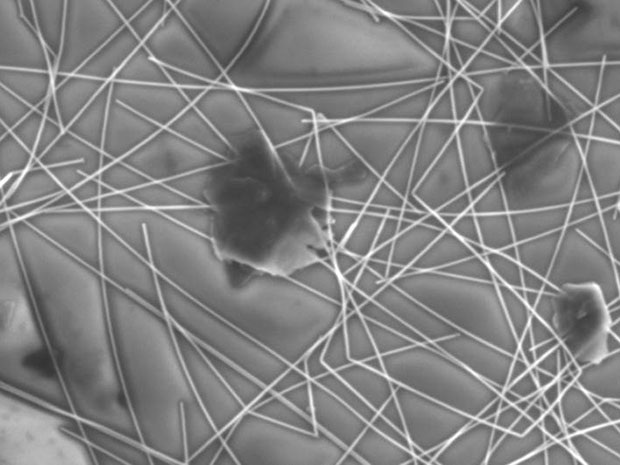 Now, scientists at the University of Sussex in England have discovered a robust contender into the war for replacing indium tin oxide. It is a hybrid substance comprising of silver nanowires that are connected together with graphene.
“The hybrid substance is immensely cost-effective based on the fact that we only require utilizing a fraction of the nanowires usually needed to avail the features of ITO,” says Alan Dalton, a lecturer at the University of Sussex. Even it was the lab of this lecturer where the entire study was conducted. “The graphene functions as a connector between the nanowires that implies that the network does not require being exceedingly dense. We place some amount of graphene into a sprayed network of nanowires through the process of film deposition.”
The costs associated with this research is reduced to great extent, particularly the cost of silver nanowires versus the hybrid material on their own opens novel avenues of the potential of it acquiring a bigger share of the translucent conductor arena. Also, it has been predicted that the demand for such types of conductors will boost the sales past the $900 million by the year 2025.
According to the details of this research, the scientists disclosed that the core agenda to generating the material is a mathematical method that has been utilized conventionally to illustrate how phase alters such as freezing occurring in the exceedingly small areas.
“In this study, we have implemented a mathematical procedure to work out the tiniest subpixel size we can create without causing any effect on the properties of our electrodes based on nanowire,” explains Matthew Large, the head author of the research. He also stated that “the result of the experiment is to inform us how to fine-tune our nanowires to cater the needs of any sort of given application.”
Silver nanowires have considered being one of the highly promising substitutes to ITO. Entities like Blue Nano and Cambrios are among the most popular commercial groups leveraging this sort of technology.
“Silver nanowire, as well as silver nanowire combined with graphene hyrbids, is undoubtedly the most feasible replacements to ongoing technologies,” says Dalton. It is also believed by Dalton that their novel procedures will not just reduce the overall production cost that is linked to such substances, but also decrease the energy requirements of such materials. As a result, it will give users both an advantage in terms of performance and price, which is an added advantage over similar products utilized by competitors.
Dalton and his team members have linked forces with M-SOLV from their laboratory based in Oxford, England. As a team, they are searching to implement these advance research techniques to commercial projects.
Filed Under: News