Continue to Site
Kids often swallow small things that are capable of posing potential threats to their life if not removed timely. Also, internal damages and injuries often require diagnosis and repair job which can be done correctly if some visual information can be acquired through some internal cameras. No doubt, the human digestive tract is a tricky place that needs special tools for diagnosis as well as treatment. If something dangerous gets stuck in it, one may need to undergo surgery to retrieve the stuck item from esophagus. However, as the times are evolving better options are coming up in every sphere. 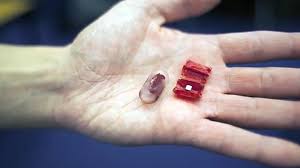 A team of researchers is currently developing a special technology that will be able to perform above mentioned procedures in a much safer and less invasive way. It means you might not have to go under esophageal laparoscopy or surgery in any such cases. Recently, researchers team from Tokyo Institute of Technology, University of Sheffield, and MIT came together and created a special kind of origami robot that can easily be swallowed for carrying out various tasks in human stomach.
MIT students and researchers have been working on origami robots for several decades. They were able to develop a prototype in 2010 that consisted of a plastic sheet embedded with actuators that permitted folding of this structure and special magnets that could help in creation of hold over segment below it.
The prototype was pretty much capable of folding itself in form of an “airplane” as well as a “boat” following pre-indicated crease lines, pretty much similar to origami folders that can be created by folding paper sheets without tearing or cutting it. Since then, more and more modifications are being applied and the shape and capability of these robots getting better and better with every passing day. The recently created ingestible robot has been formed from a biocompatible substance that is derived from pig’s intestine. The robot is then encrusted in a pill-shaped ice capsule that can be swallowed very smoothly. When it reached in stomach, the ice melts away and the robot starts doing its work and grabs the items that need to be retrieved.
The origami robot is capable enough of propelling itself in stomach liquids and uses a stick-slip friction motion mirroring the normal walking procedure. Its movement can be controlled easily by magnetic fields that are applied from outside of human body. It eliminates the requirement for an incision altogether and no laparoscopy needs to be performed. The team recently demonstrated all abilities of this robot while they were taking a trial test in an artificial stomach. The biggest success was achieved when team was able to retrieve a button battery from stomach with the help of this technique. Did you know that more than 35, 000 U.S. citizens swallow button batteries on an annual basis? This gives enough idea of the potential this application of robot will carry in the medical field.
Filed Under: News