In today’s age of connectivity, smartphones and tablets are becoming more of a necessity rather than a luxury. Whether it is not to miss important mails, being updated with the news or finding directions when lost – connecting to the Internet anytime and anywhere is becoming an integral part of our lives. It’s now possible to get internet access in any location as long as your phone gets a good signal from the cellular network. You can also use public Wi-Fi hotspots to connect to the Internet through a shared connection. So how exactly does the Internet, which was made for computers, work on your mobile phone?

First, let’s see what Mobile Internet is. In simple terms, Mobile Internet is a smaller Internet scaled down to fit the dimensions of a web browser on a mobile phone. The mobile phone network is an example of a cellular network. A cellular network has a cluster of geographic locations together known as a ‘cell’ which connect to the Internet through satellites. Each cell has a transmitting tower at its centre through which information is passed to and fro via digital radio waves.

Connecting to the Internet

There are usually two ways to connect to the internet through your mobile phone – Via a cellular telephone service provider or by using standard Wi-Fi. A Wi-Fi enabled device lets you surf the Web at free Wi-Fi hotspots, which is helpful when the phone network connection isn’t that strong. Through a cellular service provider, the phone connects to the Internet through data transfer the same way a PC does, but with a wireless link. We can access the same Web applications just like in our PCs if we use a Wireless Application Protocol (WAP)-enabled cell phone. WAP is the universal standard for wireless communications and applications.

For operating mobile phone networks, Global System for Mobile Communications (GSM) and Code Division Multiple Access (CDMA) are the most commonly deployed. GSM and CDMA use different algorithms which allow multiple mobile phone users to share the same digital radio frequency without causing interfering for each other. Cell phones have an in-built antenna which is used to send packets of digital information back and forth with cell-phone towers via radio waves. Mobile phones connect to a cell tower in the area, and instead of connecting to another phone it connects to the Internet and can fetch or retrieve data.

The voice and data channels of cell phones are separated for maximum efficiency – Mobile Voice goes in one channel and IP or SMS signalling over Mobile Internet in another. The General Packet Radio Service (GPRS) network provides a gateway to the internet through different frequency channels for uploading and downloading.

Now, let’s see what goes behind thfe transfer of data between a wireless device and the Internet. The main component is Radio frequency (RF) energy which can be transmitted throughout a building passing through walls and other objects. This RF energy is transmitted to carry the information between your phone and the Internet. A Modem gets the information onto and off the RF carrier by modulation and demodulation. The information through the RF carrier is sent in packets which have a source and destination address, very similar to the postal delivery service.

Different computer networks are linked through a common Internet protocol that lets them all speak the same language. To accomplish the same for mobile networks, we use WAP. The need for WAP comes from low data transfer rates of mobile phones, inferior resolution of a mobile phone display as well as interoperability issues.

The mobile internet mainly utilises lightweight pages written in Extensible Hypertext Markup Language (XHTML) or Wireless Markup Language (WML) to deliver content to mobile devices. A markup language is used to add predefined tags or information to content which informs the device receiving the content what to do with it. WAP also allows the use of standard Internet protocols for smooth functioning of the Internet on various platforms. 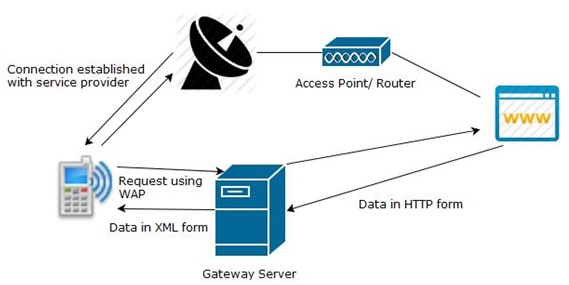 When using a WAP-enabled device for Internet access, the device sends out radio waves searching for a connection with the service provider. Once connection is made, a request is sent to a gateway server using WAP. This server retrieves the required information from the website in HTTP (standard Internet protocol) form. The gateway server converts the HTTP data to WML as it is compatible with the mobile web format. The converted WML data is then sent to the WAP client on the device with the mobile Internet version of the required Webpage. It is then passed to the web browser which acts as an interface between the mobile Internet and the user.

The WAP protocol stack determines the handshake between the gateway server and the WAP client. It also keeps data flow smooth, checks data integrity, authentication and encryption as well as adaptability to different network providers.

With technological advances third-generation (3G) cell phone technology, also known as Mobile Broadband has evolved. It brings with it near broadband data speeds, with video conferencing and GPS connectivity. A 3G network is one of the fastest mobile phone networks available with data transmission rate having around 144 kilobits/second. The SIM card used for accessing the broadband network works using the 3G standards like EDGE, CDMA, EV-DO etc.  The SIM card is powered by a USB modem and searches for the mobile signal. The connection manager software helps to establish a connection between the modem and a transmitting tower. After the sync is established, the data travels through the mobile signals in an encrypted format and reaches the tower. From the cell tower it reaches the internet cloud and fetches data. Mobile Broadband is one of the secured ways of data transmission as it works using a single IP address.

Nowadays, free Wi-Fi is commonly available in a lot of public places such as airports, cafes, college campuses etc. Wi-Fi (IEEE 802.11 standard) enabled devices get connected to the Internet through a wired Access Point which requires telephone lines or Internet cables to reach Internet routers. The access point is basically a Wi-Fi network setup to allow guest access to the Internet. A user has more control over Wi-Fi as it accesses an extension of a wired Local Area Network (LAN). The LAN usually works over a small distance and might have a cable or radio link connecting the access point to an ISP through routers. Wi-Fi operates at different frequency than 3G and is less expensive.

Due to the growing mobile Internet technology, websites built specifically for mobile phones are on the rise. Apart from the actual website, developers are now also focusing on creating mobile web-friendly sites or are building their sites into apps which make for good user experience. A mobile version of a web page aims to have the same content as that of the full page, but makes it a more text-based and low on graphics version suited for a cell phone’s LCD screen. Your phone usually redirects you to the mobile version of the webpage (if it is available), when you try to access the page from your cell phone. 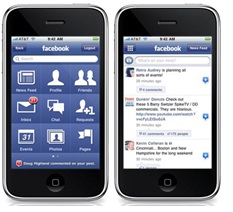 Like all growing technologies, even the mobile Internet technology has its limitations which service providers are trying to overcome. The most common of them are listed below:

1.    Limited navigation – For websites not suited for mobile phones, navigating the page on a smaller screen can prove to be cumbersome as there might be no scroll wheel or hoverbox feature. Pages broken up into separate segments can also hinder navigation.

3.      Size – The smaller physical size of mobile devices can have limits on resolution and graphics.

4.     Accessibility – A lot of websites do not have their mobile versions yet and some phones cannot access secured web pages. Compressed pages might be in a different format than the original website after conversion to the mobile web format. Sites which do not store cookies can also obstruct user experience.

5.    Incompatibility – The mobile web browsers might be incompatible with the mobile operating systems as well as the data available. Standardization of browsing protocols and data formats can solve this issue.

Mobile Internet is evolving every day with 3G being deployed and development of Fourth Generation (4G) communications supported by popular standards like GPRS, EDGE etc. 4G broadband systems are built for wireless mobile Internet service, providing high speed Internet while on the move. Mobile Internet has also paved the way for more innovation such as Android platform, apps and more!

Filed Under: How to
Tagged With: internet, mobile devices