Conventional robots are commonly used in heavy industrial tasks but have limited use in healthcare and the human body, where a different approach is necessary. To this end, Edwin Jager, an associate professor, along with his PhD student, Manav Tyagi, teamed with their collaborator, Geoff Spinks, to report some serious progress in soft microrobots. 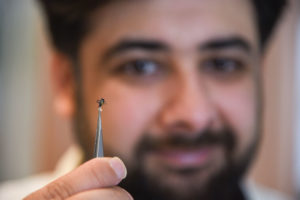 This microrobot is 3D-printed in a lab at the Bionics and Transduction Science unit.

In a recent paper published in Soft Robotics (SoRo), the team explained how new microrobots have a rectangular polymeric body with flexible micro-actuators attached, like limbs.

In fact, the 3D-printed gel based limbs comprising conducting polymers can be moved by electrically actuating them. The most noteworthy feature of these microbots, however, is their miniature size. They were able to constrict the robots to this scale with a customized, in-house 3D printer.

By far, it is the smallest robot simply printed from a 3D printer. The simplicity of this process is something that makes it unique.

“Twenty years ago, I did my PhD thesis on microrobots, using complex microfabrication, processed in a clean room,” said Jager. Two decades later, the process of creating microrobots gets much simpler and easier.

Applications
These microrobots have several potential applications and they hold an edge over conventional robots. This is because soft microrobots can easily be used in the creation of more realistic prosthetics. For example, micro-surgeries can use soft robots for better precision and a higher success rate. Higher compliance and flexibility of these bots make them less invasive and more useful in this field.

Moreover, these can be very useful in various other tasks like gripping, walking, releasing, and so on. At present, robots can perform all of the above-mentioned tasks when submerged in liquid but the researchers have a long-term goal of achieving the same movements in the air. They also wish to bless these robots with electronic intelligence by integrating microchips inside these.

Filed Under: News
Tagged With: softrobotics