In Part I of this tutorial, we learned how to present data (or values) using a potentiometer (POT) and an organic light-emitting diode (OLED) display. For this project, the POT was an analog sensor (potentiometers can also be digital), which acts as a resistor to control the flow of an electric current. The OLED technology uses LEDs whereby the light is produced by an organic molecule.

The soil-moisture sensor consists of two parts: a sensor probe and a sensor circuit. The sensor probe has two exposed conductors, which act as a variable resistor (much like the POT). Its resistance varies according to the water content in the soil. This resistance is inversely proportional to the soil’s moisture. 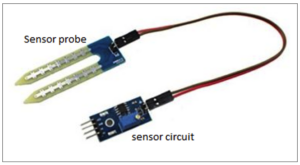 This probe is connected to the sensor circuit. The circuit is built using an operational amplifier (op-amp), which works as a comparator. As its name suggests, a comparator is a device that compares two voltages or currents. It then outputs a digital signal that indicates which of the two is larger.

For this project, it provides an analog and digital output. The analog output voltage is set between 0 to 5 V, as the probe resistance varies. The digital output is between 0 and 5 V, as per the threshold voltage set using the POT. A trimmer POT is used here. It is a variable resistor that can adjust or calibrate circuits.

The trimmer(or Trim POT) is used to adjust the sensitivity of the probe. Two LEDs serve as indicators.

The light-dependent resistor or LDR is also a variable resistor, but it works on the principle of photoconductivity, which means that its resistance depends on the intensity of the light. It’s made up of cadmium sulfide (Cds) material. When light hits this material, the photons lead to an increase in conductivity.

This change in resistance is converted into an analog voltage output of between 0 and 5 V using a pull-down resistance. 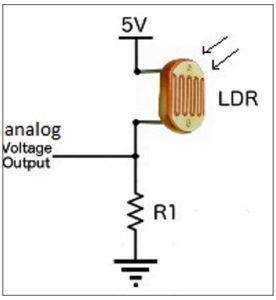 For this project, we use an LDR module that has the same circuit arrangement with three pins. 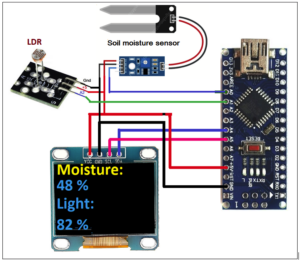 Circuit connections
This circuit is built using only four components: an Arduino NANO board, the OLED display, an LDR module, and the soil-moisture sensor. 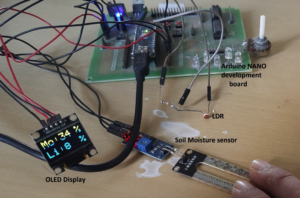 Software program
The Arduino board microcontroller (ATMega328) performs these tasks when using the below program:

1. Reads the analog voltage output from both sensors
2. Converts the sensor data into a percentage range (between 0 to 100%)
3. Displays the sensors’ data values on the OLED display