In Part I and Part II of this series, we learned how to use an analog sensor — including a potentiometer (POT), a light-dependent resistor (LDR), and a soil-moisture sensor — to present values on an organic light-emitting diode (OLED) display.

In Part III, we’ll also present data on an OLED display, but this time using a digital temperature and humidity sensor, the DHT11.

Refer to Part I for a discussion about the basics of an OLED display and how to properly interface it with Arduino.

The DHT11
The DHT11 is a low-cost digital sensor that senses temperature and humidity. Humidity is the measure of water vapor that’s present in the air.

There are two types of humidity sensors, based on their measurement units:

The DHT11 measures the relative humidity in the environment. To measure the temperature, this sensor uses a thermistor. It also has an in-built chip (IC) that provides an analog-to-digital conversion and the digital signal output as the temperature and humidity.

Working principle of the DHT11
Along with the thermistor, the DHT11 sensor has a capacitive humidity sensing element. This capacitor has two electrodes with a moisture-holding substrate that serves as a dielectric, which is an electrical insulator, between the two.

The in-built chip measures this change in resistance and converts it into a digital value in Celsius.

For this project, we use the DHT11 module, which can easily and directly connect with Arduino. This sensor has one 10K pull-up resistor, which connects between the VCC and data-output pins. It only has three pins instead of the typical four. It also has a power ON LED indicator. 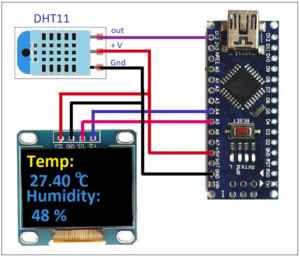 Circuit connections
The circuit is built using only three components: 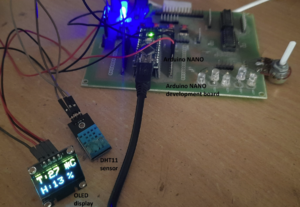 Software program
The Arduino board microcontroller (ATMega328) performs these tasks because of the below program: