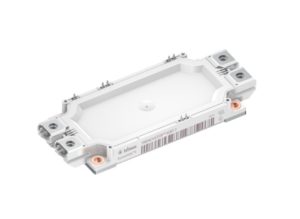 With the broad range of current classes from 300 up to 900 A, the portfolio offers inverter designers a high degree of flexibility while also providing increased power density and performance.

In addition to solar and drive applications, the portfolio is also tailored for commercial, construction, and agricultural vehicles, as well as for uninterruptible power-supply (UPS) inverters.

Based on the new micro-pattern trench technology, the EconoDUAL 3 with the TRENCHSTOP IGBT7 chip performs with much lower static losses compared to the modules with an IGBT4 chipset.

Additionally, its on-state voltage is reduced by up to 30 percent for the same chip area. This brings significant loss reduction in applications, especially for industrial drives, which usually operate at moderate switching frequencies. The oscillation behavior and the controllability of the IGBT have been improved. The new power modules feature a maximum overload junction temperature of 175° C.

The new chip dimensions enable optimization of the module layout to reduce switching losses. As a result, the switching losses for the 600 A module are reduced by up to 24 percent compared to the former generation. This leads in a simplified design-in for applications with a higher switching frequency.

Furthermore, all features can be implemented in the same footprint facilitating the upgrade of existing inverter system designs. With the extended 750 and 900 A versions, the EconoDUAL 3 package addresses an improved inverter power range. The PressFIT housing also enables a fast and cost-efficient assembly.