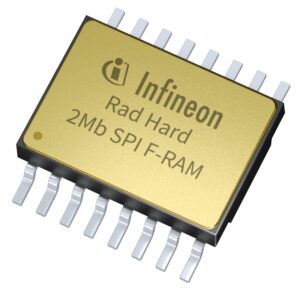 The new devices deliver unsurpassed reliability and data retention and are more energy efficient than non-volatile EEPROM and serial NOR Flash devices for space applications.

As a direct replacement for serial NOR flash and EEPROMs, the rad-hard F-RAM is ideal for data logging of mission critical data, telemetry storage, as well as command and control calibration data storage. The new device is also ideal for providing boot-code storage solutions for microcontrollers, FPGAs, and ASICs.

“The newly introduced rad-hard F-RAM devices have superior write capabilities with lower power requirements than alternatives, and support system designs with fewer components, improved performance, and no compromise in reliability,” said Helmut Puchner, VP Fellow of Aerospace and Defense at Infineon. “We look forward to bringing more industry-firsts to the space market.”

The 2 Mb density F-RAM with SPI is the first in its family of rad-hard non-volatile F-RAMs. The devices have virtually infinite endurance with no wear leveling, with 10 trillion read/write cycles and 120 years data retention at 85° C — at an operating voltage range of 2.0  to 3.6 V.

The lowest operating current is 10 mA maximum, with an extreme low-programming voltage of 2 V.

The rad hard F-RAMs are also suitable for avionic and other applications that require military standard temperature grades reaching from -55° to 125° C. Additional features include a small footprint with 16-in ceramic SOP packaging.

The DLAM QML-V qualified devices have superior radiation performance of: