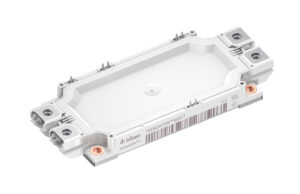 Infineon Technologies has launched the new TRENCHSTOP 1700 V IGBT7 chip in the standard industrial package EconoDUAL 3. With this new chip technology, the EconoDUAL 3 provides currents of 900 A and 750 A, enabling an improved power range for inverters. The modules target a wide range of applications including wind, drive, and static VAR generators (SVG).

Along with the best-in-class 1700 V EconoDUAL 3 with 900 A, a 750 A module with a larger diode has also been introduced to further increase the flexibility of the new portfolio. Overall, the new EconoDUAL 3 1700 V modules with the TRENCHSTOP IGBT 7 chip can increase the power density of the inverter and achieve a new level of performance in a wide range of applications.