Megatrends including digitalization, urbanization, and electromobility all equate to an increase in power consumption. At the same time, energy efficiency is more important than ever. 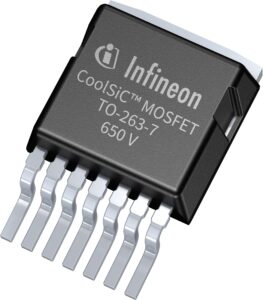 The trench technology is the basis for superior gate-oxide reliability. Together, with an improved avalanche and short-circuit robustness this ensures the highest system reliability even in harsh environments. The SiC MOSFETs are suitable for topologies with repetitive hard commutation, as well as for high temperature and harsh operations. Thanks to a very low on-resistance (RDS(on)) dependency with temperature they show an excellent thermal behavior.

Featuring a wide voltage from gate to source (VGS) range from -5 up to 23 V and supporting 0 turn-off VGS and a gate-source threshold voltage (VGS(th)) greater than 4 V, the new family also works with standard MOSFET gate driver ICs.

Additionally, the new products support bi-directional topologies and full dv/dt controllability, offering reduced system cost and complexity, as well as ease of adoption and integration. The .XT interconnection technology significantly improves the package’s thermal capabilities. Up to 30 percent extra loss can be dissipated compared to a standard interconnection. With ten new products, the Infineon D2PAK 7-pin portfolio of SiC MOSFETs is the most granular in the market.