You may know how to drive or you are just like me who always tag along as side kick, but there is one part of automobile that is voluntary known to each one of us “Speedometer”. You may not be driving but one step on accelerator by the driver and you are squirming on your seat just as the needle on the meter. Ha!

We have never really thought how does a needle move on the meter?  What makes the number change on odometer? We look at speedometer but never really notice it. But not anymore join me in this insight to learn all about speedometer. Right from its structure, to wiring to calibration everything is devised with perfection. The moment you start your vehicle the speedometer starts working.

Let’s begin our insight with the external part.

Fig. 1: Image Showing External Side of A Typical Analog Speedometer

The external view shows a circular display unit placed on a metallic cup.  Display system is surrounded by chrome metal to provide it an extra finish.

This is the part important to all of us because all the information processed by the speedometer mechanism is displayed here. While the needle moves along the numbers to indicate speed, the odometer shows the distance. Bottom part is occupied by indicators. The last image is back part of the display unit. The Marking on the front is green due to the green colored back surface. Color selection depends on the manufacturer.
External back view:

Bunch of wires of speedometer assembly can be seen. Important parts to be observed are rubber holders and a driver cable holder.

Fig. 3: Rubber Cables and Holder Present In An Analog Speedometer

Rubber holder holds the bulb used to illuminate indicators. From the outside there is nothing catchy about the holder, just a place to set the bulb. But digging deep, it presents a well thought design. When we pulled out the bulbs we saw four terminals hooked to rubber casing. They are terminals help in griping the bulb tightly against mechanical shocks and provide electrical power.

A bulb with ratings 12V and 1.7 watt is used in device. The wires coming out of the bulb are turned at the end in opposite directions which ensures proper grip with the terminals of the holder. These wires make contact with the copper terminals as shown below. 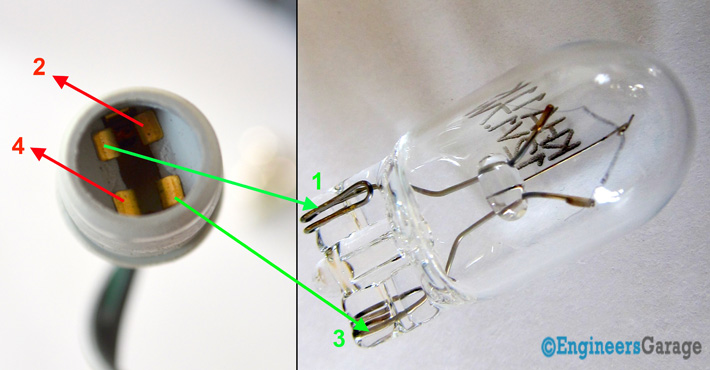 The bulb is placed in the holder and makes contact with terminal 1 and 3 always. Terminals 2 and 4 provide the grip that keeps the bulb in position.This is just the external design; heart of the speedometer is inside the metallic cup where the speedometer assembly is placed. Knowing the parts will help in understanding the speedometer.

After removing the screws, speedometer assembly and colored reflectors are visible. Four circular holes are cut on the metallic cup, smaller three for the bulbs and slightly larger one for driver cable holder. This design allows the person to easily replace the defected bulb without disturbing other assembly. The colored reflector is responsible for converting the incandescent light into different colors on indicators.From the above parts we know basic designing of speedometer now, we will understand how rotation of wheel affects the speedometer? How is wheel and speedometer connected to each other.
The most important part that initiates the working of speedometer is a driver cable. The driver cable is like an input to the speedometer. One end of the cable is connected to the wheel while other is attached to the bottom part of speedometer assembly. It rotates with the wheel and transfers this rotation to the speedometer. The image below shows the driver cable. 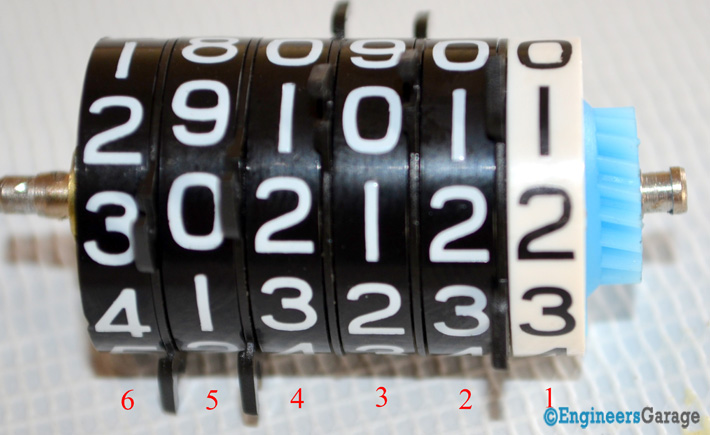 The driver cable is inserted at the bottom part of the groove and is attached to gearing mechanism of the wheel. The rotation of wheel causes driver cable to rotate. The cable in turn rotates the spiral groove.

Now, we move ahead to understand how the movement of needle takes place. This is yet another part which proves that speedometer is a well thought design. The designer’s preference for the particular materials comes into picture here. How they have used the eddy current losses in working of speedometer. So let’s start!
Entire speedometer assembly is held by a frame attached to the bottom part carrying spiral groove. There are two separate mechanism undertaking in device one to indicate speed and other to show distance.  Both the mechanisms are initiated by the rotation of spiral groove.
As we know working of speedometer depends on eddy current, we will revise the concept on eddy current in brief.

Eddy currents- are electric current generated in the conductors (aluminum cup in speedometer) due to changing magnetic field (produced by magnet in the cup). The circulating currents have inductance and thus induce magnetic fields. These fields can cause attraction, repulsion, drag and heating effects. The stronger the applied magnetic fields faster and greater are the effects. Now let’s move ahead and understand how eddy current comes into picture of speedometer assembly 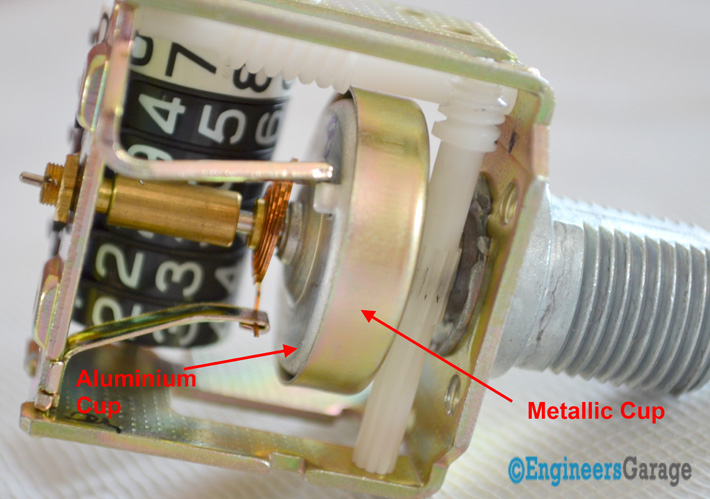 Speedometer mechanism assembly includes two cups, magnet, and pin with a spring around it. The first cup shown in the above figure holds the magnet. The spiral groove passes through the first cup carrying the magnet. So, when the vehicle is in motion, its turns the speedometer cable which in turn rotates the spiral groove. The cup holding the magnet starts rotating with the rotation of spiral groove and generates a rotating magnetic field. We are unable to see the magnet in the cup as the magnet is covered from top by this second cup which is made of aluminum. This cup is known as speed cup as the speed of the needle depends on this cup.
Let’s have a clear positioning of magnet by lifting the aluminum cup (speed cup) from the top.

We can now clearly see the magnet placed inside the cup and the image 2 shows the aluminum cup that is placed above it. Now, the cup holding the magnet also is separated from the groove so we can see each part inside it clearly. 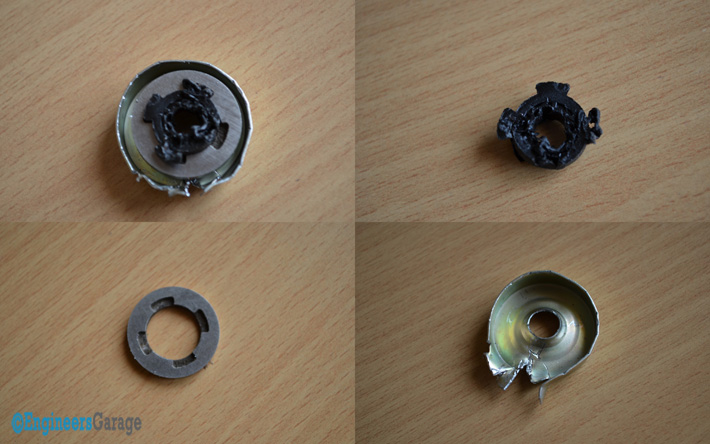 As we know the rotation of magnet produces a fluctuating magnetic field inside the aluminum cup. By the law of electromagnetism, fluctuating magnetic field produced electric current. This current is restricted to the speed cup as there is no place for escape and move aimlessly. They are known as eddy currents. These eddies also have associated magnetic field with them by the law of electro-magnetism. Now, we have two magnetic fields and a torque is exerted on the speed cup. This torques rotates the cup and thus moves the speedometer needle.
The needle on the display is in contact with the pin fixed to the cup. This pin is known as revolving pin. Let’s have a clear view of the revolving pin.
Revolving Pin 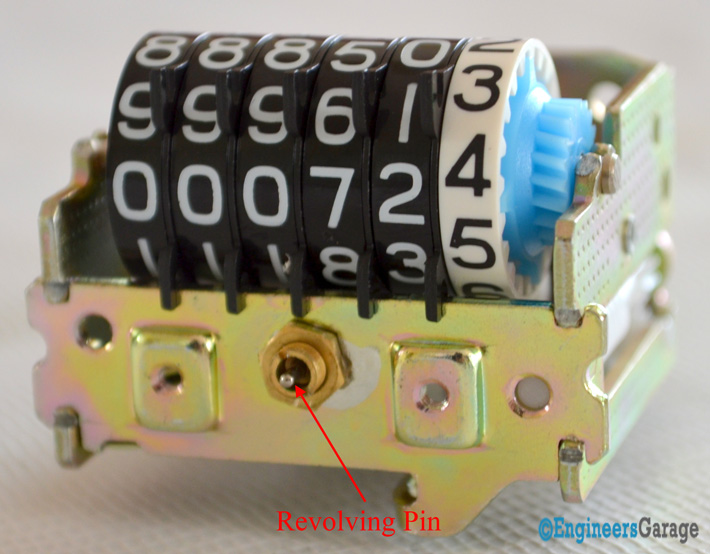 After removing the reading panel we observe a revolving pin.The needle is directly connected to this revolving pin. The rotation of pin is directly proportional to speed of the vehicle.
With this concept in mind now we move to the working of speedometer. 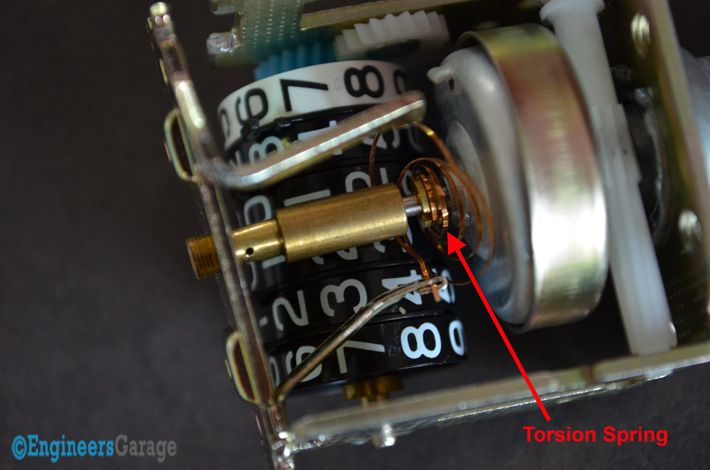 Interesting fact about the design in this part is spring wrapped around the revolving pin that passes through the center of aluminum cup and a teeth present at the back of the speed cup. One end of spring is connected to the revolving pin while other is held by hook connected to the outer frame. This spring and hook restores the movement of the needle.
At a given speed the pointer will remain motionless and points to the appropriate number on speedometer’s dial. As the torque on the cup increases, the movement of the revolving also increases. However, the tooth on the cup only allows limited movement to the needle. The spring allows the flexibility to the movement of needle. Let’s move on the second mechanism. 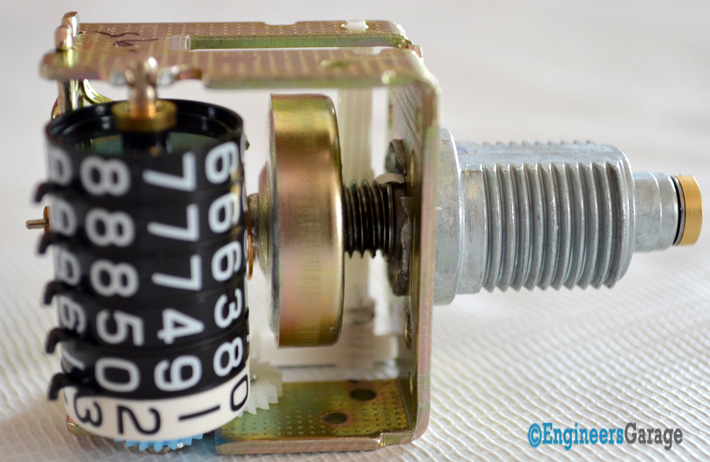 An odometer measures the distance a vehicle travels by sensing the rotations of a wheel of a given circumference. Working of odometer depends on the spiral groove and gears. The four gears in the speedometer assembly starts the connected motion.
Next section gives a clear picture of positions of each gear in speedometer and how they are used in odometer working. 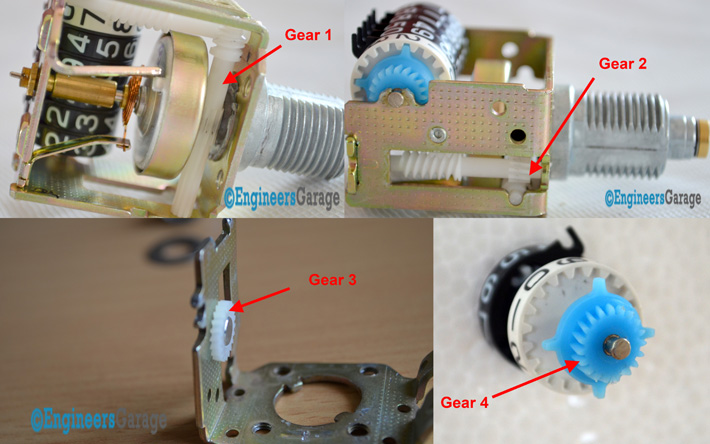 Fig. 17: Image Showing Position and Working of Gears In Speedometer

Gear 1 is placed directly below the cup with magnet and in contact with the spiral groove. Gear 2 is present vertically on the gear 1.With the rotation of groove, gear one is set into motion. Motion of gear 1 leads the rotation of gear2.Removing the display part Gear 3 becomes visible. It is connected to the frame stand. Gear 4 is positioned is above the gear 3. Gear 4 is the one in contact with the odometer assembly.Let’s separate these rings and see how each ring is connected to other and makes other to rotate.

Image above shows how a small gear is present on the back of ring1 while image 2 shows the front part of the ring 2.
These gears have teeth on them. As the spiral groove moves, it rotates the gear 1 which is in contact with it. The movement of gear 1 sets the connected motion with other gears.
When we separate each ring we observe that each ring is in contact with a small gear which allows the rotation of other rings. So, after 10 rounds on first ring, the gear on the first ring locks the gear on second and moves it one point. This process is carried on again and again. For example gear 4 moves the ring1untill it complete one round (0-9) then the small gear between the rings locks with the second ring. Image below shows the arrangement of two consecutive rings, starting from gear 4, then ring 1 with a small gear at back and finally ring 2. 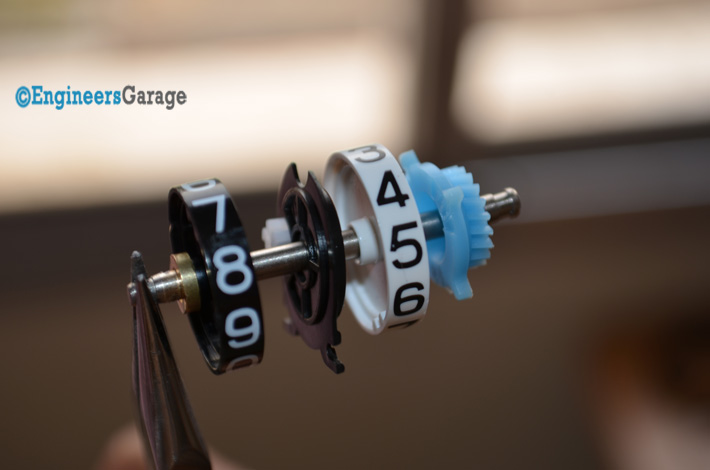 Odometer is formed by a bunch of circular rings with numbers printed over them passing through a thin rod shown in the image above. The Gear 4 moves the ring 1. When ring 1 completes 10 rounds (0-9) adjacent ring 2 moves by 1 point. In the same way ring 2 completes 10 rounds will move the wheel 3 by 1 point. This process continues till wheel 6. 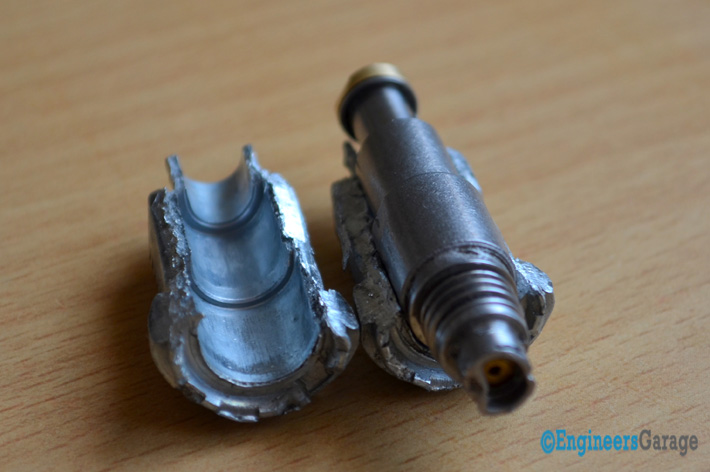 On removing the gear 4 a spring is observed. It keeps the rings intact and the Grooves made on the ring allow the gears to move easily.
Filed Under: Insight, More Editor's Picks
Tagged With: analog, insight, speedometer