This component needs no introduction. One of the first semiconductor based engineering components, diodes are an indispensible necessity for any current modern gadget or circuit. They are the basic logic block – the most fundamental unit.

These two terminal-ed nonlinear passive elements ideally conduct only one way and hence protect the circuit as well as the source from any damage. Diodes are widely used in rectifier circuits, limiters, communication circuits, multiplier circuits and signal clippers as well as clamper circuits. This Insight will give an in depth view of a diode’s physicality.

The diode that is explored in this Insight is IN5408, which is a type of power diode.  The core of the diode is enclosed in an epoxy that protects the semiconductor from ambient adversities. This epoxy molding is black colored, marked with the diode number on the center and a silver colored band at one end – the band labeling that end to be the diode’s cathode. Connected to the epoxy at both the ends are two electroplated leads. These leads are able to withstand high temperatures and provide good soldering properties. 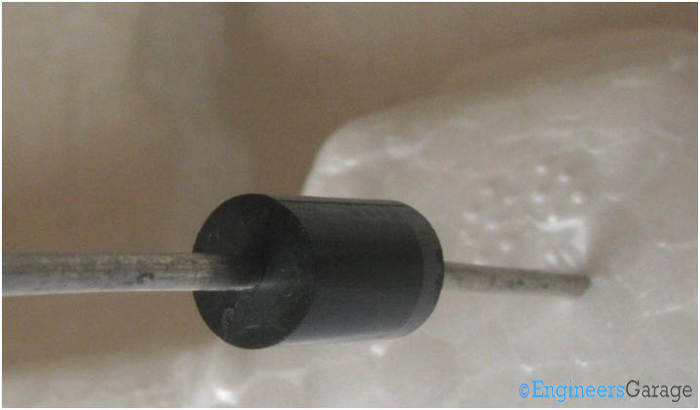 It can be noticed that the manner in which connecting leads are placed inside the epoxy is interesting and shows precision in the manufacturing process. The leads are 0.048 to 0.052 inches thick and fit in the centre of the 0.190 to 0.210 inches thick shell.

The epoxy shell is quite thick and forms the majority of the internal structure. When packed in this manner, the shell not only provides a resistant sheath to the diode but also gives it mechanical strength. It is resistant to fire.

Fig. 4: Epoxy Cell and its Casing

Further excavating the epoxy shell, the leads are found to be connected to a white colored oval shaped structure. On close examining it is found out that the leads are finely soldered to the shell. Also, the shell is quite sensitive to any mechanical forces and that justifies the need for a tough and dense epoxy shell casing over it. On scraping off the outer coating, the shell gets exposed. A white colored, thin rubber coating surrounds the metallic shell of the diode. This coat acts as an insulator and gives a uniform separation to the epoxy layer and internal structure of the diode. 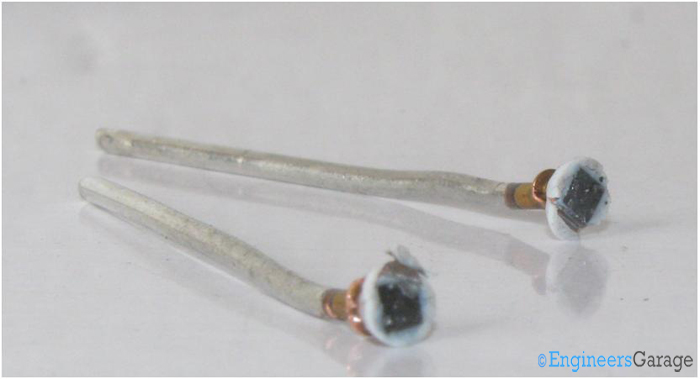 When the metallic shell is split into two, the internal semiconductor layer becomes visible (see Image 07). It is almost impossible to identify the two terminals visually.