We currently live in the era of speed and sophistication. Everything that man once developed and found to be too time consuming and cumbersome has been modified, altered and compacted to make its use more simple. To cope up with this speed, every routine work has been automated. This pursuit of professional excellence has forced people to spend less time on themselves. For example, shaving is almost a daily chore for men to ensure personal hygene and needs to be done fast. But doing so with manual razors is a time consuming job and if done to hastily, can lead to cuts and burns.

But thankfully, the technology of this age offers replacement to old age instruments like manual razors and frequent visits to a barber shop by time effective handheld devices like hair clippers and beard trimmers. Unlike manual razors and scissors, trimmers are devices that cut, but don’t bite and that too in very less time. But how do these little devices ensure such high fidelity cut each time? How can they trim hair in less than quarter the time taken by a manual razor or scissors? These devices run on electric energy, but did you know that the major component that makes them achieve their function is not the seemingly complex electric circuitry but the mechanical assembly? How can a trimmer battery last and why? What happens when the battery goes dead? The answer to every such question lies inside the machine itself, and we are about to discover why. 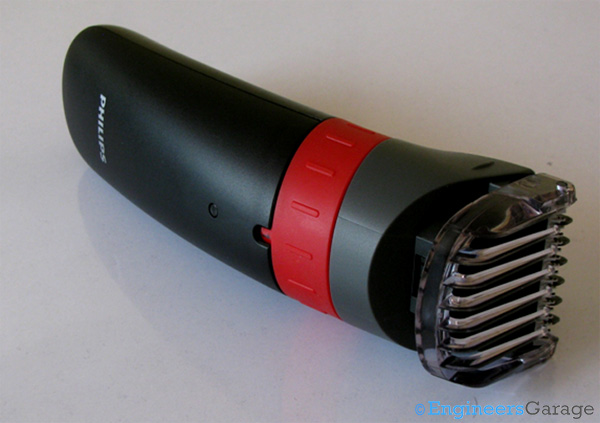 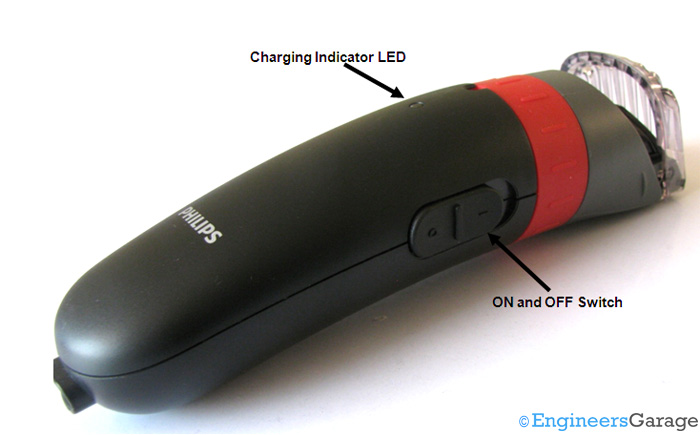 Enclosed in a durable plastic casing, the beard trimmer shown above is a sleek handheld device that can be gripped easily. Hardware clutter has been avoided with a single slider switch for turning the device ON and OFF. The switch, being on the side, gives an easy access to the switch with the thumb even during the trimming process.
[header= Shave Head]
Shave Head 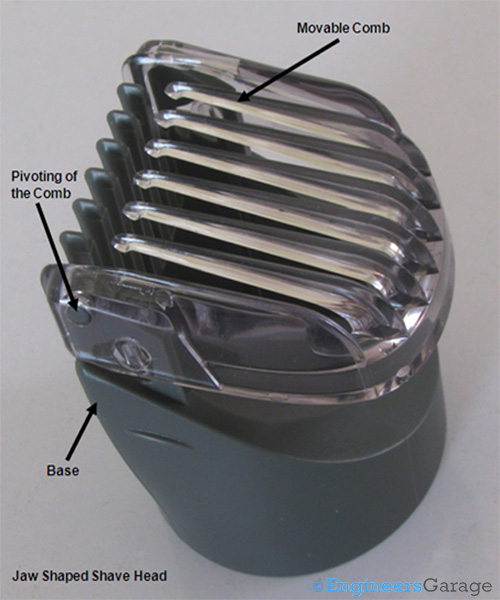 The removable shave head comes into contact with the beard during the process of trimming. The comb structure of the shave head gives a smooth glide to the shaver when it is moved on the cheek. It also makes sure that when the blades of the trimmer come in contact with bare skin, they are unable to hold onto them. This optimizes the trimming blades with the beard length so that various trimming lengths can be achieved as per user’s requirements. In order to cut tiny facial hair or trim them to a minimal length, the shaving head can be removed too. It consists of two parts, a base and a movable comb. The comb is pivoted at the sides of the base as shown in the image above.Comb helps in untangling facial hair so that there is no unnecessary pulling of hair resulting in injury to the user. The base too has a comb like pattern on its upper side so that the blades of the cutter can be accommodated. The base as well as the comb is made of ABS (Acrylonitrile – Butadiene – Styrene) Plastic. The whole body of the trimmer is also made from this ABS plastic. This plastic is tough and can stand high vibrations as well as temperature. A heat retardant, ABS plastic body protects the user from fire or shocks due to short circuits. 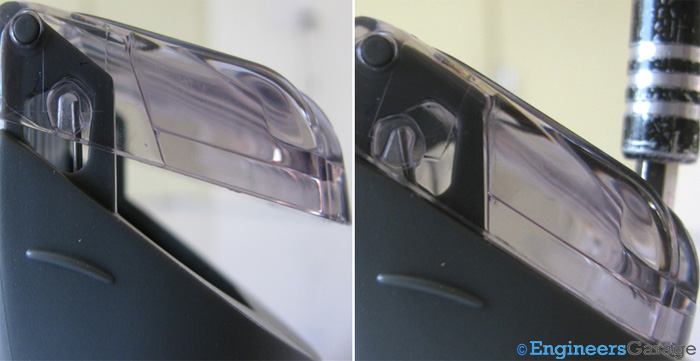 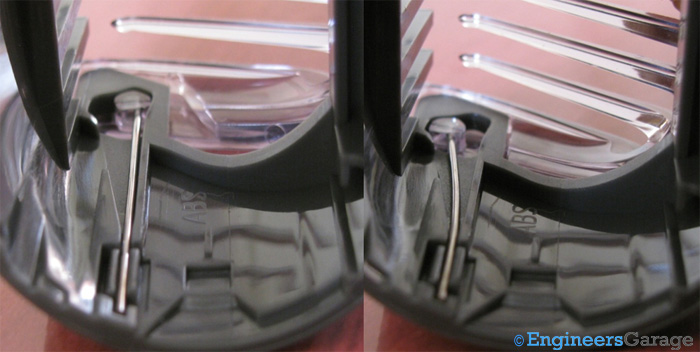 Jaw Open: Position of Steel lever                     Jaw Closed: Position of Steel lever  (Notice the bend)
The comb rests in such a way that shave head looks like an open jaw.  This position as well as the flexible movement of the jaw is maintained by a pair of thin steel rods. These rods are elastic and function as levers. As shown in the image above, one end of the steel rod is fixed on the inner side of the base while the other end is placed inside a small shell of the comb. The shell is allowed to move freely inside a frame that has been cut near the part where the comb is placed on the base.
In the rest state of the comb, the lever is straight (right image) and the shell is placed on the upper side of the frame. When the comb is pressed down, the lever bends so that the shell gets placed on the lower side of the frame. The comb bends to make contact with the base and close the jaw shaped structure. As soon as the force of pressing the comb down is released, it moves back to previous position. Without the lever, the jaw would have been in the closed state and the shave head would have lost its utility of smoothly aligning the shaver with the beard.
Both the shell and the frame are carved such that no sharp edges are in contact whenever the comb is at rest or in pressed state. In plain words, the shave head is just a mechanical spring structure that resembles a human jaw. This structure however, helps in trimming hair lengths that can be as short as 4 mm or as long as 18 mm.
[header= Cutter]
Cutter 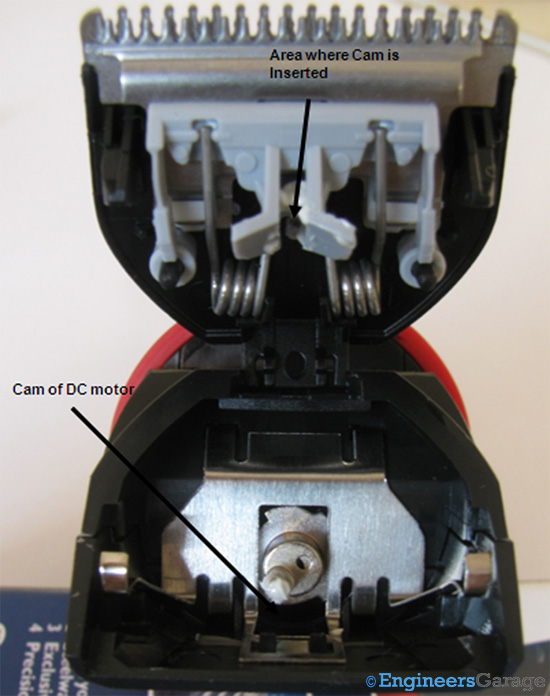 The cutter and DC motor combine to form to trimming section of the device. The upper shaft of the DC motor, also known as cam, is inserted in the middle part of the cutter assembly and makes an elliptical motion which further facilitates the to and fro motion of the blades possible. 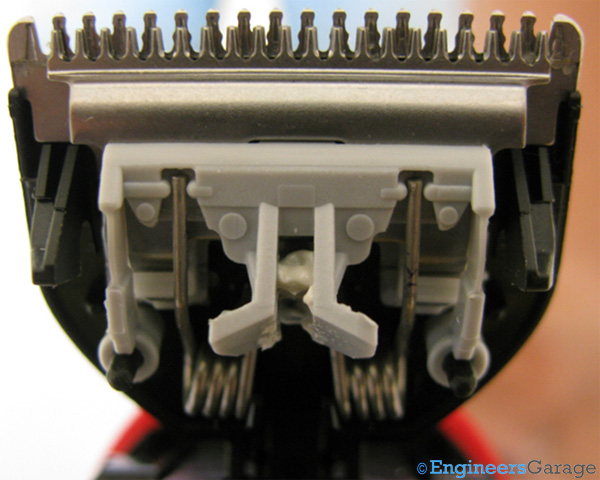 As the name suggests, the cutter is the part responsible for trimming facial hair. It lies under the shave head and has the blades protruding out of it. Besides the blades, the cutter assembly comprises of a spring, a base that has hooks to hold the blades. 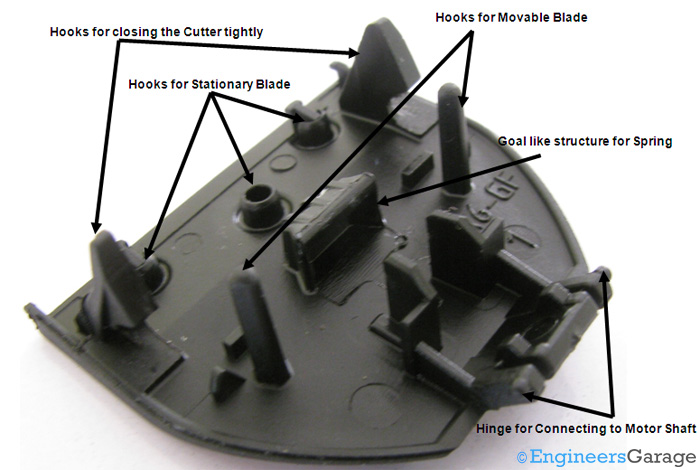 Shown in the image above is the base of the cutter. Made from plastic, the base holds all the parts of the assembly as well as a hinge that connects to the DC motor.  The base can tolerate high speeds of the DC motor and has mulitple number and types of hooks and holders that keep the assembly intact.

There are two blades in the cutter assembly which are made of stainless steel. Out of these, one is stationary (right image) while the other oscillates in to and fro motion (left image). The stationary blade has slots on its structure so that it can be firmly held on the base. The movable blade is placed on a plastic support and is propelled by the cam of the DC Motor. The support holds this blade to the base of the cutter assembly. This flexible support has a lubricated trough over which the shaft of the DC motor is placed. This shaft revolves on its axis providing motion to the blade.The motion of the movable blade makes one cut while covering one oscillation. 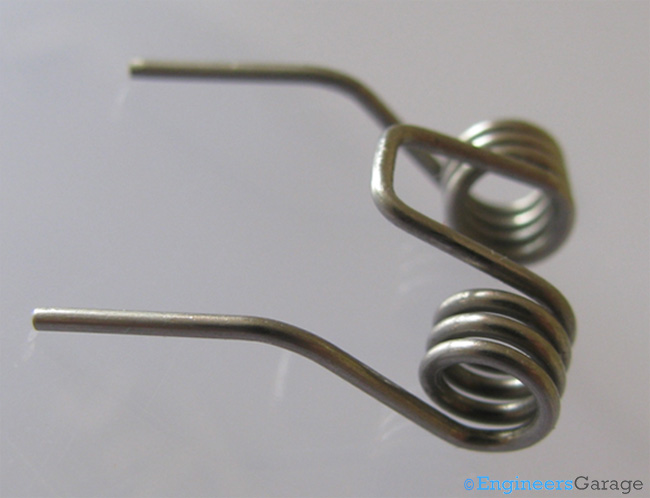 Shown in the image above is the bicycle handle shaped spring of the cutter assembly.  The two legs of the spring are placed on the plastic frame of the movable blade while the central part is tightly positioned at the small goal like structure on the base. The DC motor is powered enough to cause vibrations in horizontal as well as vertical direction. The shape of the shaft is elliptical which covers horizontal as well as vertical motions.  The spring structure restricts the motion of the movable blade only to horizontal directions providing stability to the blade structure.
[header= DC Motor]
DC Motor 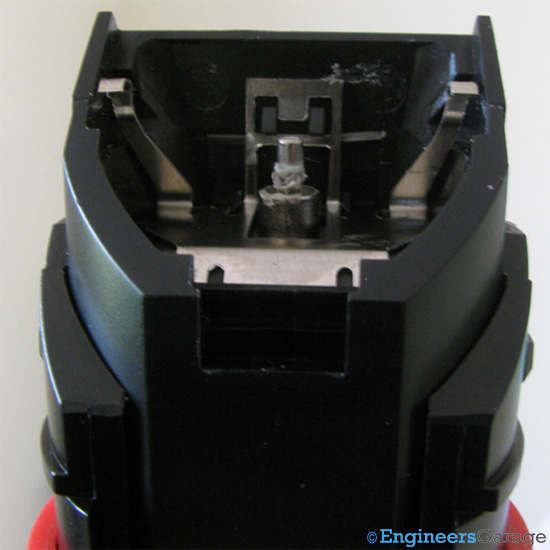 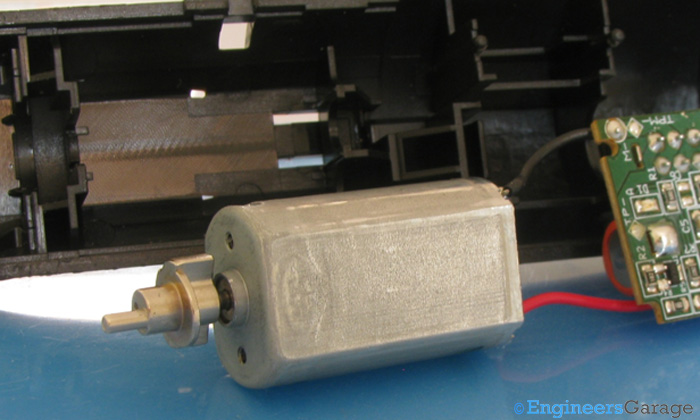 The DC Motor drives the cutter assembly. Usually, speed rendered by a DC motor is around 6,000 RPM.  Some improved models can give can RPM in the range of 8,000 to 10,000.
DC motor makes the movable blade oscillate at a quick pace. The trimming takes place when the movable and stationary blades overlap each other, pinching the hair off the skin. The blades are sharp enough preventing the hair follicles from getting pulled and causing bruises on the skin. In one elliptic path, the two blades cut when they are the closest to each other, and hence, one smooth cut per oscillation. 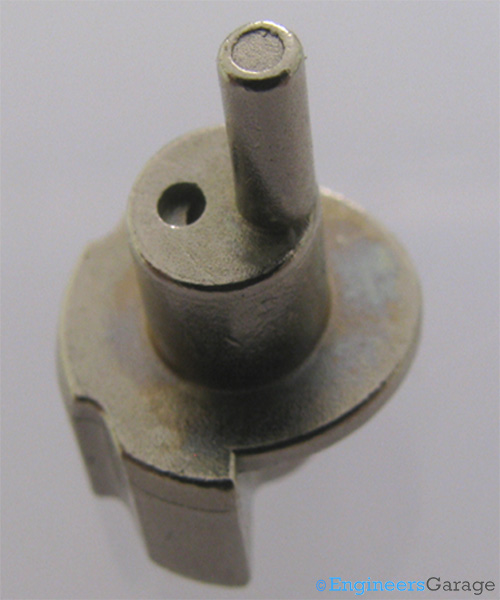 The cam of the DC Motor is ovular in shape and has a projection which is placed inside the lubricated part of the plastic support of movable cutter blade. The projection is at the periphery of the shaft to produce the elliptical motion. The overall weight and shape balances the center of gravity and stabilizes the shaft especially in the case of high RPM.
[header= Trimming Depth Adjustment]
Trimming Depth Adjustment 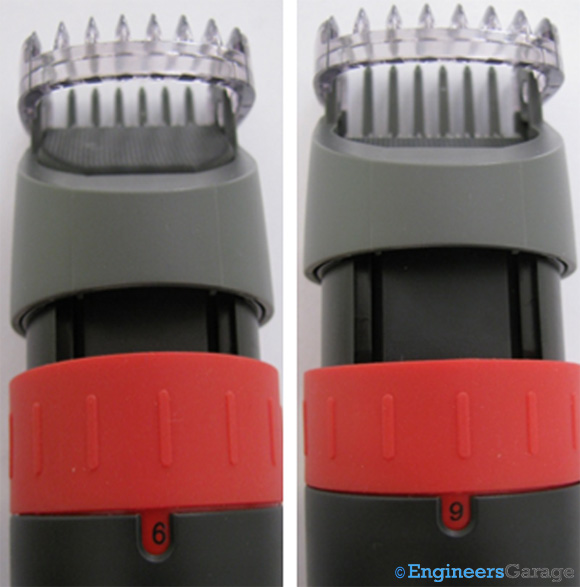 The length to be trimmed can be customized by varying the distance of the shave head from the cutter. The more is the distance, lesser is the length of hair trimmed. A number of trimmers have a simple slider to position the shave head. A new rotary mechanism is used by to ease the trimming mode selection process. 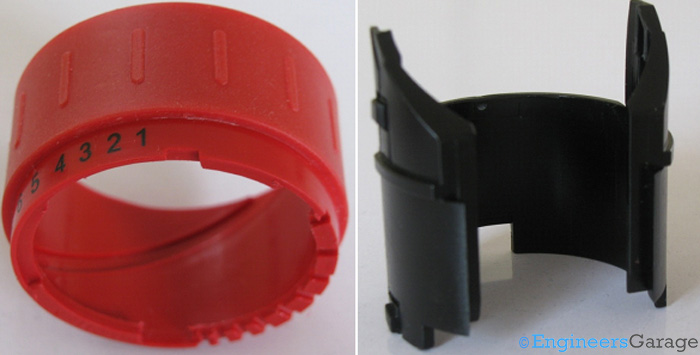 Image above shows the internal circuitry of the trimmer. It consists of two parts:
1.Regulated Power Supply 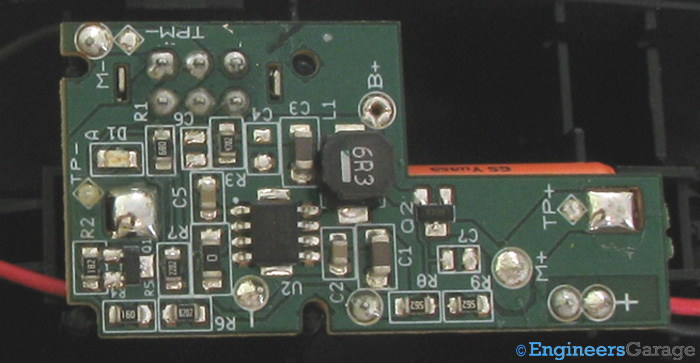 On the PCB is the only electrical part of the trimmer and its function is to provide regulated power supply to the motor. It also contains circuitry to charge the battery for cordless operation. From the front side, it has surface mounted ICs and various other components while the back side has a battery and a slider switch. An LED is also provided on the front part to indicate that the trimmer is in charging mode.  The IC used is a ST 3S01 IC which is designed to quickly charge batteries. 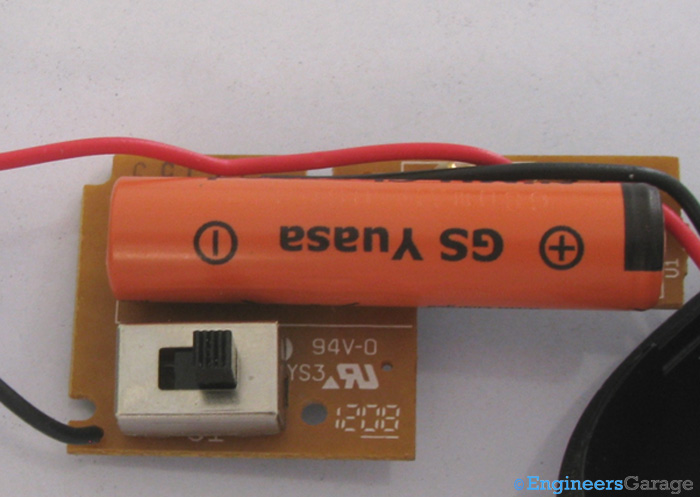 The reverse side of the PCB consists of a NiMH battery and a slider switch. It takes the NiMH battery approximately 10 hours to get fully charged so that one can use it continuously for 35minutes. 35 minutes is more than enough for any trimming process and even though it might seem less as compared to the charging time but given the RPM of the DC motor to be in the range of 6000-8000, it is quite satisfactory. When the batteries die out, the motor receives no power and blades, even though being sharp enough, cannot trim the beard for they have no driving force,

The slider switch is connected to the ON-OFF switch of the motor through a hook as shown in the image above. This facilitates easy switching of the trimmer between ON and OFF states. 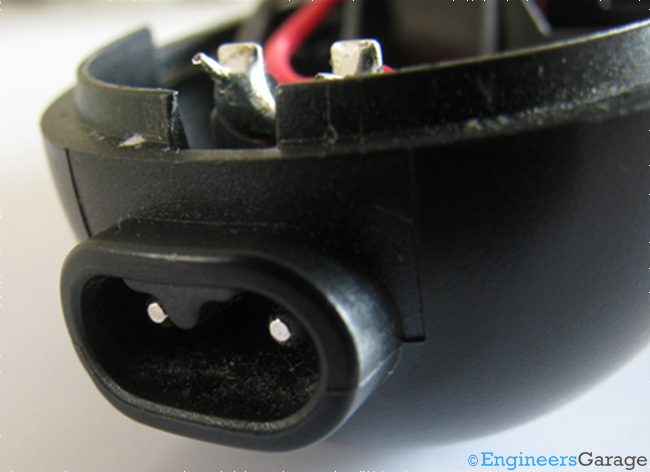 Since electric trimmer is a portable device, charging through USB is also available in select brands. One can then charge the trimmer from computer as well as conventional electricity plugs by using an adapter.
The electric trimmer is thus a very fine assembly of mechanical (Shave head and cutter), electronic (PCB) and chemical (NiMH Battery) parts that fits right into ones hand and delivers a smooth trim every time it is used. Though commonly known as an “electric” device, the electric part of the device has a very tiny role to play in its actual function.
Filed Under: Insight
Tagged With: beard trimmer, dc motor, electric beard trimmer, motor, trimmer