Continue to Site
Fountain pens are known among men with a penchant for delicate and high quality calligraphy skills. These come highly recommended for anyone who is new to ink based writings. The royal touch and metallic finesse with which these pens are manufactured is a soft reminder of their rich past, rendering to them an aesthetic appeal of yesteryears. Invented in the late 19th century by Lewis Waterman, fountain pens have undergone several improvisations under several legendary brands like Parker and Sheaffer.  Available in multiple designs, fountain pens are very interesting objects. 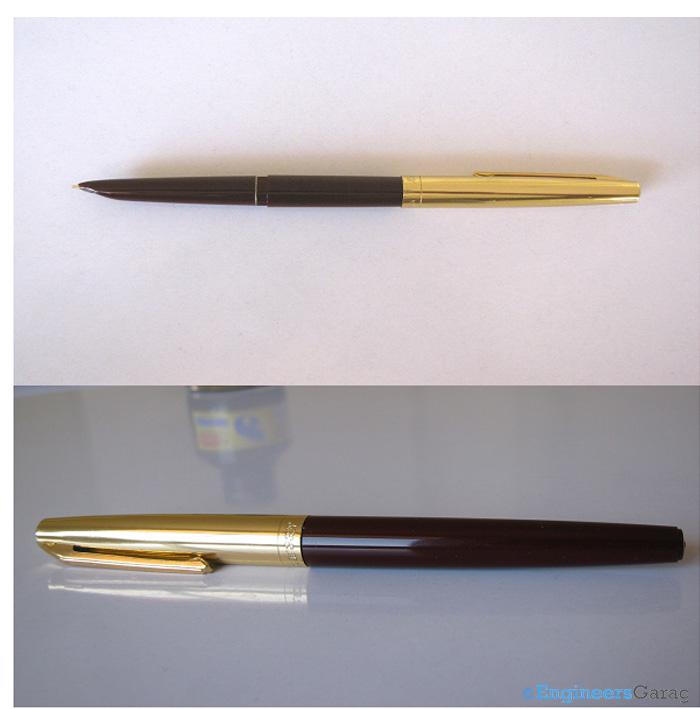 The images above show a traditional hooded fountain pen. Chinese are credited for the invention of such type of design. The body of the pen, termed as barrel, is generally made from plastic resin and the cap is chrome plated steel. 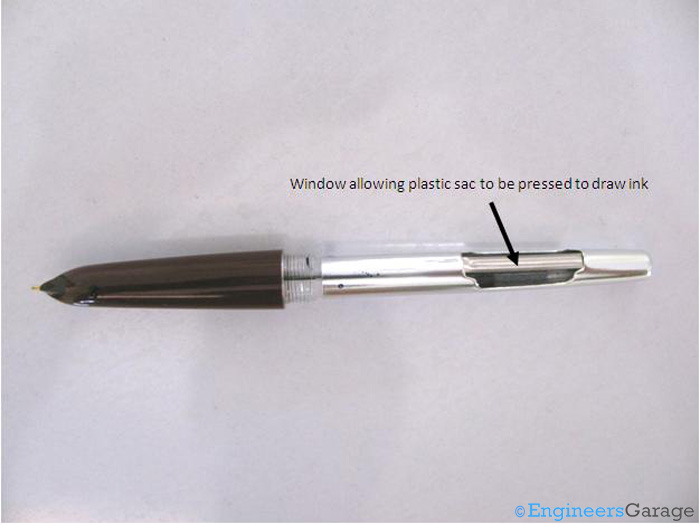 The internal structure of an ink pen varies with each manufacturer, but generally depends on the type of ink filling mechanisms used.  Several mechanisms for ink filling exist, depending on the suction method used which could be vacuum based filling or capillary based. Mechanisms like cartridge filling, piston filling, plunger filling and squeezer filling have been widely used. The ink pen shown above uses suction based squeezable ink refilling mechanism in which, a plastic or translucent rubber sac enveloped in a steel sheath forms the core of the refill mechanism. The steel sheath has a window through which the plastic sac can be compressed to fill the ink.

In the sac is a capillary tube. In order to fill ink, the pen is dipped inside an ink pot and the sac is compressed. The compression lets out the air present in the tube and when the pressure is released, the ink is sucked into the cartridge to replace the volume of air that was expelled by squeezing. Repetition of the cycle two or three times generally fills the cartridge to its maximum volume. 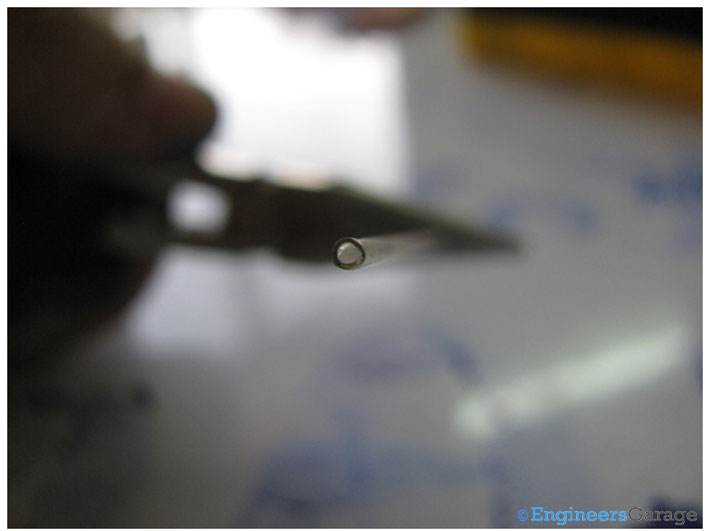 Shown above is the cross section of the cartridge of the pen. It is inserted on the other side of a black colored feed which is placed near the nib. The ink is filled and released from the cartridge due to a phenomenon known as capillary action which is also responsible for the rising of liquid on its own, inside plant stems.  Capillary action takes place when a tube with very small diameter (capillary) is placed on a liquid surface. The adhesive forces between ink and the walls of cartridge forces the liquid to climb those walls. This rise in liquid level depends on how narrow the tube is and hence, the cartridge is kept quite narrow. 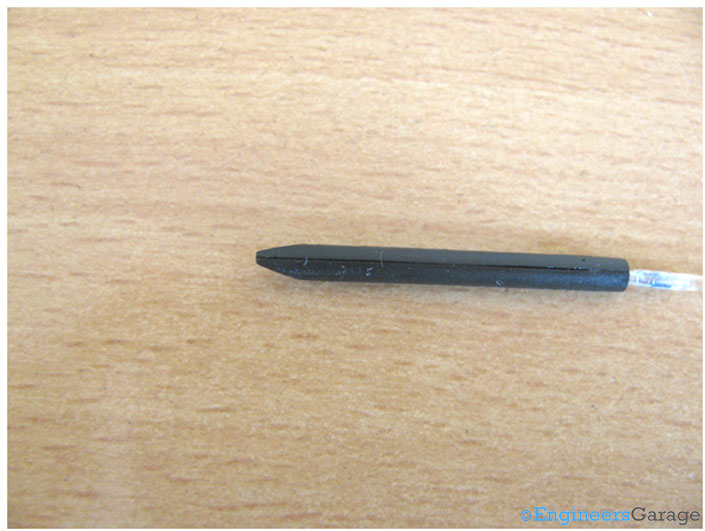 The feed plays a major role in ink refilling by forming a pathway along which ink is made to travel into the cartridge. The ink travels along the incisions that are made along the centre of the feed (shown above). The capillary force along with the gravitational force is responsible for the streamed release of the ink. The incision on the feed reduces the chances of blotting, where ink is released on the paper while writing. The amount of ink released depends on the orientation of the feed and the ink available in the cartridge. Not only does the feed direct the flow of ink towards the nib of the pen, it also acts as a support for the nib. 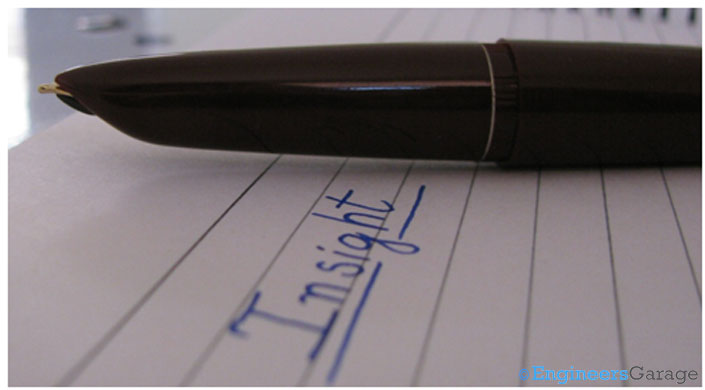 Shown in the image above is the hooded nib of the pen. Fountain pen nibs come in various shapes and sizes. Rigid nibs such as round and oblique are solely for the purpose of handwriting whereas flexible nibs find extensive use in calligraphic purposes. This nib is made of chrome steel.  It has a tiny pointed protrude over its surface that provides fine ink release. 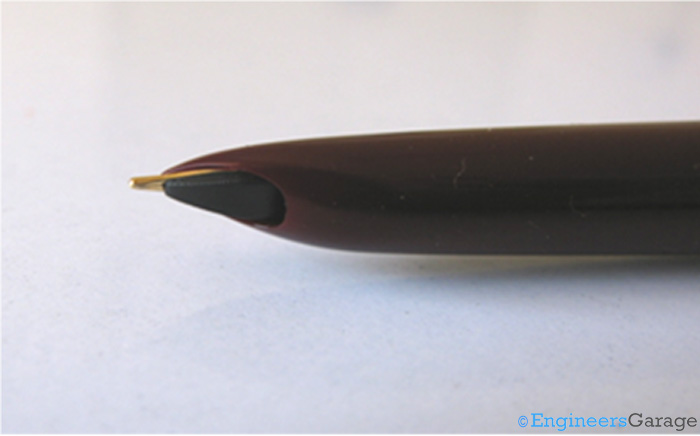 The image above shows how a single drop of ink is ejected from the feed. Controlled release of ink can be seen as it flows through the nib and reaches the terminal as a drop. The ink flows down from the feed to the nib whenever the pen is used. Fountain pens are known to improve handwriting mainly because of their nib and the ink ejection system. The ink release is streamlined with the nib’s friction against the paper resulting in smoother writing as compared to ball pens.  Controlled release of ink from the pen due to the fine crevice along the center line of the feed, the smoothness of the flow and the writing angle together contribute to clear handwritings. 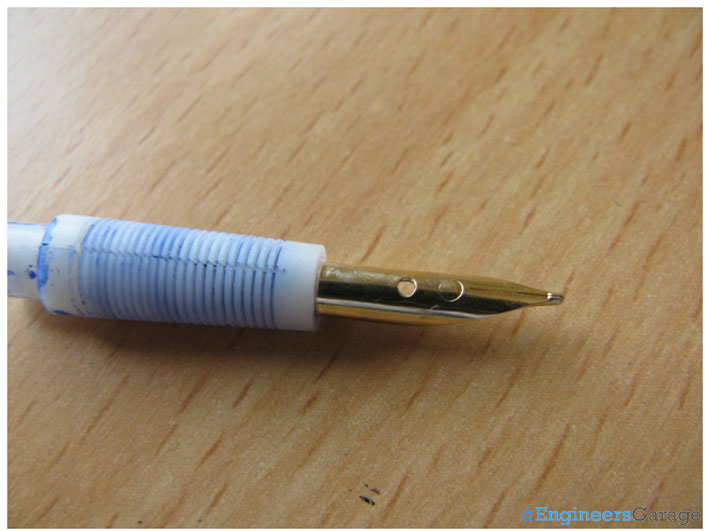 Fig. 9: Inner View of Nib Being Attached To Thread

The nib is attached to a threaded plastic that grips the barrel of the pen. The circular hole on the nib is a vent hole that allows air to fill the ink reservoir of pen when it gets emptied.
Fountain Pens, even though losing their market share to ball point pens and gel pens for day to day use, are still valued by various brands as the best of the writing pleasures one can get. They are still handcrafted in the countries like Japan and will always be used for the diverse calligraphic features they provide
Filed Under: Insight
Tagged With: cartridge, fountain pen, nib, pen