Light emitting diodes aligned in a form of matrix constitute a dot matrix display. It is commonly used to display time, temperature, news updates and many more on digital billboards. Dot Matrix Display is manufactured in various dimensions like 5×7, 8×9, 128×16, 128×32 and 128×64 where the numbers represent LEDs in rows and columns, respectively.

Arrangement of the LEDs in the matrix pattern is made in either of the two ways: row anode-column cathode or row cathode-column anode. In row anode-column cathode pattern, the entire row is anode while all columns serve as cathode and vice-versa pattern is there in row cathode-column anode. LED wafers are glued to the bottom of the segments and glow when powered ON. The interesting part is that 35 LEDs are controlled by using a combination of 14 pins. Conductor tracks are laid all over the board to power each LED. Let’s proceed to know in depth about how a dotmatrix display works. 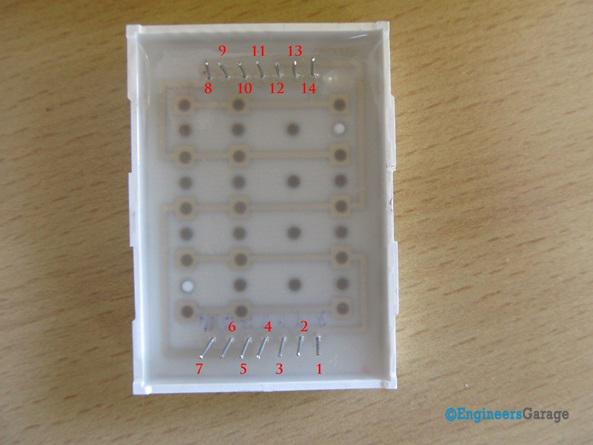 Pin’s Design: Back side of the display shows the in-built tracks and the pins. A total of 14 pins serve as a terminal for 35 LED’s. Numbering of the pins varies depending upon the manufacturer.In this version of dot matrix display, 13, 3, 4, 11, 10 & 6 are the pin terminals for the column and rest for the row. LED Segment:After trimming down the plastic edges the 3-D structure of the LED dots is clearly visible. These dotsare shaped like a funnel andare known as LED segments.LED wafer is fixed at the bottom of the LED segment. When the LED wafer is powered, it emits light. The light passes through the funnel shaped segment which acts as a diffuser and glows the dot.All the LED segments are fitted on a frame with the help of plastic molding. It is the tough plastic molding that keeps dot matrix display unaffected from dust, moisture etc. and hence acts as a protective sheath. LED Wafer:Small golden shiny material shown in  image 04 is the LED wafer. It is a miniature LED and is difficult to be identified with naked eyes. LED Terminals: LED terminals are visible on removing the segments. This terminal powers the LEDs. Slicing:The device is sliced into two halves after taking out all the LED segments from their respective places. These two halves have a mechanical locking which keeps the assembly intact. Bottom panel: After cutting the device into two halves, full view of the bottom panel with all the LED terminals is visible. LED segment housing all the 35 LED terminals are shown in image 07. Additionally, two holes which help in mechanical locking are also dug in the panel (marked inside the red colored rectangles) Upper panel: The Upper panel tightly holds the LED segments.LED segments are placed in these holes, thus forming a matrix display pattern. These holes with the LED segment fit inside the curves carved on the bottom panel. Plastic Fasteners on the upper panel are encircled in image 08. Conductor Tracks: Tracks connecting the LED to their respective terminals are shown in above 09. It is through these internally conducting tracks that LEDs are connected to each other. The rows and columns of the LEDs are also visible, respectively.While excavating the device, the tracks got damaged and hence some tracks are not visible in the image.