MCBs or Miniature Circuit Breakers are electromechanical devices which protect an electrical circuit from an overcurrent. The overcurrent, in an electrical circuit, may result from short circuit, overload or faulty design. An MCB is a better alternative to a Fuse since it does not require replacement once an overload is detected. Unlike fuse, an MCB can be easily reset and thus offers improved operational safety and greater convenience without incurring large operating cost.

The principal of operation is simple. An MCB functions by interrupting the continuity of electrical flow through the circuit once a fault is detected. In simple terms MCB is a switch which automatically turns off when the current flowing through it passes the maximum allowable limit. Generally MCB are designed to protect against over current and over temperature faults (over heating).
There are two contacts one is fixed and the other moveable. When the current exceeds the predefined limit a solenoid forces the moveable contact to open (i.e., disconnect from the fixed contact) and the MCB turns off thereby stopping the current to flow in the circuit. In order to restart the flow of current the MCB is manually turned on. This mechanism is used to protect from the faults arising due to over current or over load.
To protect against fault arising due to over heating or increase in temperature a bi-metallic strip is used. MCBs are generally designed to trip within 2.5 millisecond when an over current fault arises. In case of temperature rise or over heating it may take 2 seconds to 2 minutes for the MCB to trip.
This article covers the insight of a single pole MCB commonly used in the house hold. The following image shows the different internal parts of an MCB with top casing removed. The subsequent sections will examine each part and its function.

The following image illustrates the tripping mechanism of the MCB. The circuit breaker contacts and the position of the knob can easily be seen in both, ON and OFF, state. In the ON state the moveable contact touches the fixed contact as shown in the image.

Connections of the coil

The following images clearly show the connection of the endpoints of the coil with the other parts of the circuit and how the current enters and exits the coil. The switching or the tripping mechanism can be closely observed in the following images. This mechanism is used to automatically cut off the supply of the current when the current exceeds the permissible limits thereby preventing any damage to the appliances.

Fig. 6: Switching Mechanism or Tripping Mechanism
Let us understand this system in further detail. The image below shows a closure look of the different parts of the tripping mechanism. The moving part of the solenoid is called the plunger. It is like a solid semi cylinder connected to a hammer at one end. The moveable contact is positioned slightly above the plunger and moves axially along the plunger. It does not touch the plunger. 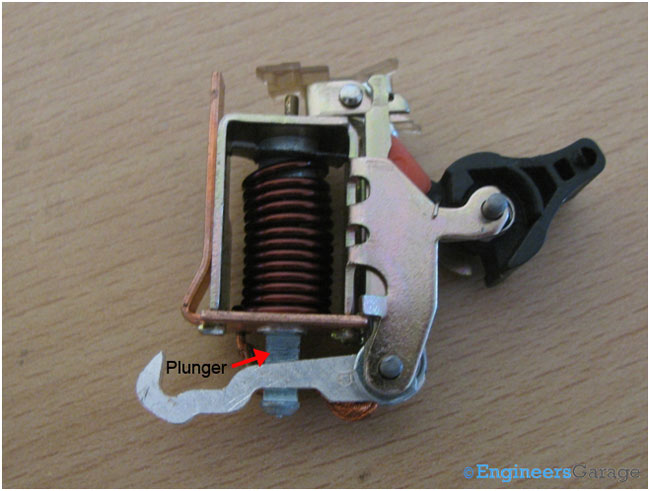 The heart of this mechanism is the solenoid which works on the principle of electro mechanism. As mentioned earlier one end of the coil is connected to the moveable contact by means of a thick wire for current to pass through it in the ON state. The coil of the solenoid is designed in such a way that when current passing through it is within the permissible value, the magnetic force produced is not enough to pull the plunger. When the current exceeds the permissible value, the magnetic force also increases and this magnetic force pulls the plunger inside towards the center of the coil.

On further disassembling, different parts of this mechanical system can be seen. The images below shows all the parts of the switching mechanism which are further detailed in the subsequent images.

Fig. 10: Dissambled view of Parts of Switching Mechanism
The following image shows the connection of the moveable contact with the coil. A thick wire carries the current from the movable contact to the coil. 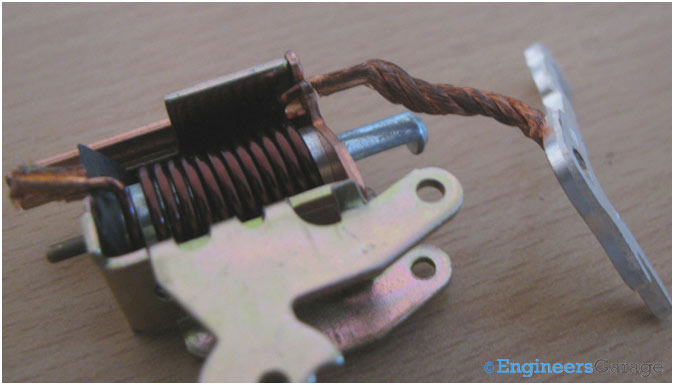 The image shows how the spring loaded mechanism works. The spring which is connected to the rod of the plunger pushes the plunger back to its rest position once the tripping has taken place. 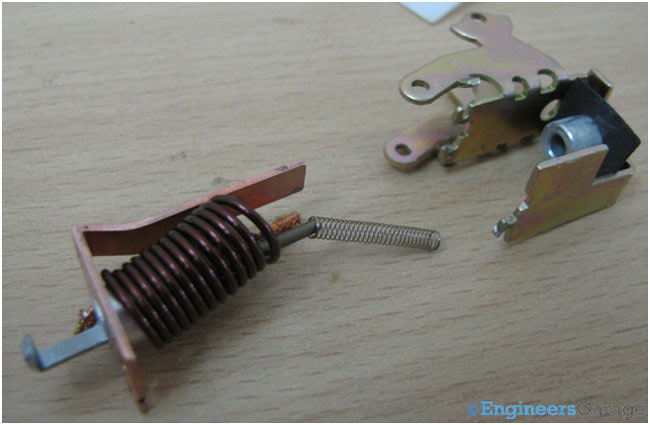 The image below shows the structure and arrangement of plunger, the moveable contact and the spring. 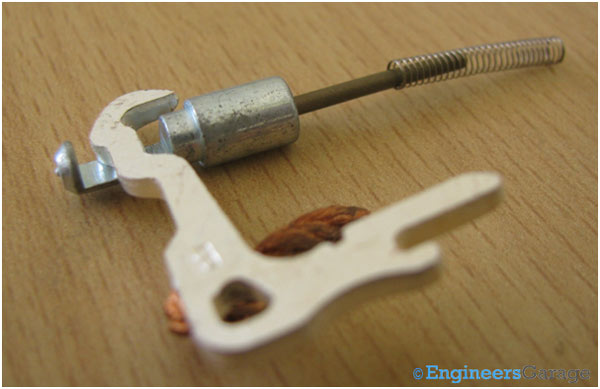 Fig. 13: Structure and Arrangement of Plunger, Moveable Contact, and Spring

The dismantled mechanical parts used to pull the knob when the tripping takes place. When the MCB gets tripped the moveable contact which is connected to the knob using these mechanical parts pulls the knob to the off position. 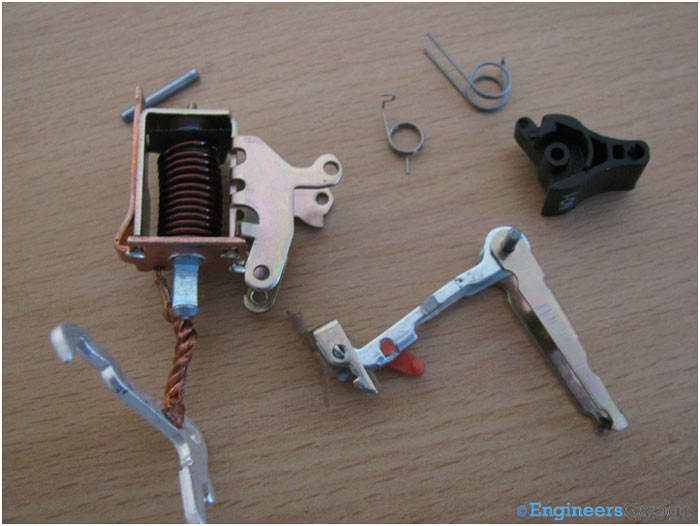 Fig. 14: Dismantled parts of PCB
The following image shows the arrangement of the plunger, coil and the spring. The outgoing and incoming terminals have been shown in the following image. 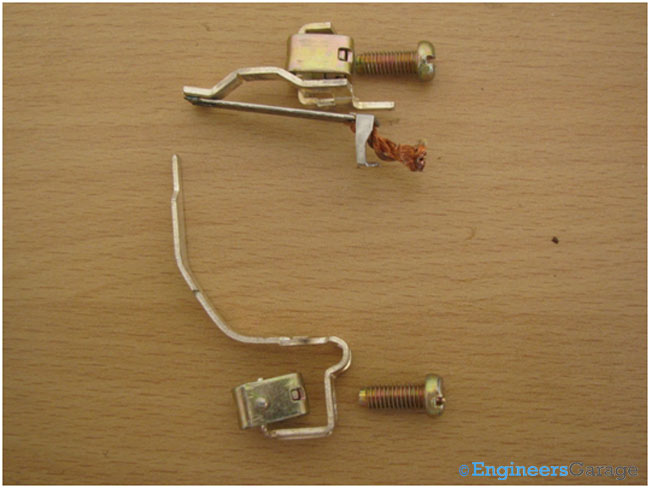 Fig. 16: Outgoing and Incoming Terminals
All the parts of this single pole MCB have been shown together in the following image. 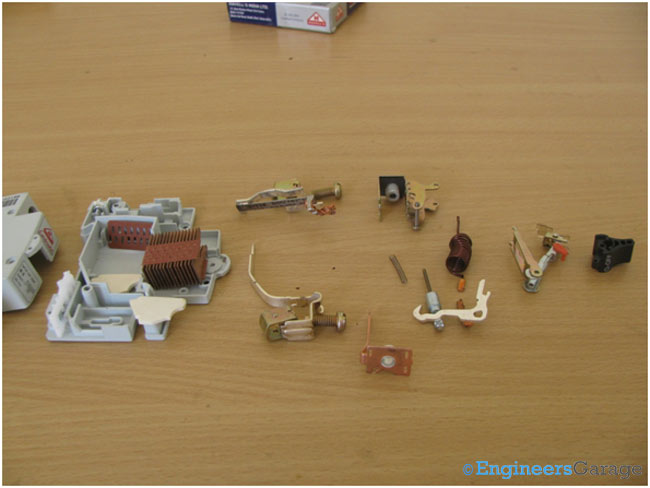 Arc quenching in MCB (Miniature Circuit Breakers)
Another important point to be considered in the design of circuit breakers is Arc quenching. To understand how MCB carries out the arc quenching, it is important to know about the electric arc and how is it produced. When an overcurrent is interrupted by the circuit breaker by opening its contacts, current tries to bridge the gap. In an attempt to maintain the circuit, the air heats up and becomes a conductor. As a result an arc forms. In general, when air and gases are heated, they become electric conductors. The hotter they get, the better they conduct. The following image shows how an electric arc looks like. 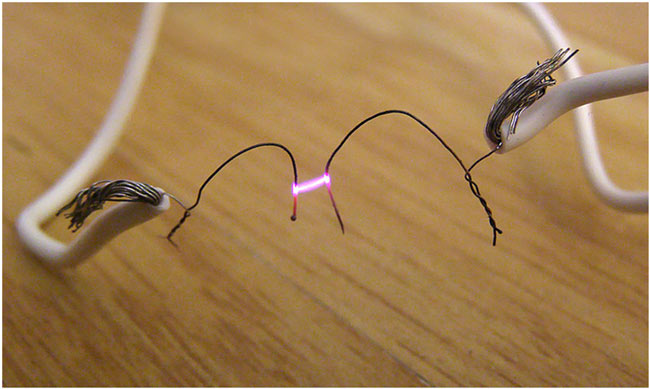 Fig. 18: Image of Electric Arc
The heat from an uncontrolled arc in a circuit breaker can cause a rapid and violent expansion of the nearby air and could severely damage the circuit breaker. Therefore, besides separating the electrical contacts, a circuit breaker also has to quickly extinguish the arc. A number of factors can be employed for quenching the arc, such as, speed, distance, dielectric strength, cooling etc.
a)      Speed : When the contacts separate rapidly, there is less time for the arc to form and maintain itself.
b)      Distance : When the distance between opened contacts is more, the arc has to stretch more to maintain the current flow which requires more voltage.
c)      Cooling : When the arc is forced against a cold material, it absorbs and dissipates the heat.
d)     Dielectric Strength : When the arc is submerged in a medium with higher dielectric strength than air (sulfur hexafluoride, SF6), the insulating nature of the medium helps in quenching the arc.
In an MCB, arc chutes or arc dividers are used for arc quenching. When the contacts of an MCB separate, generating an electrical arc between them through air, the arc is moved into the arch chute where it is divided into small segments. The overall energy level of the arc gets split up which is not sufficient to sustain the arc and therefore it gets dissipated. 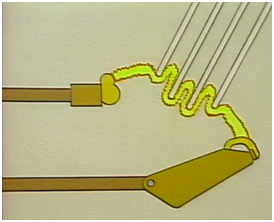 The image below shows the arc chute used in the MCB for arc quenching purposes.

Finally the next images shows how the arc chute is positioned in the MCB. The fixed contact is extended to the arc chute. This is done so as to transfer the arc to the interior of the breaker. The arc is broken into smaller arc by the arc chute. These segmented smaller arc have a very small potential and hence get naturally dissipated.

On removing the holder which holds the arc chute, the mechanical structure and arrangement of the arc chute is visible in the next image. 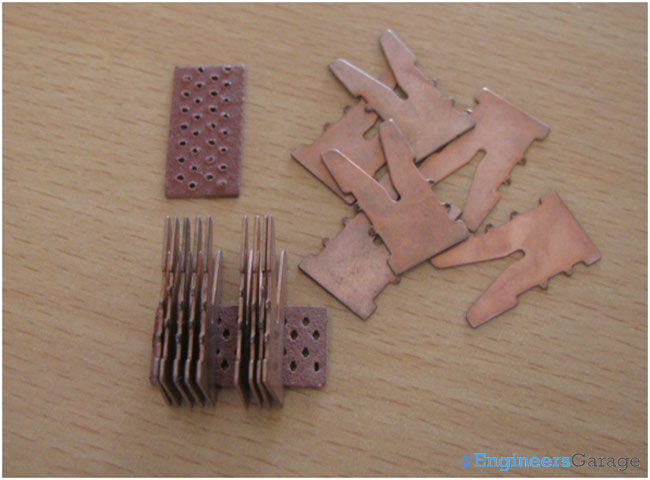 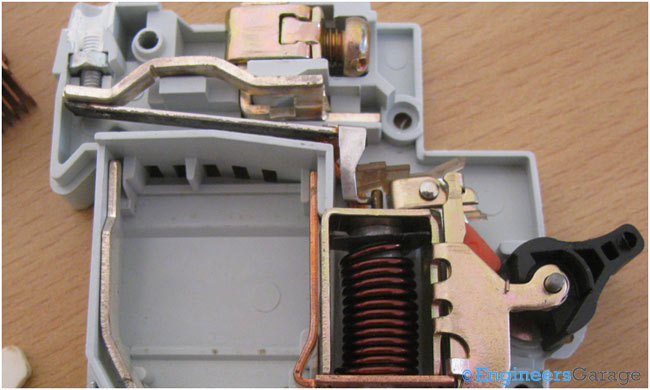