Continue to Site
With every possession comes a natural urge to protect it with all the might, protect it with every possible barrier that he could invent. One of the last bulwarks to this line of security has been the simple yet efficient, padlock. Padlocks were one of the very first mechanical inventions that were designed to protect the assets and houses. A very high degree of key specificity makes the chances of having one key working with more than one lock highly unlikely. In order to use it, there is no complicated mechanism unlike setting a password of 6 characters or more and then always remembering them, but a simple key. All one has to do is to insert appropriate key to engage or release the lock. Simple enough? But is it really that simple from the inside? Let’s find out. Why every lock does have its own unique key? 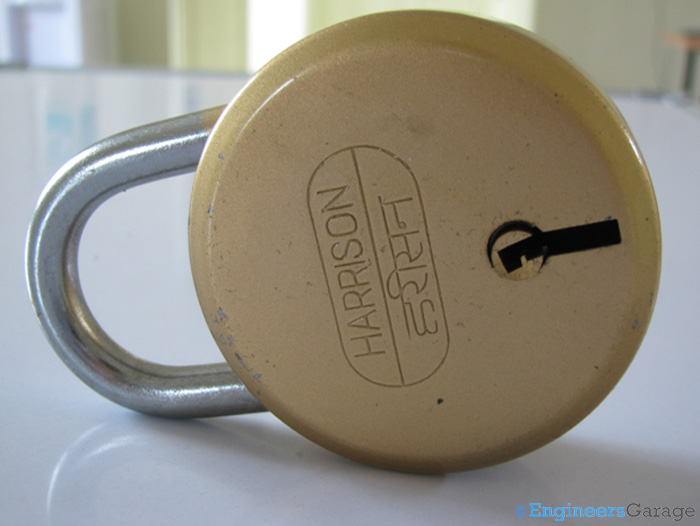 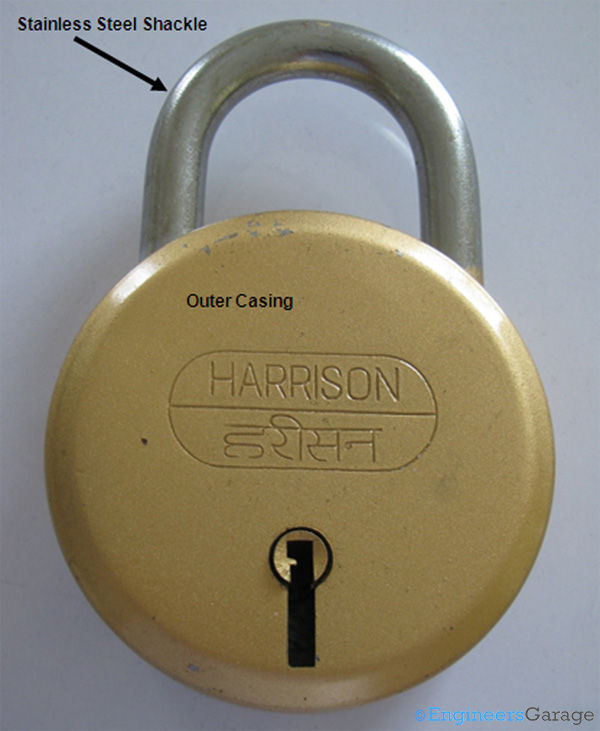 Fig. 2: Image Indicating Outer Parts of Lock—Stainless Steel Shackle and Outer Metal Casing
The image above shows a 7 lever mechanical lock.  In lever locks, there are two metal casings. The first casing is the one visible to the user. Made from cast iron, the outer casing can handle a lot of tampering and mechanical abrasion before letting the trespasser disturb the internal working of the lock and break it. It also gives the outer appeal to the locks. It may further be enameled using a thick chromium layer or copper. The outer casings can also be made using stainless steel or brasses which do not require any extra coat as they are already corrosion resistant.
The outer casing can either be a combination of front and back parts firmly joined to each other or can be a single mould enclosing the internal casing. The one taken here is the former design with the image below showing the internal casing when back casing of the lock is removed. A stainless steel shackle is used to engage and release the lock. The shackle has to be tough to cutting tools in order to ensure security of the lock and everything it is guarding. 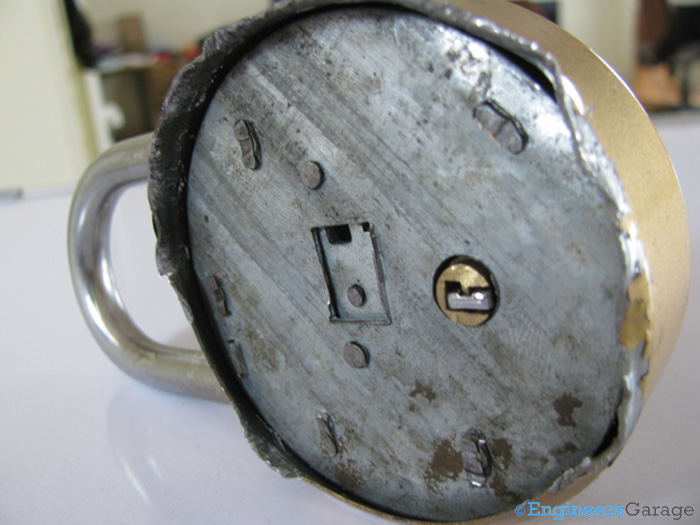 Fig. 3: Image Showing Internal Casing of 7-Lever Lock
The internal casing is placed immediately inside the top one with minimal gap between them. When placed close, there is no extra space taken to accommodate internal casing and moving the internal casing within the confines of the outer shell is very difficult. 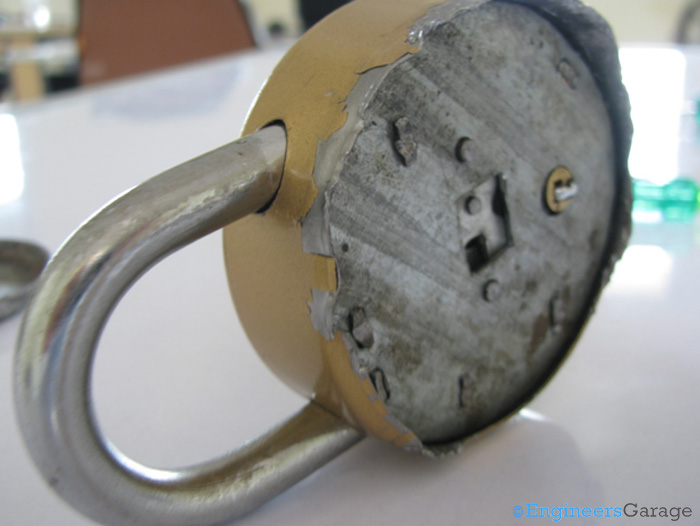 Fig. 5: Area Where top Casing is Cut to Expose the Internal Casing
After the area near the shackle is cut down, the top casing can be removed and internal casing of the lock is exposed. 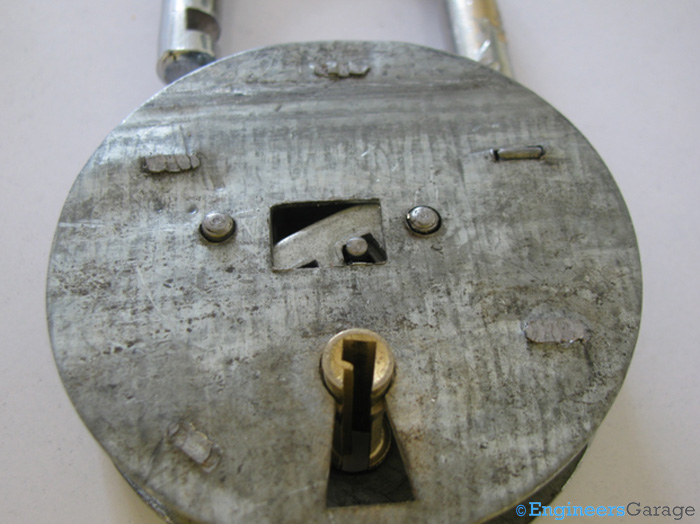 Fig. 6: A view of Internal Casing Housing the Lever System
It is also made from iron and is similar in terms of thickness and strength.  It houses the lever system of the lock which is tightly placed inside. Once open, the lever system loosens and the lock loses its value. It also becomes a difficult to arrange back the levers in the same manner as before.
The various pictorial views of the lever alignment inside the internal casing can be seen in the image below: 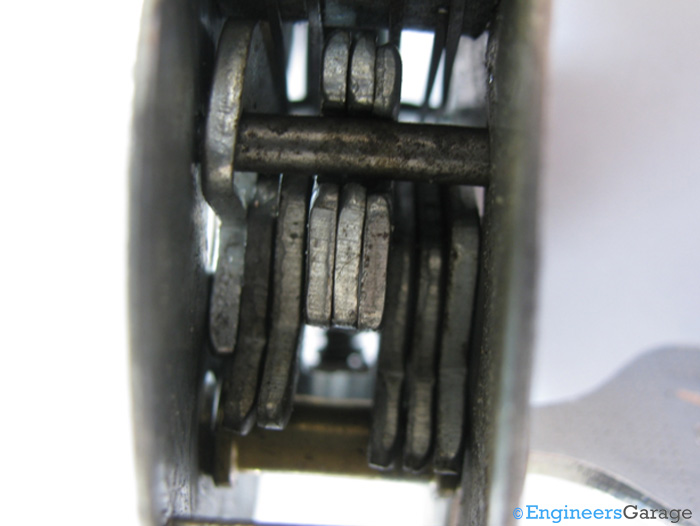 Fig. 7: Image of Lever Assembly of 7-Lever Lock
Sandwiched between the two iron sheets of the inner casing is the lever assembly. The alignment of levers during key insertion and their movement is the most crucial factor of locksmithing a mechanical lock. 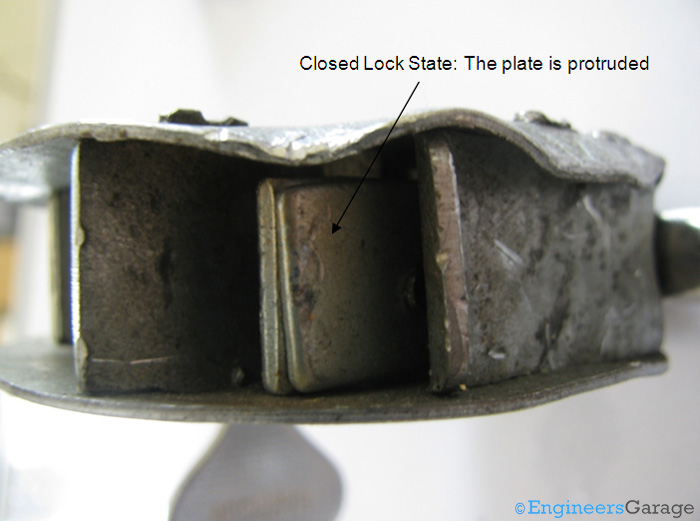 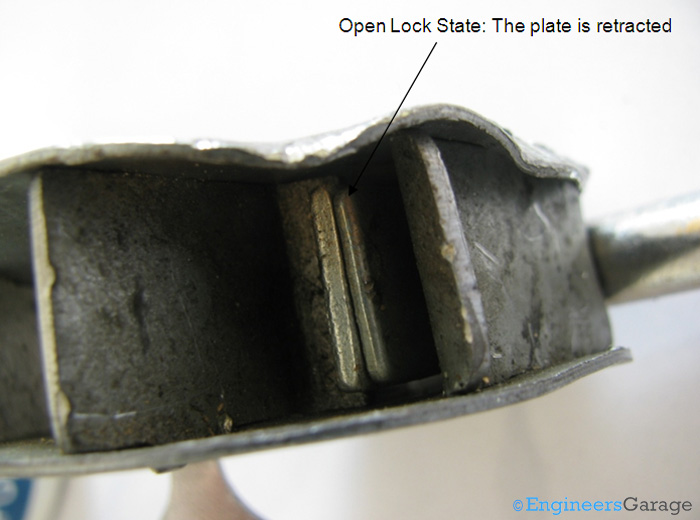 Fig. 9: Image of Open-Lock State
The images above show the projections that come of an object called the Ã¢â‚¬Å“hudkaÃ¢â‚¬ (latch) of the lock in local dialect. This latch is responsible for holding the shackle to the lock when it is being engaged. The shackle has a notch in it where this latch inserts itself to prevent further movement of the shackle. 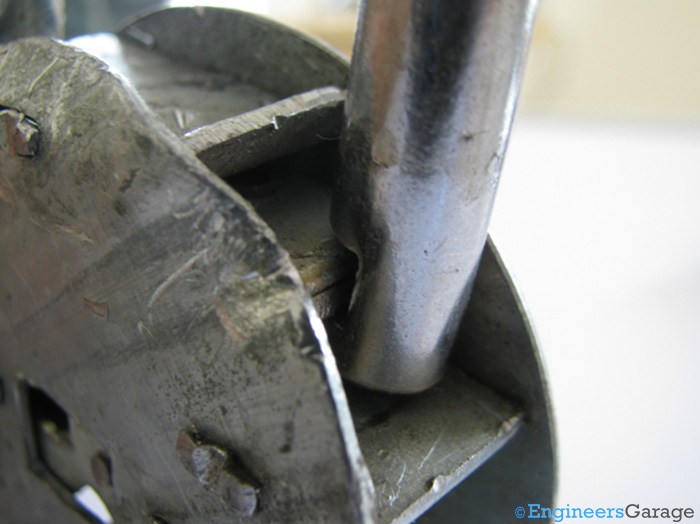 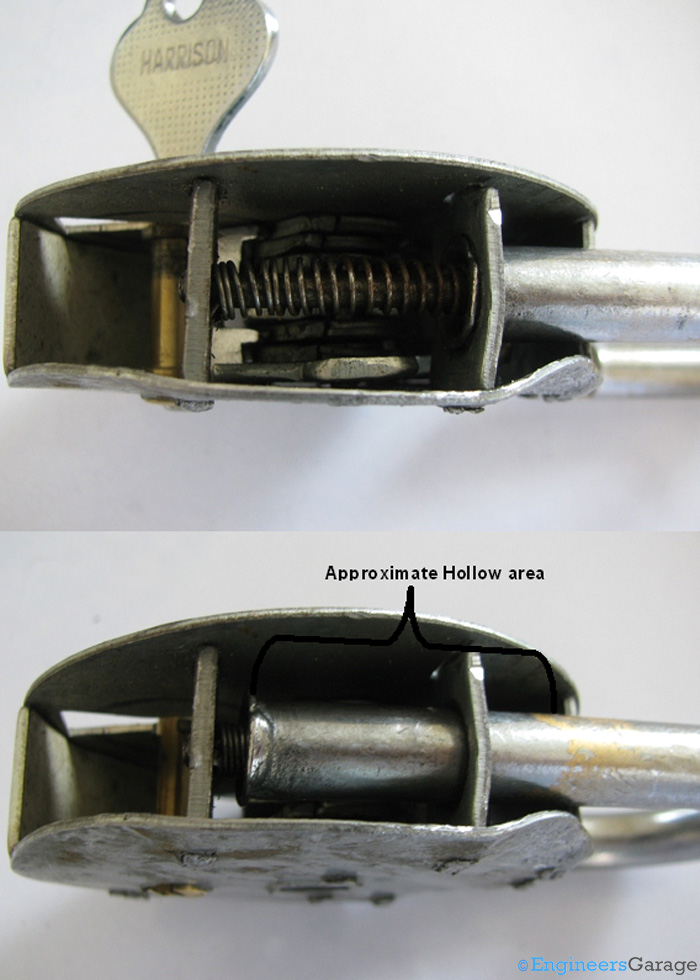 Fig. 11: Shackle–Spring Mechanism of Lock
The shackle is made from stainless steel and it is slightly hollow from the part which is fixed inside the internal lock assembly.  In the hollow part, a spring is inserted that helps in pressing the shackle down to engage the lock and pushing it back when the lock is released. The spring is mounted over a thin cylinder which is placed on a platform. The images above depict the shackle in unlocked and locked positions respectively. In the unlocked position, the spring is in a relaxed state and there is no force acting over it. In order to engage the lock, the shackle is pressed down which compresses the spring. The latch extends as the key is turned and the shackle is locked while the spring remains compressed.
When the key is rotated to release the lock, the latch distances itself from the shackle and spring decompresses itself letting the shackle return to its resting state. The lower end of the shackle is flared out so that it does not detach itself from the lock structure on release.
This is all about the construction of a basic lock mechanism. But, there have to be certain preventive measures so that the lock is not released with just any key. That is where the 7 lever mechanism comes into picture. 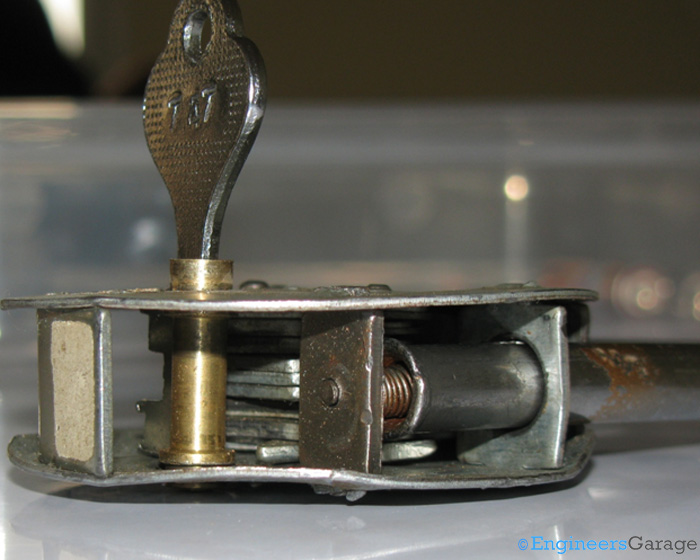 Fig. 12: Image Showing How the Lock Process Works when Key is used
The image above depicts the process of the shackle and the spring being pressed meaning that the shackle is locked to the levers. The orientation of levers can be seen when the process is taking place. The levers are aligned differently in each lock and the differences in their alignment causes differences in the unlocking pattern hence making each key and lock combination unique. 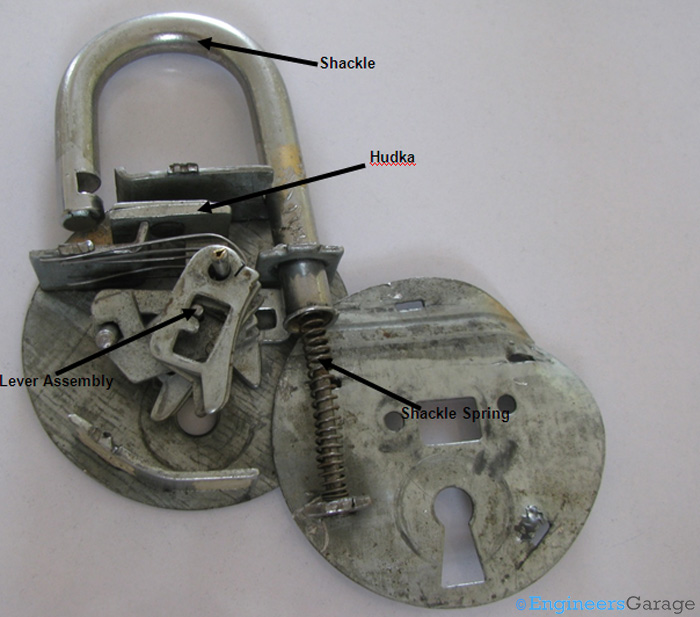 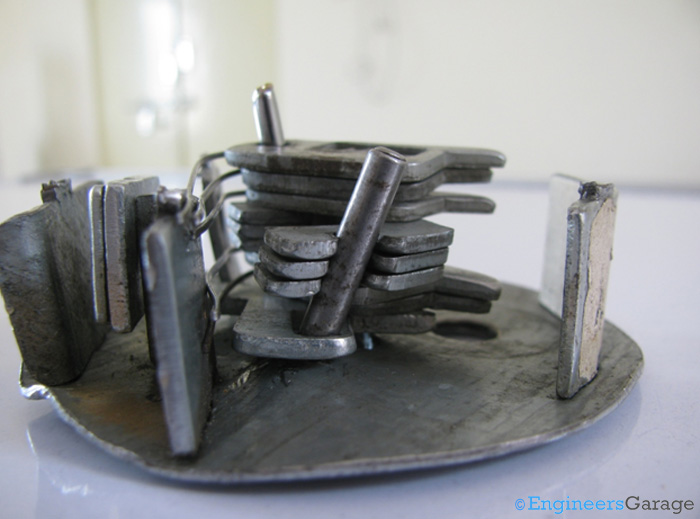 Fig. 14: Lever Assembly Arrangement
When the internal casing is opened, the assembly of the lock goes loose as the projections holding the levers have no other end to hold upon.  The image above displays the unique manner in which the levers of the lock are placed over each other.
To mount the lever assembly, the lower part of the inner assembly has three support rods over which lever assembly is mounted through its notches and cut sections.
Lever Assembly: Lever
The lever assembly comprises of two different structures: levers and the plates inserted to reduce the frictional force between the levers. These two combine to form the system of deciding the code of the lock. A total of 5 levers (along with 3 support plates making a total of 7) are there in the lock taken here but there can be more, less or no levers in a lock depending on the manufacturer and the type of lock bought. 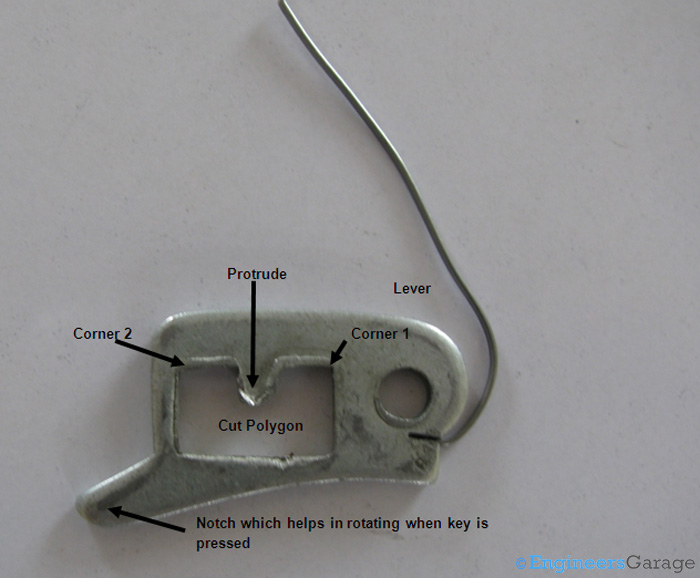 Fig. 15: Lever Design
The lever has been designed to fit in the little space of the internal lock casing as well to provide a robust mechanism for the lock. It has a flexible wire which is placed under a small roof like support built inside the inner casing of the lock. The wires act like a spring, providing a bit restraining force when key is inserted and rotated. This makes sure to the user that he has inserted the proper key or not. When a wrong key is inserted, the lever combination does not match and the wires keep on restraining the force exerted by the user.  A combination of levers is present which the key has to pass in order to reach the hudka that in turn either sets the shackle free or locks it. When the correct key is inserted, the lever takes the help of the spring to move itself to give way to the key moving the Ã¢â‚¬Å“HudkaÃ¢â‚¬ (Latch).
Whenever the key is inserted inside the lock, it has to match the pattern of the notch placement in the lever assembly in a single go. When the key matches the pattern, the levers move with the help of the spring and change their orientation. This change is helped by a small polygon that is cut in the middle of the lever. In the locked position, the cylindrical rod of the lower casing rests at corner 1 of the polygon. When opened, the lever moves and polygon cut moves far from the rod. It is then held by a small protrude inside the polygon.
The process of unlocking is complete when the key is able to rotate the hudka along with lever, thus releasing the shackle.  The irregular shape of the lever assembly forms a pin tumbler lock mechanism. In this mechanism, the key has several cuts so that it can match the various alignments of the levers .It gives the notches a different angle and length to be approached by the key.
A fine gully is etched in the key to guide the key into its proper orientation. 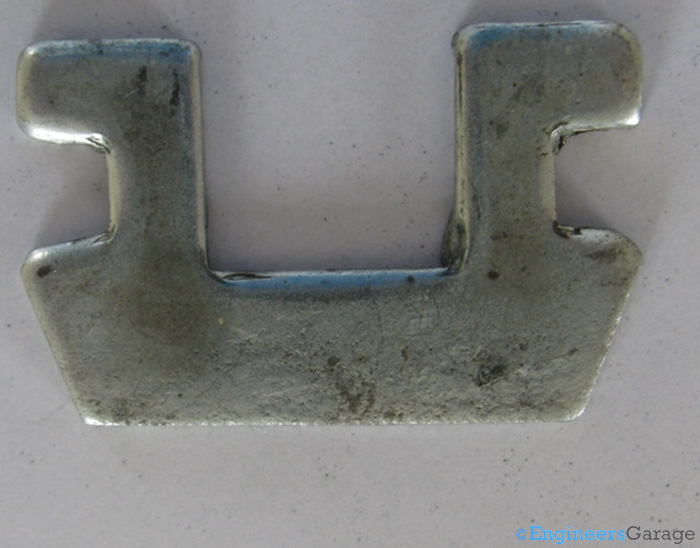 Fig. 16: Inverted Pie Plate of Lever
The inverted pie shaped figure in the image above is a plate that reduces the wear and tear among the levers. The placement of the plates is not fixed and is jumbled with the levers so that a unique combination can be generated. For instance, ideally in this lock these plates should have been placed alternatively to reduce the friction between the levers. But they were unevenly placed between levers. Now won’t it cause more wear and tear to the lever? It would! To reduce that, one side of the lever is made very smooth and is placed next to the other levers less smooth side. This significantly reduces the friction between the levers. 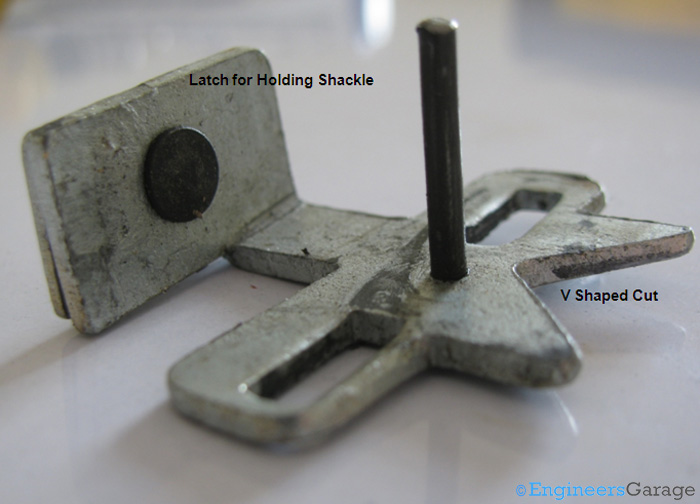 Fig. 17: Latch for Holding Shackle
The part shown is called a Ã¢â‚¬Å“HudkaÃ¢â‚¬ and it is responsible for holding and releasing the shackle. It is the last part that the key needs to rotate after it matches the pattern of the levers on its way inside. The upper part which connects to the shackle is the latch while the rest of the body supports the levers that are mounted over a small rod erected at the centre. Two rectangular cuts are there through which two similar rods pass and mount the levers on them. A Ã¢â‚¬Å“VÃ¢â‚¬ shaped cut is on the bottom of hudka which aids in rotating it when the key reaches it. 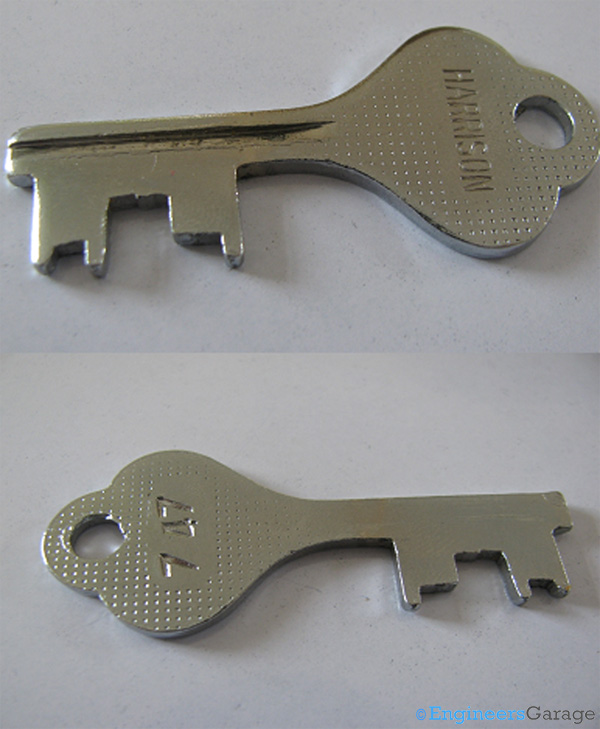 Fig. 18: Image of Key
Images above describe the mighty lock opener, the key. Just as the lever and plate placement is essential in determining the lock combination, on the same grounds, uniqueness of the key is very critical for the lock. The number of cuts on the key signifies the number of levers and their placement making every key unique. 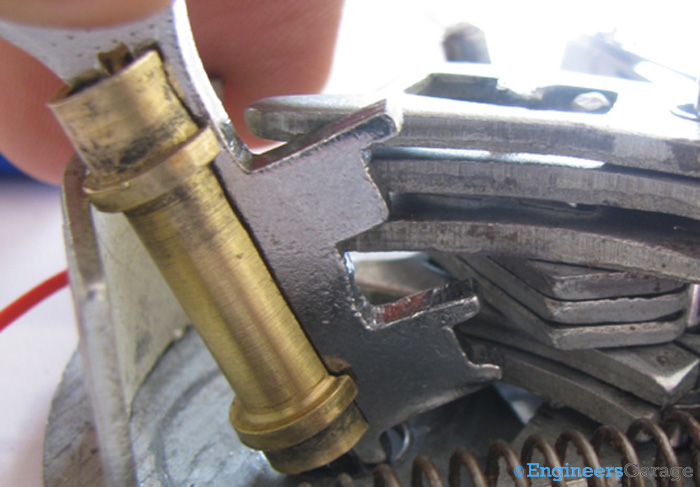 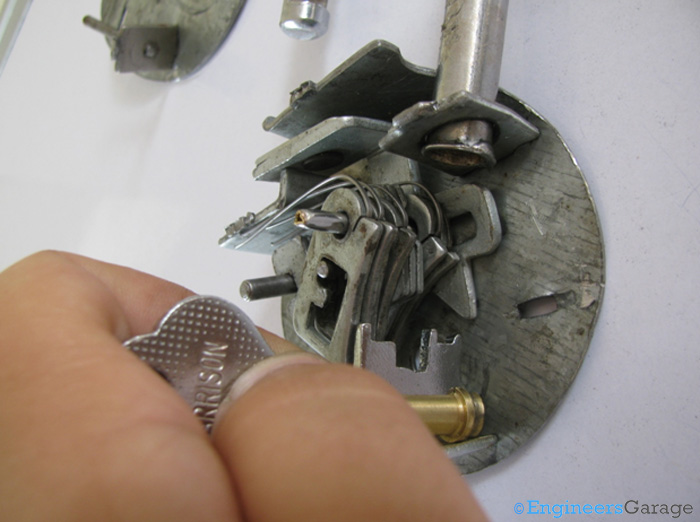 Fig. 20: Image Showing the Working of Lock When Key is Inserted
Image above describes the manner in which the key moves synchronizing with the levers whenever the lock is to be opened or closed. The pattern on the key should precisely complement the pattern of the lever assembly in order to open it or the whole process would yield no result and the lock will remain intact in its position. The key has to match the code of lever assembly and reach the hudka which engages or releases the lock relative to the position of the shackle.
Padlocks are one of the oldest palm-sized security guards which never seem to go obsolete. Modern customizations and digital locking have evolved and are much more trusted, but padlocks still remain as the common manÃ¢â‚¬â„¢s best approach to protect his luggage and his house at a reasonable pricing. Simple yet tough? Definitely!
Filed Under: Insight
Tagged With: hudka, lever lock, lock, mechanical lever lock