Inside the simple looking switch lies an interesting piece of mechanical engineering. What forces the switch to come back to its original state? Is it because of some magnetic force or does it requires an extra power source?  How the different mechanical components are arranged to make the switch work? 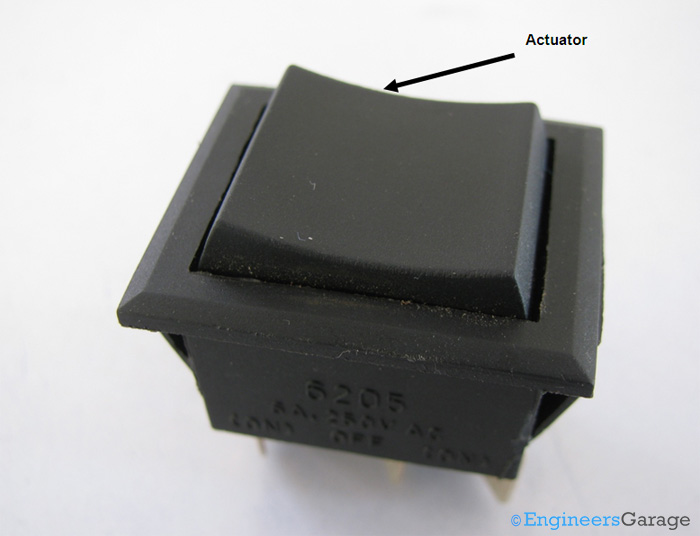 Fig. 1: Image of a Momentary Rocker Switch
Shown in the image above is a conventional momentary rocker switch. This is a normally open (NO) switch and conducts when its actuator is pressed in either direction. The outer structure is made from thick polymer material and it provides sturdiness to the switch. 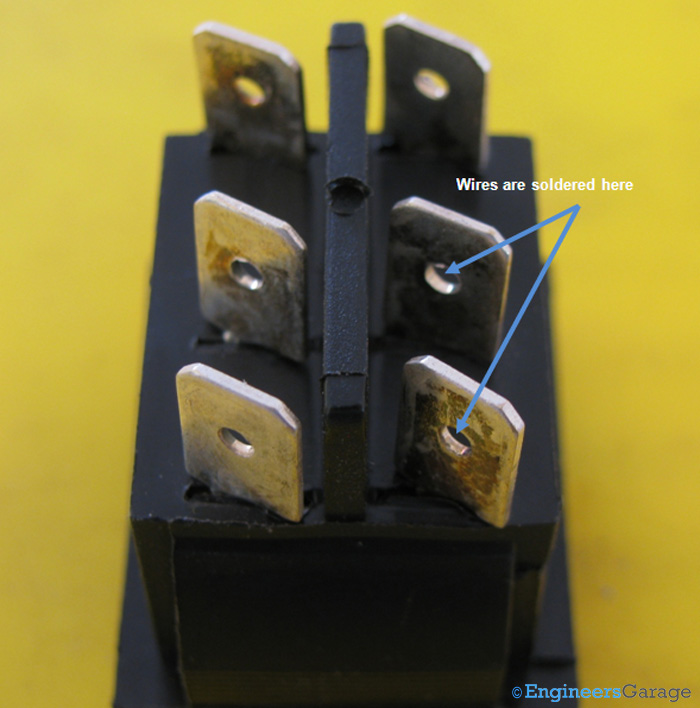 Fig. 2: Embedded Six Legs in Epoxy of Outer Casing
The bottom of this switch has 6 contacts/legs embedded in the epoxy of the outer casing. The pins are arranged in a pair of 2, thus making 3 pairs which denote the ON, OFF and ON position of the switch.  The contacts have circular cut sections from where wires can be connected or soldered to the switch.
The switch taken in this insight has the default state at the center and the other states at either direction. In this switch, default state is normally open (NO) while other states are normally closed (NC). 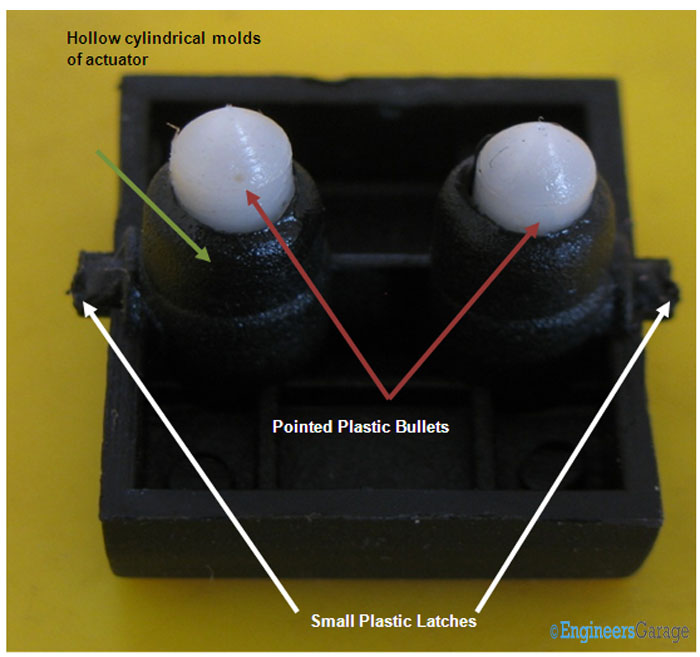 Fig. 3: Image Showing Hollow Cylindrical Molds of Actuator
The upper part of the switch is the actuator which can be removed by pushing small plastic latches as shown in the image.
The reverse side of the actuator has two hollow cylindrical structure which holds the spring and two hollow plastic bullets. 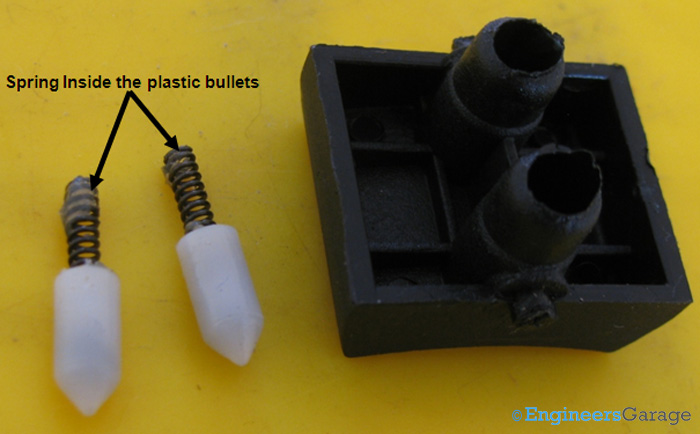 Fig. 4: Image Showing Spring Attached to Bullets
Plastic Bullets : The image above shows the lubricated springs placed inside the plastic contacts. The spring and plastic bullet assembly are responsible for making the connections by pressing the contacts through the spring force thereby making the switch ON and OFF 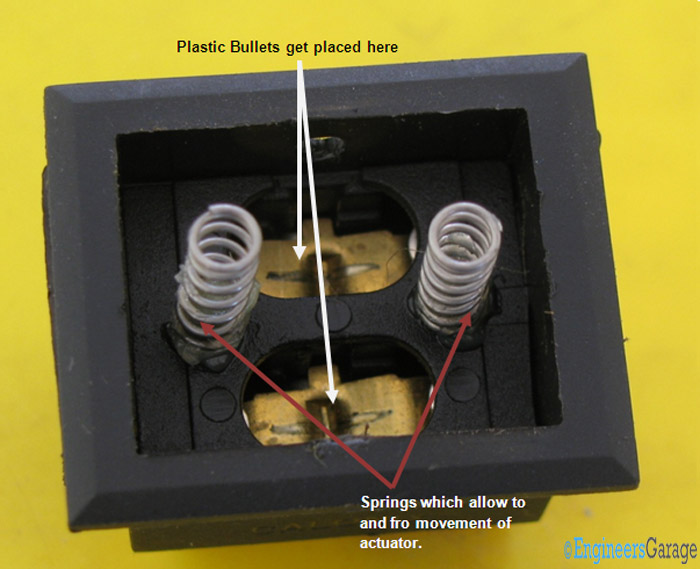 Fig. 5: Internal Mechanical Structure of Switch
The internal mechanical structure of the switch base is shown in the image above.  We can see two additional springs and the metal plates.
The spring located in the base (shown in this image) are responsible for the to and fro motion of the actuator. When the actuator is pushed by the force of a finger in either direction, the corresponding spring compresses and sends the actuator back to its normal state on removing the external force.
The plastic bullet and spring assembly (shown in the earlier image) rests perpendicular to the spring shown in this image. The plastic bullet touches the metal plates in the rest position and exerts a force when the switch is pressed. 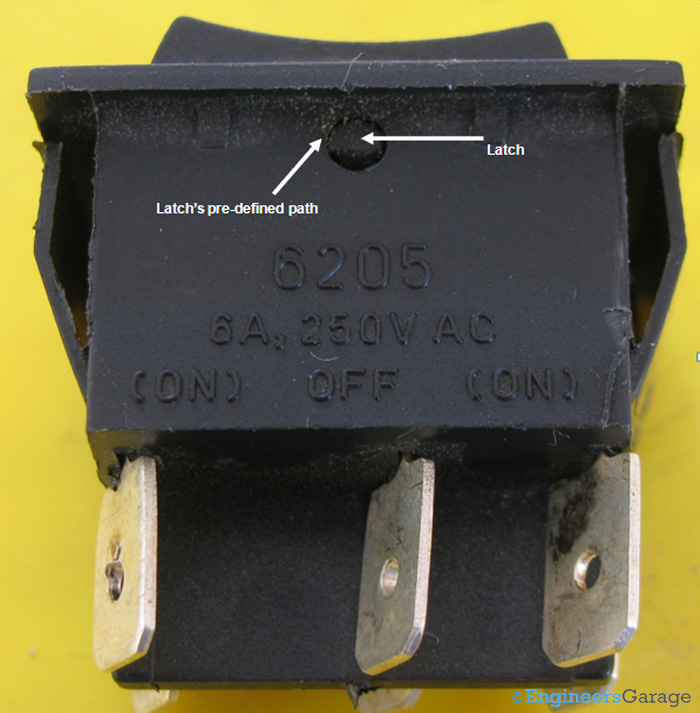 Fig. 6: Image of Latch of Rocker Switch
Latch : The latch is marked in the image above. The actuator moves around the axis of the latch. The latch although a very small part, has its own importance. When the switch is pressed in any direction and released the spring will exert a force on the switch. The actuator will continue to move once the spring has come to rest in accordance with the Newton’s first law of motion i.e. a body in motion will remain in motion until and unless it is compelled by an external force to stop. The latch provides this external force and brings the actuator to its rest position after some oscillations.
Actuator Springs : The actuator rests on the springs present on the base of the switch. It has slots in the interior side as shown in the image below. 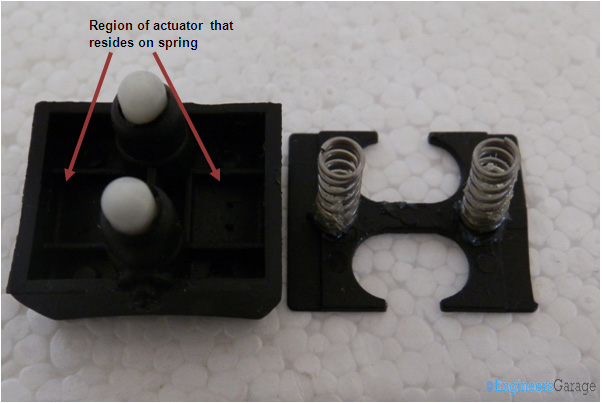 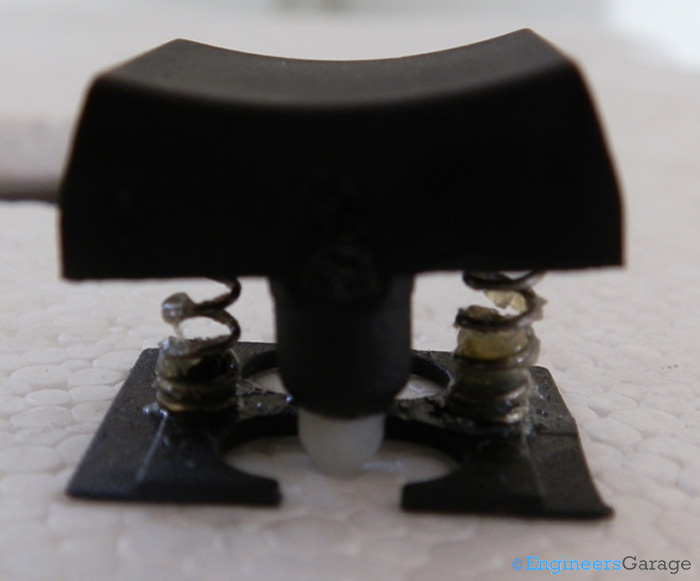 Fig. 8: Springs in the Lower Surface of Actuator
In the image shown above, the placement of the springs in the lower surface of the actuator can be seen. This is the rest position of the switch.
Thoroughly lubricated, the springs are responsible for the to and fro motion. Lubrication prevents the chances of disturbances in the motion of actuator and increases longievity of the switch.

The springs are placed on a plastic plate which has cut sections to allow contacts from actuator to extend and reach the metal plate. 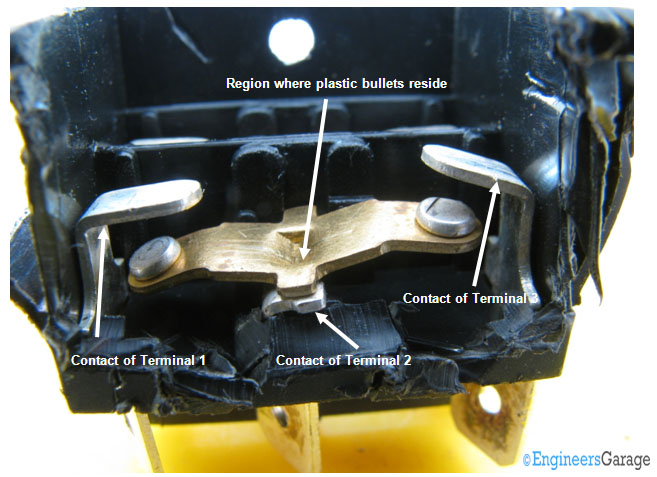 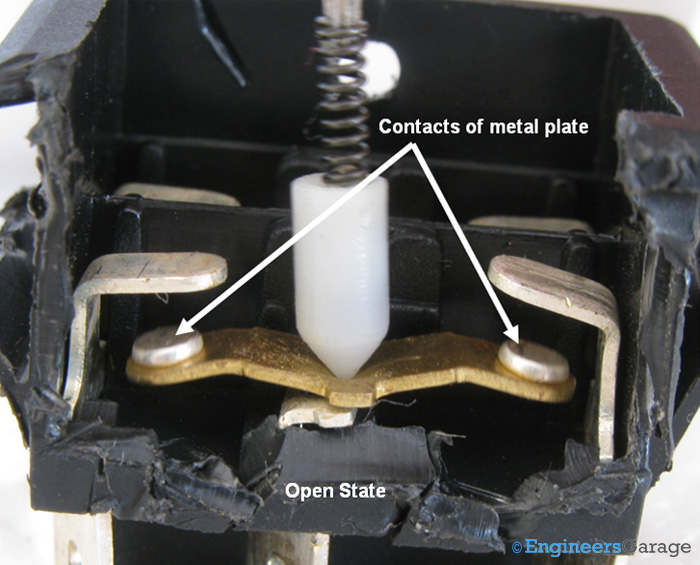 Fig. 10: Switch in Rest State
The image above shows the rest state (NO) of the switch. The plastic bullet rests in the center of the metal plate. The metal plate is always connected to the center terminal which is the common terminal. 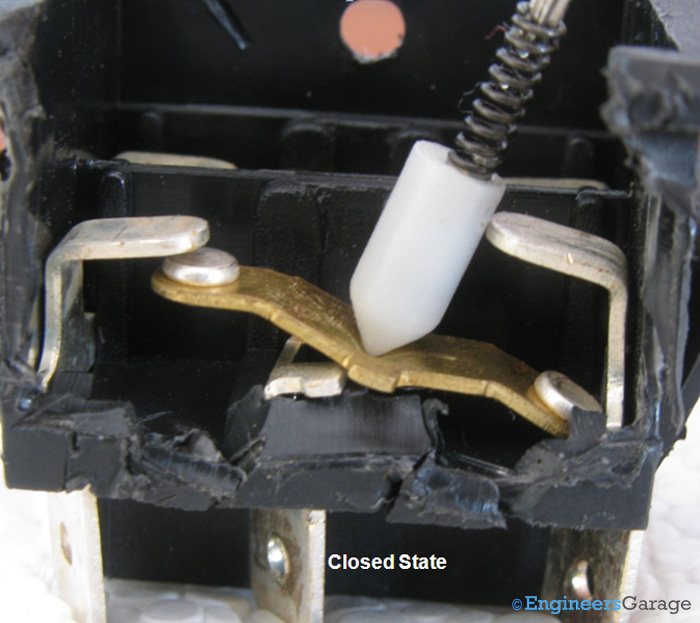 Fig. 11: Mechanical Arrangement when Switch is Pressed
This is what happens when the switch is pressed in any one direction. The metal plate moves and connects the middle terminal with one of the other terminals as shown in the image thereby completing the circuit.
As soon as the external force is removed the plastic bullet assembly restores to its normal state thereby breaking the connection between the terminal and the switch goes OFF. 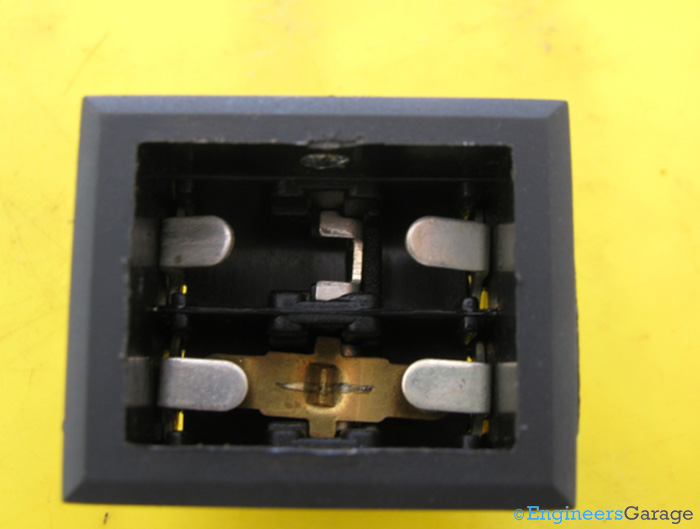 Fig. 12: Placement of Metal Plates and Terminals Inside Base of Switch
The top view showing the  placement of the metal plates and the terminals inside the base of the switch. One metal plate has been removed. 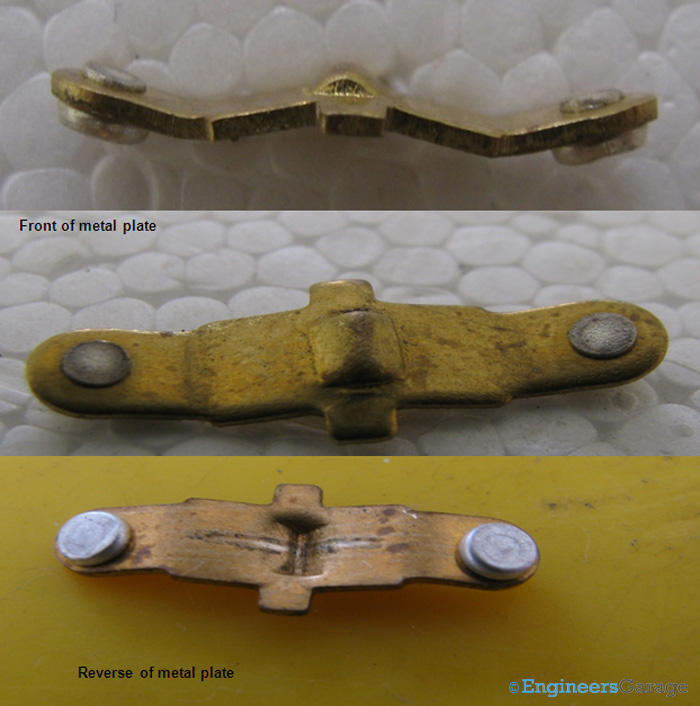 Fig. 13: Image Showing Shape of Metal Plate and its Front and Reverse View
Shape of Metal Plate : The shape of the metal plate is shown in the image above. It is a see-saw type structure with small circular protrusions for contact that emerge on its middle and sides.  A zigzag structure of the metal contact aids in easy movement. When one half of the contact goes up to establish contact, other comes down in such a manner that it is not in contact with the other pin.
The front and reverse part of the metal plates can be seen in the image above. The center of the front part has a small section dug up which causes a bulge on its opposite side.
Filed Under: Insight
Tagged With: actuator, metal plate, momentary rocker switch, switch