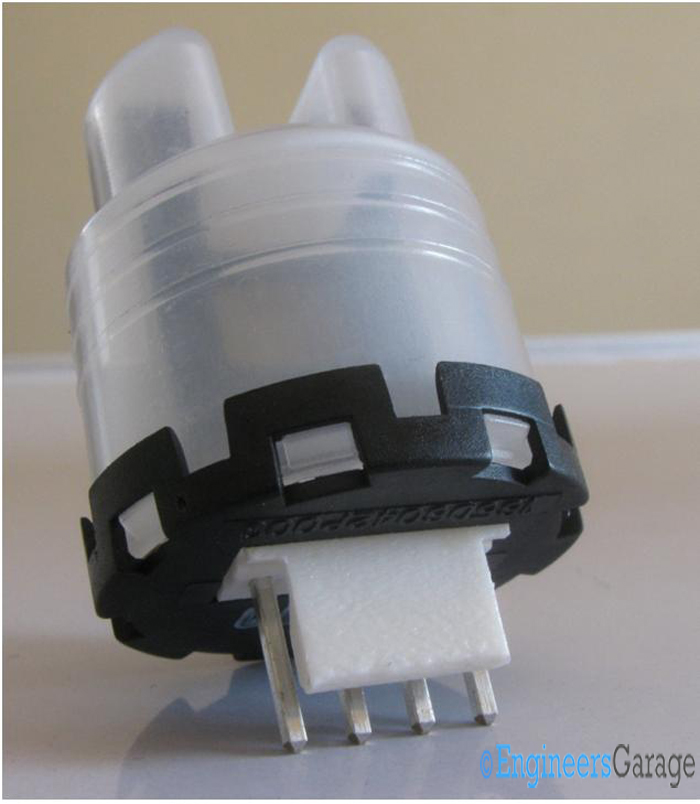 Turbidity is the quantitative measure of suspended particles in a fluid. It can be soil in water or chocolate flakes in your favorite milk shake. While chocolate is something we soo want in our drinks, soil particles are totally undesired. Keeping aside the potable purposes, there are several industrial and household solutions that make use of water in some or other manner – for instance, a car uses water to clean the windshield, a power plant needs it to cool the reactors, washing machines and dish washers depend on water like fish. Now the question arises here: how do these machines get to know about the turbidity? We are blessed with nature’s evolutionary gift of senses to find out soil in the water, but what about your washing machines? No eyes to see, to tongue to taste, no skin to feel but just a plastic body with some buttons and motor inside. How does it so smart to work as per soil suspension?? (If you are wondering does it even do that, the answer is a big yes!)The answer to this is a 4.7 cm gadget: Turbidity Sensor, which along with a micro controller unit, takes care of turbidity measurements. Crafted with plastic and some metal-alloy traces, turbidity sensor uses light to convey information about turbidity in water.

What is the turbidity sensor made of? And how can it use light (which cannot be quantified) for turbidity measurements?  Let’s find out in this Insight of a General Electric’s Turbidity Sensor. Interestingly, this sensor model has an additional feature to sense temperature changes. Let’s find that out too!! 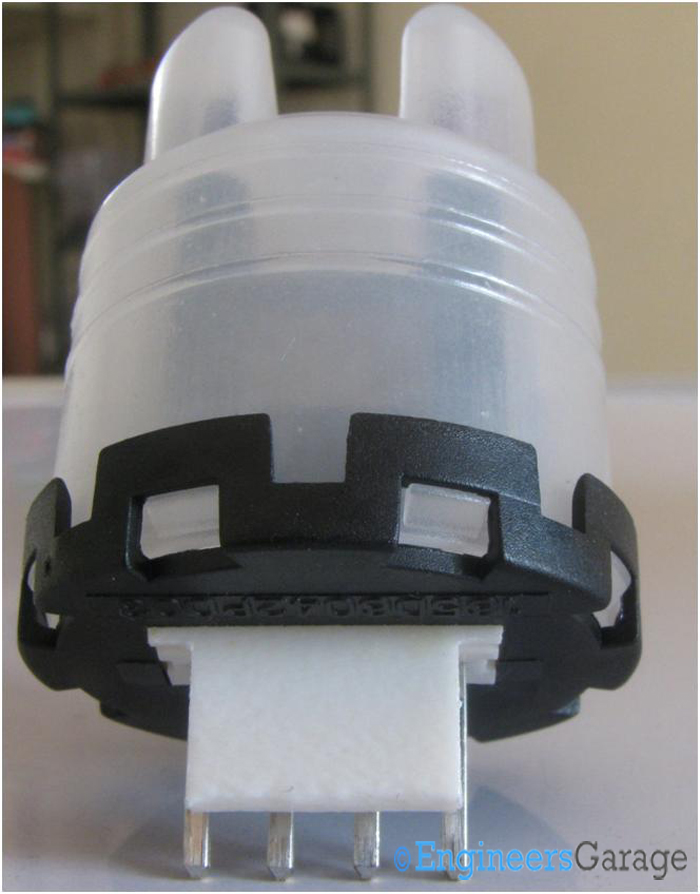 Image 02 gives us a glimpse of the outer structure of a turbidity sensor. When viewed from front, the turbidity sensor appears like an Android bot. Two horn like structure, a top to bottom mono material body. A black colored cap is placed at the bottom of the sensor. Thick alloyed contact legs provide means for various connectors to hold to the sensor. A white plastic slab protects the legs from damage and act as a fixture for good clamping of the sensor. 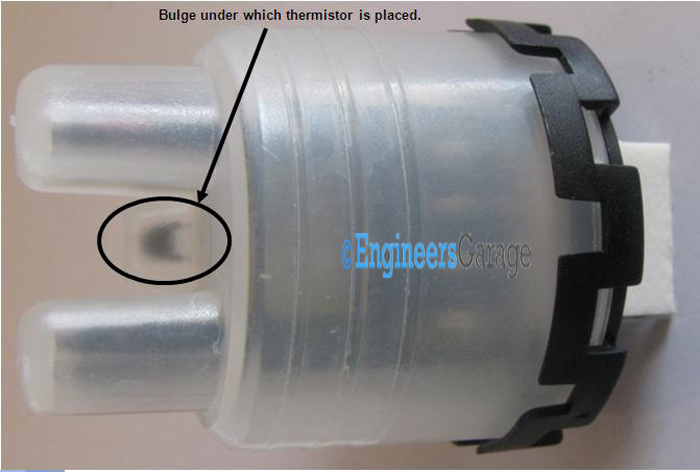 Fig. 3: Shape and parts of Sensor from Lateral View

Image 03 gives the lateral view of the sensor. Scales are found on the transparent can which enable easy gripping. Between the “horns”, a bulge can be seen which holds the thermistor and provides temperature sensing ability to the sensor. 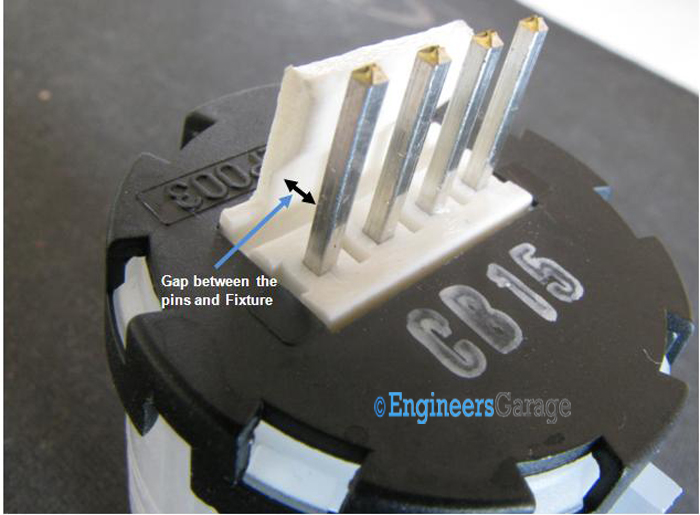 Fig. 4: Layout of Connecting pins at Bottom of Sensor

The emergence of connecting pins is clear from the bottom view of the sensor. Extending from the base of the white plasticized fixture, the pins are thick enough to bear sudden jolts or undesired mechanical forces. 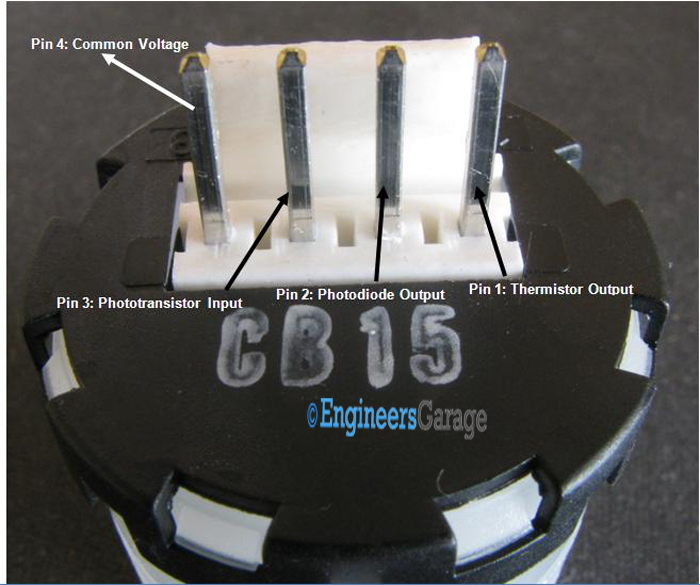 Pinouts can be read from right to left manner as mentioned in image05. Let’s have a view what each pin represents:

Pin1: This pin connects to the thermistor of the sensor and transmits the signal generated by it to the microcontroller of the gadget on which it is built.

Pin2: Pin 2 connects to the photodiode of the sensor. This component acts as an output device for turbidity measurements.

Pin3: Pin 3 is the extension of the photo transistor, the input unit for the sensor.

Pin4: This is the common voltage for the sensor.

There is no provision for a ground pin as Pin 2 and Pin 3 are connected externally to ground when the sensor is mounted on a gadget. 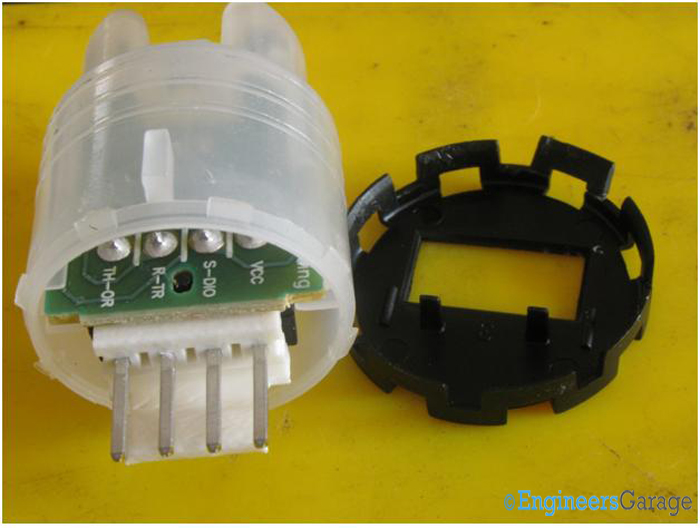 Fig. 6: Placement of PCB in Sensor 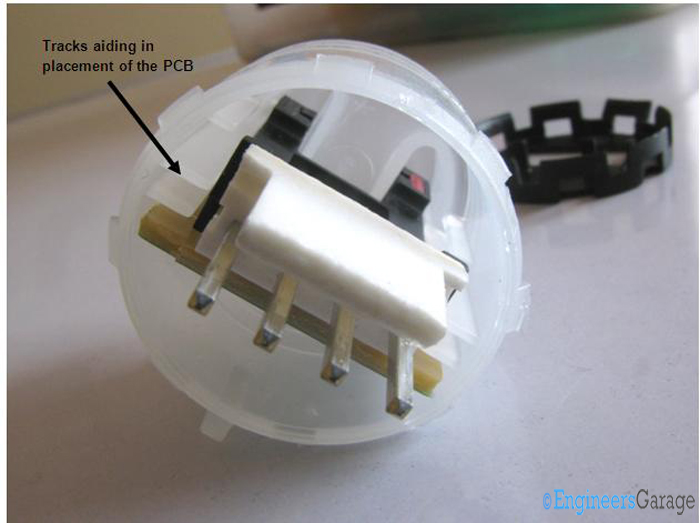 The cap is tightly adhered to the transparent can as its removal exposes the internal circuitry in one go!  All the components inside the plastic chamber are embedded on a PCB. The PCB is placed on a track that fixes its position in the sensor. 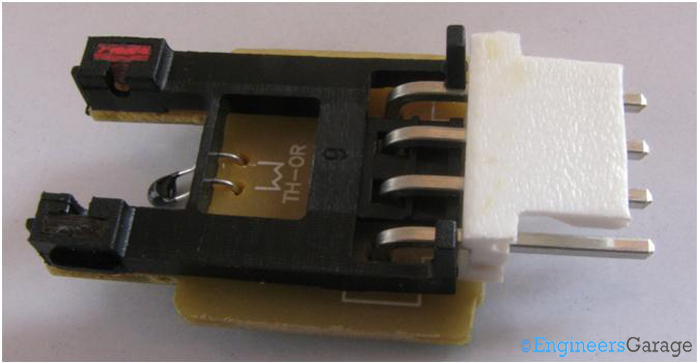 The brown colored PCB surface is mostly occupied by a black frame while a thermistor rests in a bent position. This bent position helps in placing the thermistor in the bulge of the transparent plastic can. 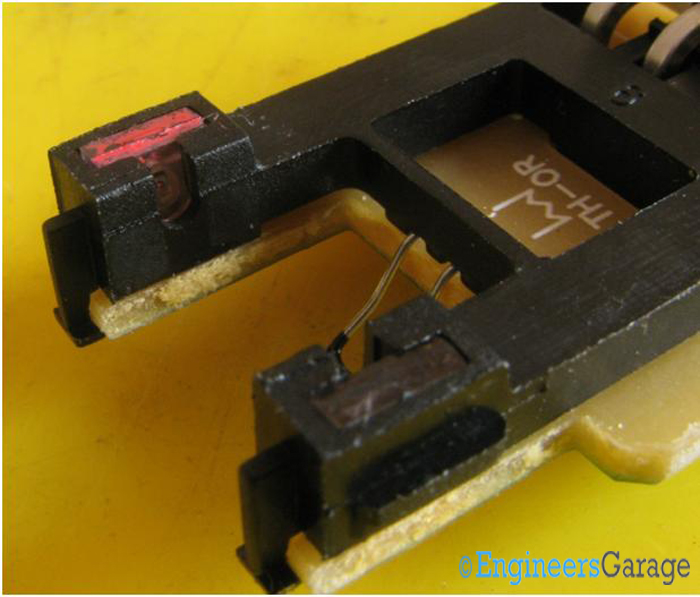 On close observation, a phototransistor and a photodiode are seen to be soldered on the PCB.  It is these two components that are placed beneath the horn like projections of the plastic can. 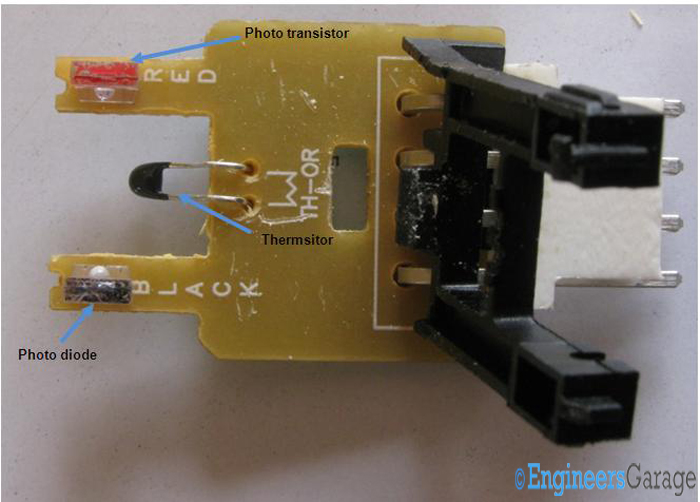 Fig. 10: Arrangement of Components of Photodiode Region of PCB

The black plastic frame is levered upwards in order to get a clear view to the photo transistor and the photo diode region of the sensor. The component soldered in red is the transistor while the one in black is the diode. 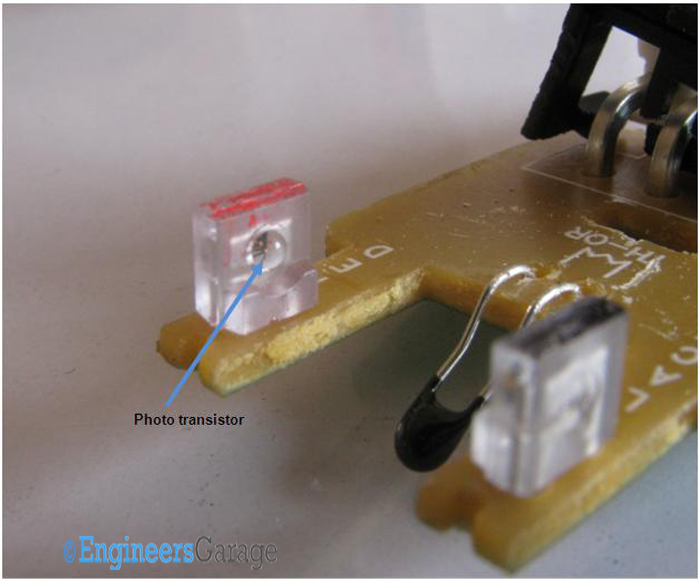 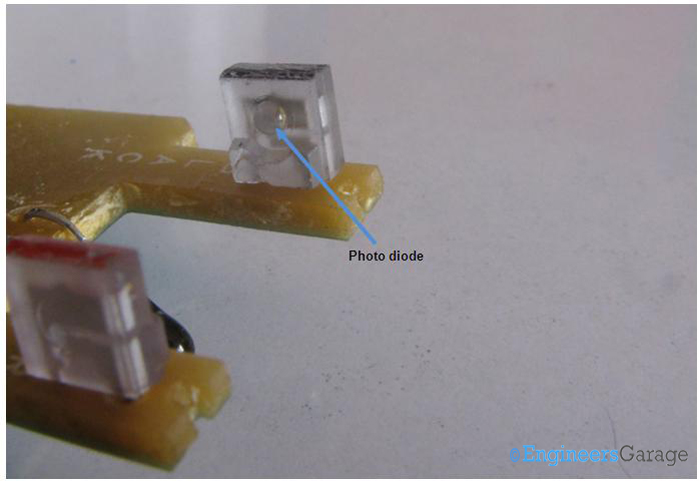 Photo transistor and photodiode appear quite similar in their structure and need fair distinguishing method. One method is to measure the resistance in dark, while a phototransistor would give an output, photodiode would be unable to respond in terms of resistance as there would be no light. This is the reason why a transparent can has been chosen: to ease the light transmission between the photo transistor and photo diode.

Another method is to color code them as it has been done in this sensor.

Also, one can analyze the tracks on the reverse side of the PCB to find out which component is photo diode and photo transistor. 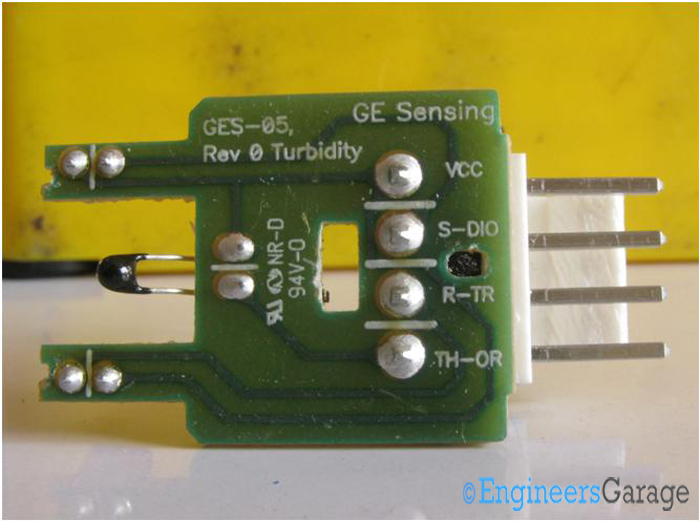 Since there is no microcontroller involved in the sensor, it is interesting to know the reasons for the pinouts of the sensor.  On close examination, tracks connecting the embedded components to their respective pins can be seen as shown in image. Presence of sulfuric acid that has been used as conformal coating over the PCB can be smelled.

Working of Turbidity Sensor:  Water flows between the two projections of the transparent plastic can. These projections house the photo transistor and the photodiode respectively. The phototransistor emits light rays that are supposed to reach the photodiode. These light rays come across the water flow and lose their path when they meet any suspended particle in the water. As a result, the light received at the photodiode is less in amplitude when compared to that when it was emitted.  This difference in amount of light sent and received is conveyed to the micro controller operating the sensor and decisions are taken in accordance to that. For instance, in case of more turbid water, a dishwasher will increase water cycles and would less recycle the water.