Continue to Site
VR Challenger League- the first competitive VR esports event- has finally kicked off. The league was officially announced last month by Intel, Oculus, and ESL during the E3. And now Intel has made an official declaration that the first brackets of the gaming series are now open online.
The whole league will take place online at some key events with participants from all around the world. As of now, “The Unspoken” from Insomniac Games and “Echo Arena” from Ready At Dawn Studios” are open to teams across North America and Europe. As per the official claims, Echo Arena is one of the best VR games that have been tested. It will be released on Oculus Rift alongside Lone Echo on July 20th.
A cash prize of more than $200K has been fixed for the Summer of Rift’s esports blowout throughout the league. Intel will be hosting the finals culminating at the 2018 Intel Extreme Masters, which is currently the longest-running global pro gaming circuit. 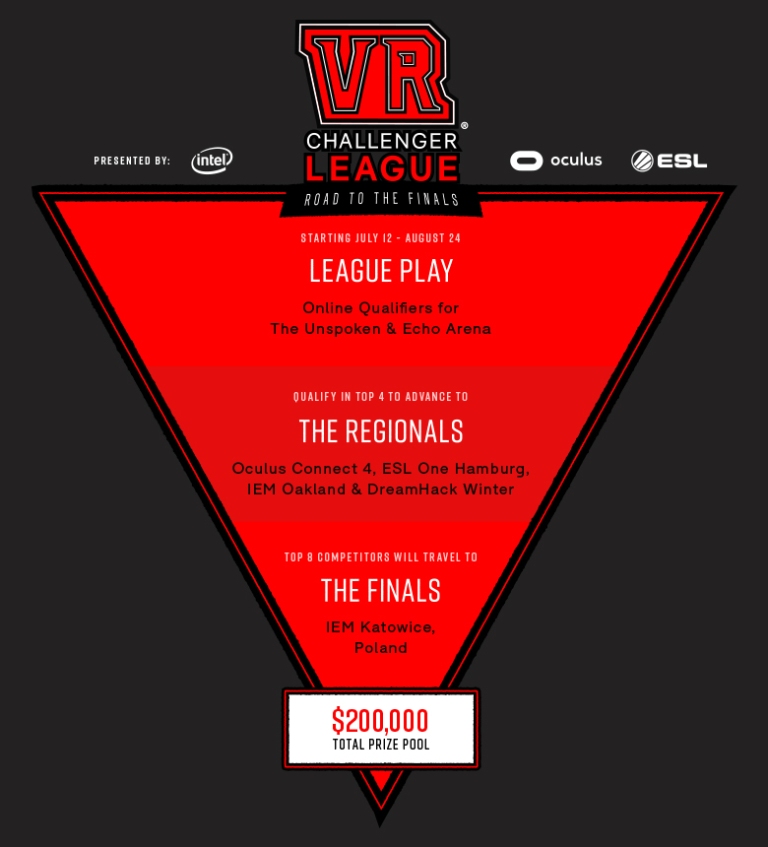 Intel Announces the Commencement of VR Challenger League (Image Courtesy: Intel)
The online qualifiers for “The Unspoken” followed by “Echo Arena” will start on August 24 and the winners will be then fed into a series of regional finals viz.
• Oculus Connect (October 11 – 12)
• ESL One Hamburg (October 28 – 29)
• IEM Oakland (November 18 – 19)
• DreamHack Winter (November 30 – December 3)
After going through all these regional games, the finalists will head to Katowice, Poland for the main game at 2018 Intel Extreme Masters. With this commitment, Intel is aiming to accelerate the pro-competitive VR gaming (VR esports) as well as the global growth of esports. These experiences enable participants and players to actively participate in enhancing the PC gaming so as to take it to the next level.

Intel Corporation is an American multinational corporation and technology company headquartered in Santa Clara, California that was founded by Gordon Moore and Robert Noyce. It is the world’s largest and highest valued semiconductor chip makers based on revenue and is the inventor of the x86 series of microprocessors: the processors found in most personal computers (PCs).
Intel supplies processors for computer systems and manufactures motherboard chipsets, network interface controllers and integrated circuits, flash memory, graphics chips, embedded processors and other devices related to communications and computing.
Filed Under: News
Tagged With: Intel, Technology