Continue to Site
Recently, Intel participated in the Unmanned Aerial System (UAS) Traffic Management (UTM) trials conducted by NASA and the FAA, alongside X’s Project Wing. The aim of these trials is to develop and test guidelines for collaborative communications and navigation (C&N) among unmanned aerial systems in the sky.
The trials are designed to test safe operation of multiple UASs sharing the same airspace by recreating typical scenarios of what a UAS operator might encounter when commercial drone flights become commonplace. The latest phase of these trials evaluates technologies allowing flight path conformance monitoring, dynamic adjustments to drone operation plans, and contingency management. This demands co-ordination between the UAS and the traffic management system both for flight planning and real-time flight monitoring.
Owing to the capabilities and flexibility of the Intel Aero Ready to Fly Drones, the team rapidly prototyped a UTM solution that met Project Wing’s UTM service requirements. Moreover, the collaboration with Project Wing helped in executing a much larger number of test flights during the trials than originally planned. 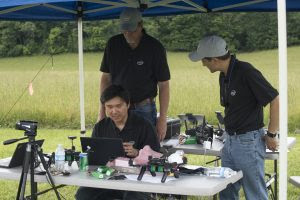 Intel’s Yun Wei, Dale J. March, and Karim Tadros work on Intel Aero Ready to Fly Drones during NASA UTM Trials
(Image Courtesy: Intel)
While the Intel team simulated an automated search and rescue operation using multiple Drones, the Project Wing team flew package delivery operations through the same airspace. Intel’s drones communicated flight plans and real-time locations through its onboard LTE modem to Project Wing’s traffic management platform which, in turn, instructed each drone to a safe flight path.
The Intel Aero Ready to Fly Drone is an open-source Linux-based platform, purpose-built for developing and testing end-to-end UAV solutions. It is an optimal programmable UAS to assist with exploring advanced use cases, such as flights beyond the line of sight. Features like LTE communications and integrated depth-sensing and vision technologies allow commercial UAS developers the ability to pursue even more sophisticated capabilities.
The UTM trials are an important step in making the skies safer and more secure by managing drone traffic, helping to improve flight efficiency and reducing collisions in the air. The outcome of these UTM trials will pave the way for the standardization of how drones will communicate with each other and other unmanned aerial systems.
About Intel
Intel Corporation is an American multinational corporation and technology company headquartered in Santa Clara, California that was founded by Gordon Moore and Robert Noyce. It is the world’s largest and highest valued semiconductor chip makers based on revenue and is the inventor of the x86 series of microprocessors: the processors found in most personal computers (PCs).
Intel supplies processors for computer systems and manufactures motherboard chipsets, network interface controllers and integrated circuits, flash memory, graphics chips, embedded processors and other devices related to communications and computing.
Filed Under: News
Tagged With: Intel, Technology