Intel Labs recently came up with one-of-the-first cryogenic control chip called ‘Horse Ridge’. This unique chip will speed up the development of the complete stack of quantum computing systems. It will also take-in control of multiple quantum bits setting up a clearer path towards scaling of larger systems. It is being considered as a huge milestone in the path of quantum practicality. 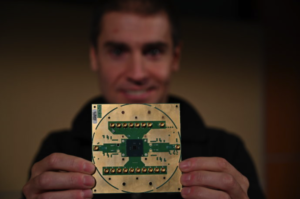 This product was developed under the collaboration of Intel, QuTech, TU Delft, and the Netherlands Organization for Applied Scientific Research (TNO).

Horse Ridge is based on Intel’s 22nm FinFET technology. The company plans to fabricate these control chips in-house. It will play a major role in the acceleration of Intel’s ability to design, examine, and optimize the commercial viability of quantum computers.

What is the importance of this product?
The designers at Intel were striving hard to realize the potential and power of quantum computers. Researchers, on the other hand, kept their clear focus on qubit fabrication and creation of test chips that could illustrate the power of a smaller number of qubits operational in superposition.

Previously, Intel faced several hurdles in commercial-scale quantum computing, including control electronics and interconnects. Horse Ridge is helping Intel bring-in an elegant solution that will allow the firm to take control of multiple qubits and setting up a clear road to scaling future systems toward larger qubit counts.

Understanding quantum practicality
Quantum computers have an assured potential of handling and controlling problems that are not possible for regular conventional computers. These computers are capable of leveraging a quantum physics phenomena that let qubits exist in multiple forms simultaneously. This allows qubits to carry out a huge number of calculations in one go. This efficiency lends the machine with exceptional problem-solving capacity.

The quantum research community is still at the start of the road that demonstrates quantum practicality. The quantum practicality will determine if a quantum system will be able to deliver revolutionary performance to sort out real-world problems. Intel’s recent investment in quantum computing takes care of complete software and hardware stack in pursuit of commercialization and development of a commercially viable and practical quantum system.

Understanding Horse Ridge
Horse Ridge is a mixed-signal, highly integrated SoC that introduces qubit controls inside the quantum refrigerator. It excels in bringing down the complications related to quantum control engineering from numerous cables running from and into the refrigerator to a unified, single package working near a quantum system.

Intel has designed Horse Ridge to work as an RF (Radio Frequency) processor that controls the qubits working inside the refrigerator. This device has been programmed with instructions interacting with most fundamental qubit operations. It translates instructions into electromagnetic microwave pulses capable of manipulating the original state of qubits.

Additionally, Intel has designed this chip to work at cryogenic temperatures, meaning it can work even when the mercury falls to 4 Kelvin. The concept of Horse Ridge reflects the progress Intel has made with respect to silicon spin qubits. Silicon spin qubits feature properties that enable working at 1 Kelvin, a temperature figure close to zero degrees.

At present, a quantum computer works within the millikelvin range, but spin qubits extend this ability to 1Kelvin and temperatures higher than that. This completely eliminates the need for refrigeration of quantum systems.

In the words of maker
Jim Clarke, the director of Quantum Hardware at Intel, explains, “While there has been a lot of emphasis on the qubits themselves, the ability to control many qubits at the same time has been a challenge for the industry. Intel recognized that quantum controls were an essential piece of the puzzle we needed to solve in order to develop a large-scale commercial quantum system. That’s why we are investing in quantum error correction and controls. With Horse Ridge, Intel has developed a scalable control system that will allow us to significantly speed up testing and realize the potential of quantum computing.”