We always come across the term ‘‘Process’ in various Linux tutorials. In this tutorial, I will explain what the process is and how it works. If I want to make my passport but I don’t know what is the process. I will go to the inquiry window and ask about  it. Process is nothing but carrying out a task. My task is to make passport and process is how to make passport.

Process is an instance of program code in execution within the operating system. In computer machine, various applications run at the same time and they share the resource like printer, disk drive etc. Let’s discuss one more example. I want to print some documents from computer and the printer is connected with my computer. My task is to print the documents and process is some code which  allocates documents to printer and asks to print it. These are generally created when we want to use them and are destroyed after use. Processes have more or less significant life and generate one or more child processes. In terms of kernels, the purpose of process acts as entity to which system resource are allocated.

Each and every process is created from some initial point in system called parent process. Child Process copies the address from parents and run in same address space. In Linux, some processes are light weight processes which support multithreading application.

Process includes CPU’s register, program counter, stack, heap and data memory and other resources. It can also share the file and hold the data on physical memory. Two processes also synchronize with each other and share common data.  Each process has its own process ID. In System, some processes are running, some are in waiting list and some are stopped. Operating system needs to carry out whatever is done in a process. *(line is not clear) 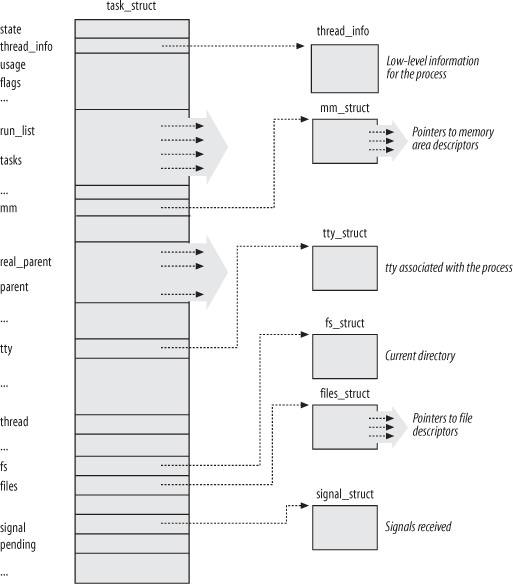 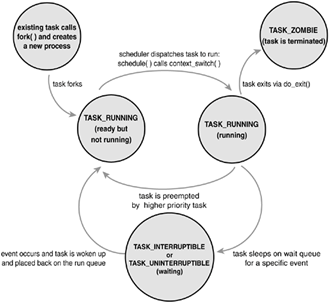 TASK_RUNNING – This flag describes either a process being executed on CPU or waiting to be  executed. This state can be run both in user space and kernel space.