The advantage of interpreters is that they can execute a program immediately. Secondly programs produced by compilers run much faster than the same programs executed by an interpreter. However compilers require some time before an executable program emerges. Now ascompilers translate source code into object code, which is unique for each type of computer, many compilers are available for the same language.

So the definition of cross compiler is a compiler that runs on one computer but produces object code for a different type of computer. Cross compilers are used to generate software that can run on computers with a new architecture or on special-purpose devices that cannot host their own compilers. Cross compilers are very popular for embedded development, where the target probably couldn’t run a compiler. Typically an embedded platform has restricted RAM, no hard disk, and limited I/O capability. Code can be edited and compiled on a fast host machine (such as a PC or Unix workstation) and the resulting executable code can then be downloaded to the target to be tested. Cross compilers are beneficial whenever the host machine has more resources (memory, disk, I/O etc) than the target.  Keil C Compiler is one such compiler that supports a huge number of host and target combinations. It supports as a target to 8 bit microcontrollers like Atmel and Motorola etc.

Why do we need cross compiler?

There are several advantages of using cross compiler. Some of them are described as follows

•         By using this compilers not only can development of complex embedded systems be completed in a fraction of the time, but reliability is improved, and maintenance is easy.

•         Knowledge of the processor instruction set is not required.

•         A rudimentary knowledge of the 8051’s memory architecture is desirable but not necessary.

•         Register allocation and addressing mode details are managed by the compiler.

•         Keywords and operational functions that more nearly resemble the human thought process can be used.

•         The library files that are supplied provide many standard routines (such as formatted output, data conversions, and floating-point arithmetic) that may be incorporated into your application.

•         Existing routine can be reused in new programs by utilizing the modular programming techniques available with C.

•         The C language is very portable and very popular. C compilers are available for almost all target systems. Existing software investments can be quickly and easily converted from or adapted to other processors or environments.

Keil is a German based Software development company. It provides several development tools like

Keil Software provides you with software development tools for the 8051 family of microcontrollers. With these tools, you can generate embedded applications for the multitude of 8051 derivatives. Keil provides following tools for 8051 development

An assembler is used to assemble your 8051 assembly program

A linker is used to create an absolute object module suitable for your in-circuit emulator.

now let us start how to work with keil.

Keil is a cross compiler. So first we have to understand the concept of compilers and cross compilers. After then we shall learn how to work with keil.

to open keil software click on start menu then program and then select keil2 (or any other version keil3 etc. here the discussion is on keil2 only). Following window will appear on your screen 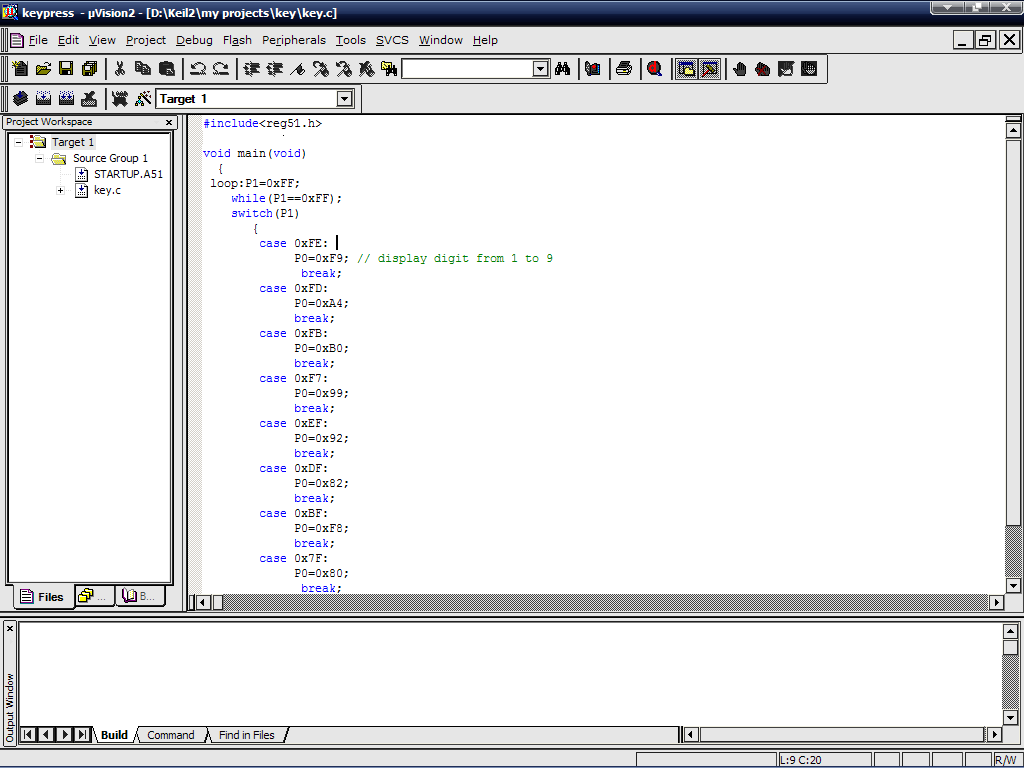 Project workspace window is for showing all the related files connected with your project.

Editing window is the place where you will edit the code

Output window will show the output when you compile or build or run your project.

Now to start with new project follow the steps 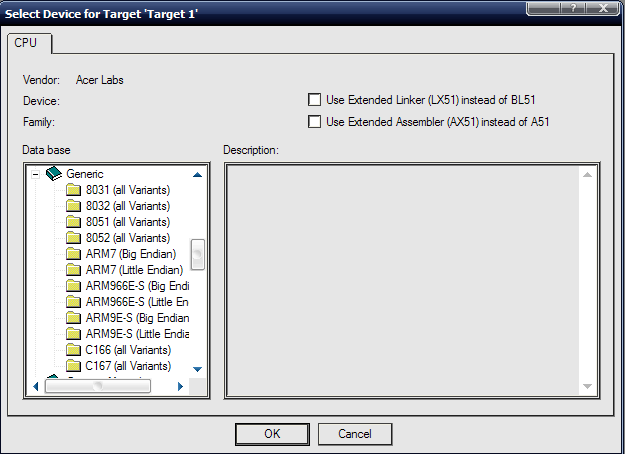 when you click OK, you will be asked to add startup code and file to your project folder. click yes. Now on your screen expand target1 list fully. You will see following window.