The project is one of the experiments being done in recent time on internet of things and its application. Here we will talk about the process of creating an Arduino based IoT control setup application over internet, which will be cheap and have more customized solution to specific use cases. The author has used Recycled components and there is no patented or proprietary protocols. This application features person-to-machine and machine-to-machine communication in easy manner and also shows that how it can be integrated with other modules like Recording, Multiplexing and transcoding.

For hardware, Raspberry pi as communication hub to internet is required and an ultrasonic sensors to detect obstruction in field of view. Further, a camera module of Raspberry pi or any standard webcam along with motion Sensors and buzzer is needed. Make sure to have mic and flash lights connected via relay drivers to raspberry pi.

In Software department, we require an open CV for image processing and Simple CV for face recognition. A motion and webrtc for media live streaming in case of remote monitoring 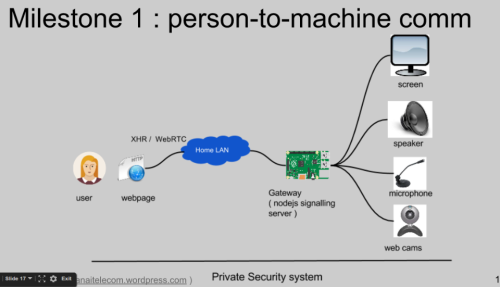 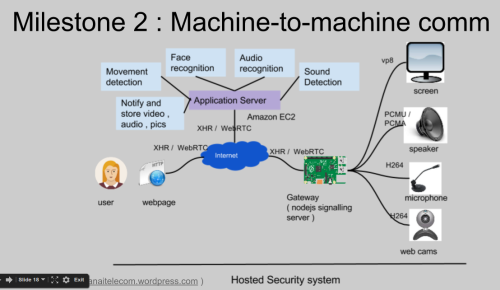 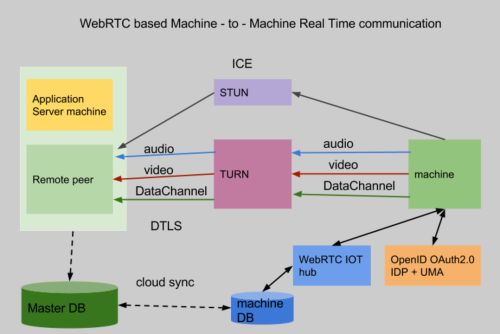 The modules include Ethernet, Wi-Fi and its variety and near field communication that is NFC. The wires of Ethernet can connect raspberry pi to a machine such as laptop from which it can be connected via terminal or using remote desktop accessing software. NFC uses electromagnetic induction in between two loop antennae in devices to exchange information. These are raspberry pi communication modules.

For Audio or video streaming, you first have to enable the raspberry pi camera support from the boot screen. It provides many ways to stream data from a Raspberry pi, here we represent two of them.

Install uv4l and supported software. If you want the driver to be loaded at boot, also install optional package also. Then install the WebRTC extension for the Streaming Server followed by webserver on raspberry. It is important to decide the stream methodology once you have captured the media and have established the stream. For example a relay through a centralized media server or mesh streaming network as in WebRTC p2p.

Internet of Things projects are the next big thing in future and now associated with everybody’s life whether it is TV, mobiles, CCTV camera or other things that are connected to the Internet. It enables us to make interconnections controlled, monitored and optimized. It is applicable in almost every field whether it is manufacturing, healthcare or logistics, its influence can be seen everywhere.