Continue to Site
A new method of shifting fluid droplets across in a controlled manner has now been introduced by scientists. This technique could introduce novel possibilities for exceedingly adaptable microfluidic gadgets, as well as for de-icing methods, effective condensers and self-lubricating surfaces. The novel system utilizes differences in temperatures to regulate droplets of water or other similar fluids across an even surface, enabling an accurate control by just tuning coolers and heaters off and on. 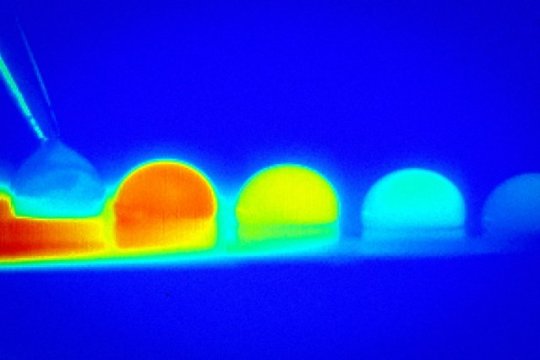 The study has been executed by a new team of scientists from MIT. It is based on the differences in temperature level to push droplets of water as well as other types of fluids across a smooth area. The finding is performed and introduced by associate professor of MIT’s mechanical engineering department, Kripa Varanasi and Professor David Quere at ESPCI in Paris. The team also comprises a Ph.D. student Henri-Louis from Nada Bjelobrk, Srinivas Subramanyam and Hyuk – Min Kwon.
The differences between the temperature levels at various surfaces result in a change in the volume of surface tension across the droplet. This results in the movement of droplet towards the direction of energy that is lower from the direction of energy where surface tension is higher. But it works only if the surface is well treated in a way that it combats droplets from getting pinned to it.
The treatment of the surface is one that the Varanasi along with his team associates has been introducing for years. It creates the basis of an initial company known as LiquiGllide that is commercializing the methodology for use in small containers, like ketchup bottles that can conveniently pour out all the contents.
Also, the treatment comprises texturing of a surface at the microscale and then embedding it within a layer of oil that fills the gaps between the posts and becomes captured there by capillary forces. Such trapped lubricant creates the surface slippery for the droplets. Moreover, the droplets possess a considerably high contact area with the surface, enabling for a much bigger temperature difference across the droplet and a bigger propulsion force. As compared to this, droplets did not shift on superhydrophobic areas inspired by lotus leaves as their contact area is too tiny for the gradient of the temperature to be enough to move the droplet.
The basic result this group is exploiting, known as a thermocapillary motion that has been illustrated before by other scientists, but in such cases the procedure needed very big temperature differences and even then generated only slow movements, making it waste for most of the applications.
The novel system, with its smooth surface, needs much smaller temperature alterations and drastically speeds up the movement. According to Varanasi, “There have been multiple efforts made to use thermocapillarity to boost water droplets on surfaces.” Till now, it is expected that the finding would be useful to produce novel sorts of microfluidic gadgets, for instance, those used in chemical or biomedical testing. It is because such devices would be able to use an assortment of cooling and heating elements to transform the configuration of flows.
Filed Under: News