Kernel is a small and special code which is the core component of Linux OS and directly interacts with hardware.  It is the intermediate level between software and hardware  which provides low level service to user mode’s components. It is fully developed in C language and file system architecture Moreover, it has different blocks which manage various operations. .In this tutorial we will learn about kernel architecture of Linux.

Kernel  runs a number of processes concurrently and manages the various resources. It is viewed as a resource manager when several programs run concurrently on a system. In this case, the kernel is an instance that shares available resources like CPU time, disk space, network connections etc.

In the  traditional monolithic kernel architecture, all the basic system services like process and memory management, interrupt handling etc. were packaged into a single module in kernel space. Module is an object file in which the whole code can be linked to kernel at run time. Huge space is consumed by traditional monolithic kernel and maintenance level is very low. It takes few hours for recompilation if some new feature is added because all the services are attached into one single module.

Modern monolithic kernel architecture consists of different modules which can be dynamically loaded and un-loaded. In this way maintainability is very easy because kernel needs to take care of only loaded module. Recompilation is not required upon added feature or some changes. Monolithic kernel is faster than micro kernel. 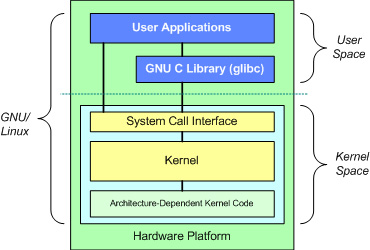 All user programs and applications are executed in user space. User Space cannot directly access the memory and hardware.  It accesses the hardware through kernel space. Processes or programs which are running in user space only access some part of memory by system call. Due to full protection, crashes in user mode are recoverable.

Kernel is independent from hardware. It is common for all Hardware processors which are supported by Linux. You can run kernel on any processor like Intel, ARM, Atmel etc.  It acts as a resource manager in Kernel space and performs process management, file management, memory management, Interrupt handler , scheduling of process, etc.  It is a powerful structure which handles all kinds of operations. 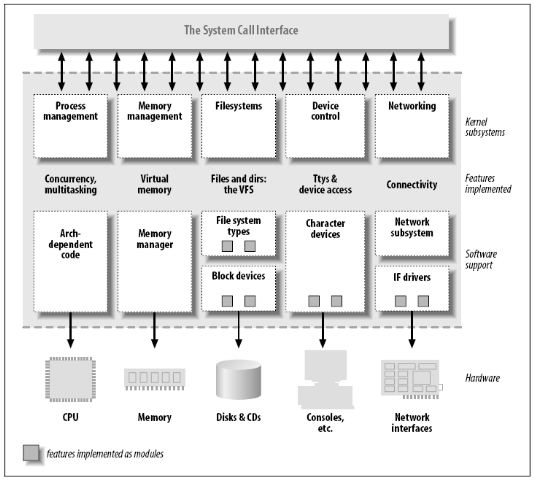 Kernel architecture follows modular approach. Each block in kernel (i.e. file management) is nothing but piece of code written in C language. Each block consists of powerful structure for handling various operations.

Process management is handling the management of various processes which are run at the same time. Process is an instance of ‘program in execution’ like open the file, access drive, access external resource (i.e. printer), etc.  and can be created and destroyed. Process management gives the information of what’s happening with a processand manages its priorities, such as which address should be assigned to process, file allocated to process, state of process (like running, waiting, stop) etc. I will explain in brief about process in another tutorial.

The Linux file system is a hierarchically data structured tree which organizes the file system. File is simple data structure (in form of some byte of memory) which can store any kind of data like text, image, video, music and whatever you want in computer. Linux file system is organized as a directory in tree form. Directory is a collection or group of files. Two types of directory are available in Linux system: 1) root 2) Sub directory. Root is main directory and cannot be accessed without permission of super user. It is the parent and main directory in file system denoted as forward slash ( / ). Sub directory is under the root directory which can be created or renamed by user. Linux supports number of file types like ext2, ext3, device file, block file, networking file system etc. Each file system is stored in different a disk partition.