Almost four years back Las Vegas replaced all its high-pressure sodium street lights LEd fixtures and found that the electrification cost went down by fifty percent and ended up saving amount worth $1.5 million annually. However, the city is now ready to move a step ahead.by choosing the EnGoPlanet’s Smart Solar Streetlights. These will be off-grid lights that will harness energy from footsteps as well as solar light, these will be stored over on-board batteries. These will be used in empowering high-efficiency LEDs. For the beginning, they will be installing four lights and the results will decide whether they need to be adopted or not.

These lights have Cree LED chips that are capable enough to deliver 115 lumens per watt, th street lights can be availed in three options: 80W, 60W, and 30W. These lights will be working for 12 hours a day and will consume 360 and 960 Watt-hours per night. The high-efficiency solar panels are capable of delivering highest output worth 210 Watts or 420 Watts. As las Vegas receives light only for six hours a day, this concept will be highly useful and generate e1.2kWh energy every day. This is much more than what they will need for one night. 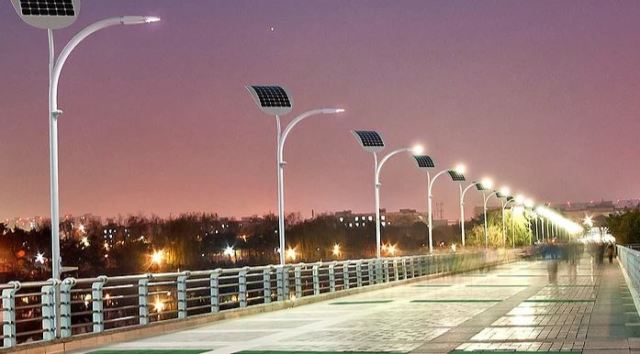 A result footstep offers force worth 80 million dynes over the walking surface. EnGoPlanet’s team of designers created kinetic tiles that can harness walking energy for electricity generation. The technology used here is slightly similar but whole lot different from the one used by Energy Floors. For increasing power delivery the designing team added piezoelectric devices to it. Every single step that is taken over these tiles generated energy worth 4-8 watts of power. A few tests on these displayed that all those places with high pedestrian traffic, a single square meter of kinetic tiles were able to generate power worth 125-180 Watt-hours in every twelve period. These are also capable of storing energy and send the generated energy for storage to AGM VRLA batteries bank. This battery bank has capacity to store power worth 1.2-3.6 kWh.