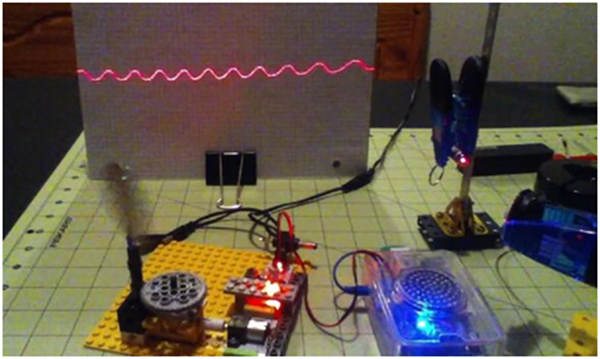 Mashable defines Kano as a DIY computer kit designed to help people of all ages assemble a computer from scratch, and learn basic coding skills. This DIY takes a Kano and shows how to drive a littleBits motor with an optocoupler. An octocoupler, yes. (Too many fancy words already? Stay with me.) An optocoupler, says Wikipedia, is simply a component that transfers electrical signals between two isolated circuits by using light. Got it?

Once you do that build a laser mirror spinner using Lego. The maker has beautifully shown the various steps of construction through neat images. Then, test the laser spinner using Keno. See a demonstration of this test in the first video below. After the test is successful, construct a laser mount, a speaker mount, and a graph paper display screen. Once you assemble all the parts and put them into operation, together they form what you can call a Laseroscope. The second video demonstrates how it works.