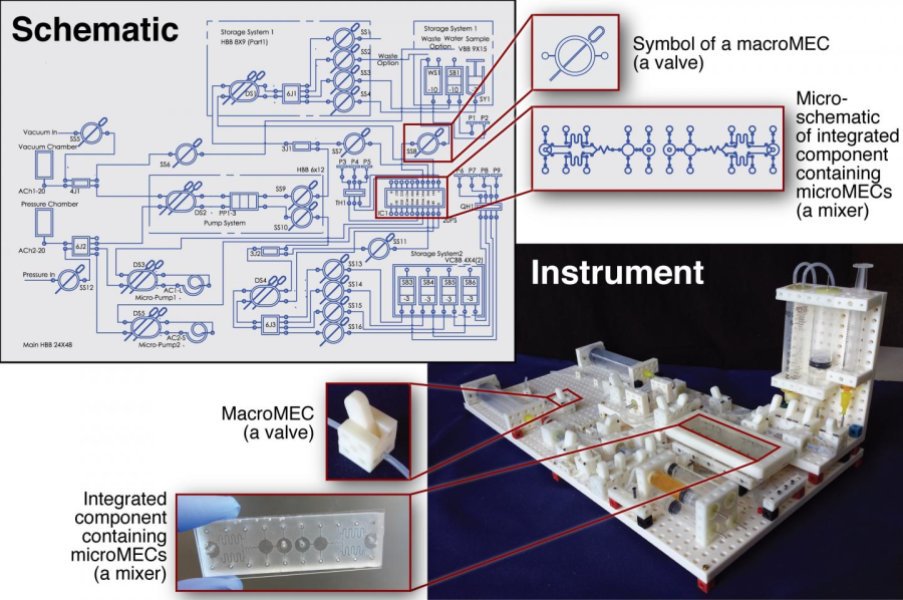 Constructing lab equipment for biology and chemistry experiments were a costly affair and time-consuming procedure. Also, it was a process that was done only by researchers with skilled training. But with the introduction of a 3-D printed and Lego-like device of blocks, there is the absolute transformation of this procedure. Besides being supportive in virtual research applications, the procedure is also useful for STEM education where students avail an engineering experience as well as gain knowledge of structuring an all new instrument.

The experiment has been conducted by the team of students and scientists at the University of California, Riverside. The group has outlined an all novel instrument that can be used to serve distinct applications used in schools, labs, hospitals and other areas of the university. The instrument is useful in any field where there is a requirement to generate scientific tools.

These blocks have been named as Multi-fluidic Evolutionary Components or MECs. They have been provided with such a name because of their excellent adaptability and malleability. Each block in the gadget performs a simple task found in the lab instrument, such as pumping fluids, outlining measurements or interfacing with a user. Since, such blocks have been crafted to perform together, so users can create apparatus such as bioreactors for preparing alternative fuels or acid-based titration equipment for big school chemistry classes – effectively and swiftly. The blocks are particularly well applicable to prepare an array of distinct diagnostic and research tools.

This project is headed by Douglas Hill, a student performing with William Grover, an assistant lecturer of bioengineering in the Bourns College of Engineering UCR. Before combining with the UCR’s program in Bioengineering, Douglas Hill worked in the domain of electrical designing for almost 20 years, where he utilized electrical components that were prepared to perform with each other.

“When Douglas entered into the UC Riverside, he was slightly surprised to find out that the bioengineers crafted novel instruments from scratch,” says Grover. “Also, he has utilized to place together a couple of capacitors and resistors and creating a novel circuit in a just a couple of minutes. But structuring novel tools for the research of life science program can take years or even months. Douglas aimed to change all that.”

Hill and Grover are now scheduling to pilot the system of MEC in two schools of California district, where it will support the currently work introduced. The work has been introduced by the name of ‘Next Generation Science Standards,’ a multi-tasking initiative to fortify science education.

“The Future Generation Standards of Science need that the teachers offer their students with adequate engineering experiences, but most of the times, it is quite hard for the teachers, specifically in chemistry and biology classes, where the students may not have proper tools they require. With use of this blocks system, the students can gather an excellent engineering experience by building, refining and designing instruments,” says Grover. As per Hill, the long-term goal of the team is to make the MEC block affordable and available for use to others.