Cells house a number of chemical reactions and their precision has always remained a matter of envy for scientists and researchers. However, a team of researchers from Bordeaux INP and CNRS came quite close to it by controlling polymerosomes explosions with laser irradiation. These are basically hollow spheres of polymers that are capable of mimicking cellular functions of all types, reacting to a specific wavelength and capable of releasing content only when required.

Polymerosomes refers to artificial vesicles that mimic the organelles and compartments that are naturally found in nucleic cells. In this case, the research team trapped the fluorescent molecules inside the “giant” sized polymerosomes that have diameter of about a dozen micrometers. These fluorescent groups have several decomposition characteristics whenever light falls on them, however, this process sticks to a specific range of wavelength. When a particular level of irradiation brings degradation of these molecules which enhances the concentration of solute present inside the polymerosomes. This leads to an imbalance that is not compensated sufficiently with speed. This compels the vesicles to rupture in an explosive manner. 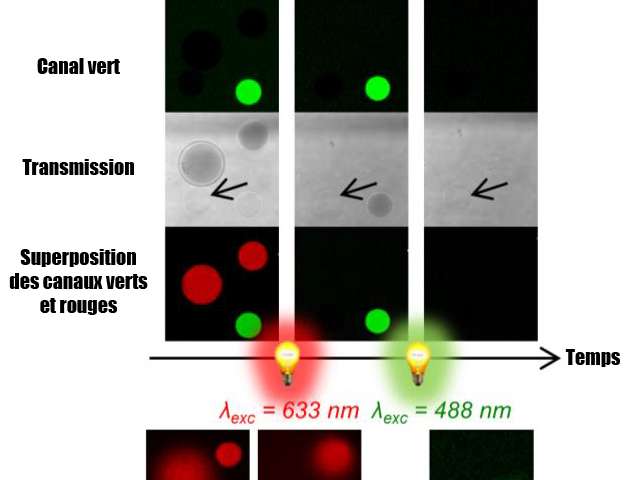 The team created three kinds of polymerosomes each of which has a particular fluorescent group that can react with various wavelengths. The researchers were able to attain control of that level which allowed them to study the vesicles closely and target those singly via a confocal microscope equipped with sufficient numbers of lasers. Along with light, there are several other control procedures that are being developed by several other researchers currently to explode the micro vesicles pH, temperature, magnetic strength, and so on. This research can open up door for several medical applications in upcoming time, however, for now research teams are observing the possibilities to release substances in a very controlled manner inside the artificial polymer cells. This will help them reproduce and understand a few metabolic reactions of biological cells in a better way.