Continue to Site
Coffee lovers often prefer roasting the beans at home before preparing their coffee. However, it requires a lot of time as well as money. Moreover, these methods may not be perfect for the desired quality of output. In order to resolve this issue, here’s a DIY project by Andrew and Paul who have built a setup using a Corretto Roaster. By making certain changes to the conventional roaster, they have succeeded in introducing an easy method of roasting your java at home. 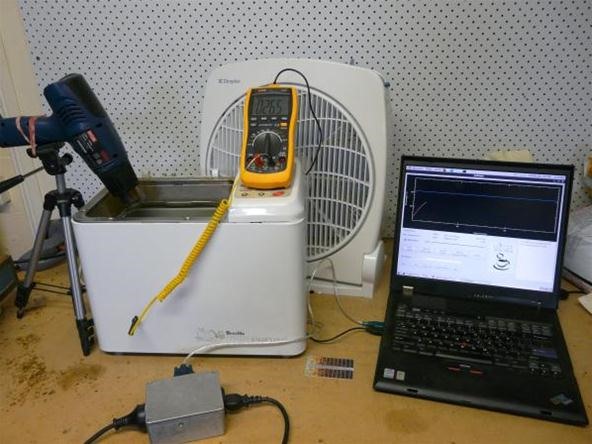 It is an economic and simple technique that involves the use of bread making machine, a heat gun, a fan, thermocouple, digital multimeter, USB, power control circuit, and a Linux computer. In a regular roaster, there isn’t any coding involved. Some beans are put inside the compartment and a heat gun is pointed towards it so as to heat it up and a fan is placed by the side which serves the purpose of blowing away the smoke. When the beans make a cracking sound that implies that the roasting is done.
With an aim to make this system even more advanced and effective, Paul and Andrew attached a thermocouple to the roaster so as to control the temperature inside by directly drilling it to the bread machine. As far as the heat gun was concerned, they fixed it on a mini tripod so as to keep its mouth fixed at a certain position.
There are several methods to position this heat gun. Some hold it themselves or some even remove the upper class of the bread machine and then make a hole to put the gun through it. In that case, a fan is not required to handle the smoke.
Then they connected a digital multimeter to the setup and hooked it to a Linux computer through USB cable. The data given out by this multimeter was then charted on the computer in the form of a graph.
Apart from this, a custom PIC-based power control circuit that was hooked via a serial port to control the output of the heat gun. The graph was drawn through the help of a Python application called pyRoast. It included information like time, temperature and the crack level of the beans. So by setting up all these components in a desired manner, you can roast your coffee beans for the enriched experience of a perfect java.
If you feel that you could also make a DIY Coffee Roaster then you may refer to the complete details of the project along with the coding in the link given below.
Filed Under: Reviews