What are custom characters?

How custom characters are made and displayed on 16×2 lcd?

Before beginning any further i recommend you to please take the 16×2 lcd display introduction tutorial. Taking the tutorial will let you know about the pin out and internal structure of 16×2 lcd.

16×2 lcd has an internal ​CG-RAM(character generated ram) in which we can generate or place our custom character. CG-RAM size is 64 bytes. We can generate/place 8 characters of size 5×8 at a time in CG-RAM. We can also place 5×10 size characters in CG-RAM but only 4. 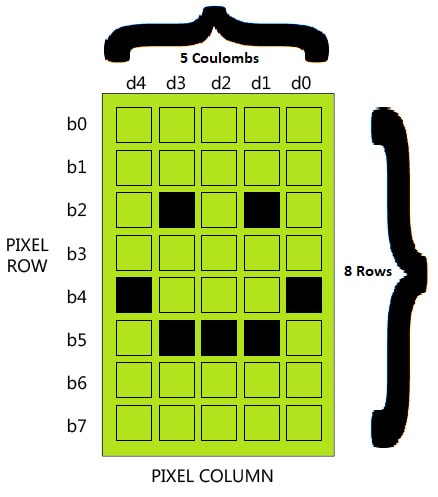 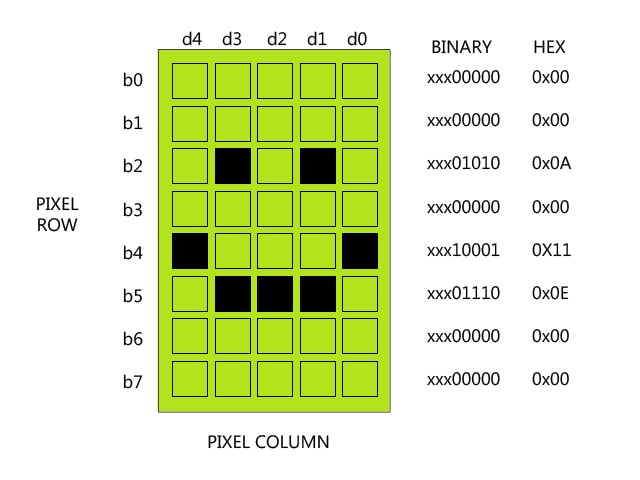 16×2 custom character smiley binary bits
The above binary or hex values are then arranged in a byte array. Byte array is then placed in to CG-RAM of 16×2 lcd. Now when we want to display this smiley character on lcd screen we just call its address in CG-RAM and finally the character will appear on 16×2 lcd screen.

recommend you to please learn about the custom character generation in internal hardware level first before proceeding.

For this project you only need a 16×2 character lcd and arduino uno microcontroller/board. You can use any other character lcd according to your wish but remember to change the lcd.begin(no of coulombs of lcd, no of rows of lcd) command in code and insert the dimensions of the lcd you are interfacing with arduino uno. Almost all the character lcd’s have same pin out and uses same hd44780 lcd controller. So their will be no difference in circuit diagram or remaining code. Hd44780 lcd controller is responsible to display characters on character lcd, communicate with external devices and CG-RAM also resides in HD44780 lcd controller.   In this project i am using 16×2 lcd in 4-bit mode so you have to make pin connections according to the 4-bit mode. Its not very hard just connect in the order given below

The code of the project is simple. I am going to display 8 custom character on 16×2 lcd. First the required characters byte array are declared in code. Byte arrays are declared in binary as well as hexadecimal format.

The createChar() command in ardunio ide is very important. It creates/puts the character matrix/array against an addres in CG-RAM of 16×2 lcd. In other microcontrollers we have to write the memory address where we want to place our newly created custom character but in ardunio the createChar() command creates the required character automatically and place it against an address in CG-RAM. createChar() function is part of LiquidCrystal library. If we open the library and see the function statements they are communicating with the HD44780 lcd controller and CG-RAM address are defined in the function. 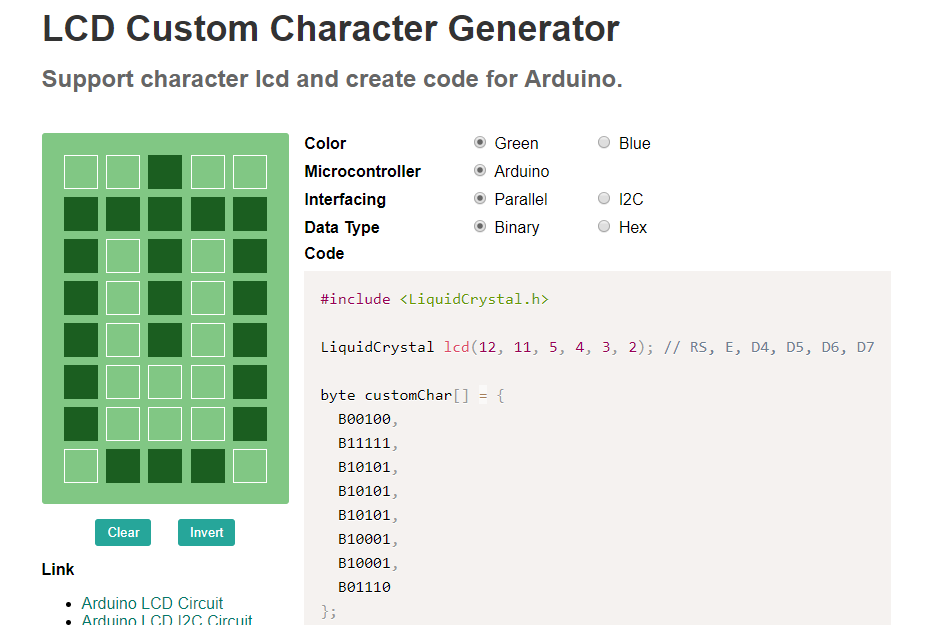 Download the project code written in arduino ide. Code is open source. Please provide us your feed back on the project. Write your questions and queries in the comments section below.
﻿Arduino custom character code
Filed Under: Arduino, Microcontroller Projects