The inductance meter is a device that can be used to measure the unknown inductance of an inductor or a simple coil. The project makes use of a tank circuit, in which there will be a capacitor and an inductor connected in parallel. The natural resonating frequency of the tank circuit varies with the presence of a metal in its proximity.The prototype has been developed using an easy prototyping platform, Arduino board. The prototype is built on a breadboard in which there is an inductor placed and any metal brought near to that inductor will trigger an alarm through a loudspeaker. For this project reader should have knowledge about how to start with arduino . 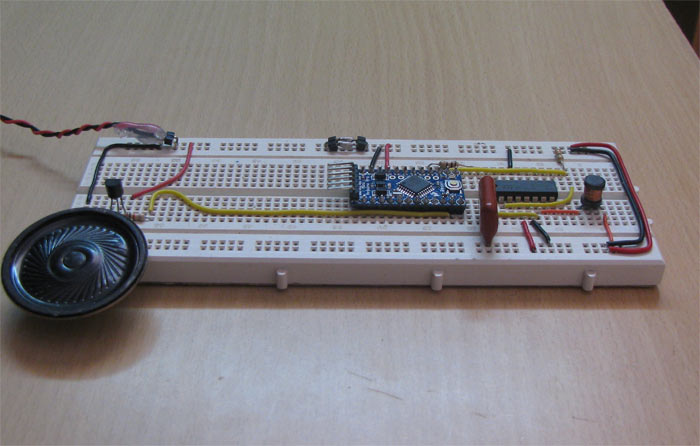 Damped oscillation is a kind of oscillation in which the frequency remains same, but the amplitude keeps on decreasing with each oscillation. However for a tank circuit made of inductor and a capacitor in parallel, the change in the inductance value due to the presence of a metal can change the frequency of its damped oscillation. The Arduino board in this project charges a tank circuit, in which the value of inductance need to be found out is connected in parallel with a capacitor. The Arduino board suddenly discharges it at a point of time and let is resonate. The frequency at which the circuit resonates will be measures and from that the inductance is measured.

The sound alarm is generated in the loudspeaker using another inbuilt function of the Arduino board ‘tone()’. It will generate a square wave with specified frequency at the required pin, as an example the following statement,

will generate a square wave of frequency 1KHz at pin number 8, and the wave will persist for a duration of 3 seconds.