Ethernet is slowly gaining an upper hand in spacecraft as it speeds up hardwired communication, facilitates interoperability between spacecraft and satellites, and supports higher data rates. To this end, Microchip Technology Inc. recently launched the industry’s first space-qualified Ethernet transceiver. 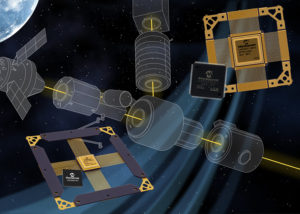 This new transceiver can tolerate radiations via a commercial off-the-shelf (COTS) solution. COTS is widely accepted and recommended across several industries that are working to offer reliable performance for various applications — such as space stations, satellite constellations, and vehicle launching.

Both devices are COTS-based parts with enhanced levels of radiation performance and reliability. They’re available in plastic and ceramic packages, and share the same pin-out distribution, letting designers begin implementation with COTS devices before moving to space-grade components. This significantly reduces development time and cost.

“As the first to provide both a rad-tolerant transceiver and an enhanced rad-tolerant micro-controller for the rapidly-expanding, high-reliability Ethernet market, Microchip continues to support space industry developments and evolution with qualified and proven solutions,” said Bob Vampola, associate VP of Microchip’s aerospace and defense group. “Microchip’s COTS-based space-grade processing provides the right performance and the right level of qualification to meet evolving requirements from Low-Earth Orbit constellations to deep space missions.”

These latest devices are among Microchip’s broad suite of COTS-based radiation-tolerant micro-electronics, supporting Ethernet connectivity to be used:

The VSC8541RT transceiver is a single-port Gigabit Ethernet copper PHY with GMII, RGMII, MII and RMII interfaces. Radiation performances have been verified and documented in detailed reporting. The VSC8541RT is latch-up immune up to 78 Mev and the TID has been tested up to 100 Krad. With the same rad-tolerant die and package, a 100 MB limited bitrate performance VSC8540RT is also available in plastic and ceramic qualified versions, which provides performance and cost scalability for targeted missions.

The SAM3X8ERT radiation-tolerant MCU implements on a System on Chip (SoC) with the widely-deployed Arm Cortex-M3 core processor, delivering 100 DMIPS benefits from the same ecosystem as the industrial variant. The SAM3X8ERT contributes to the system integration trend helping to drive the space industry toward more advanced technologies. This  micro-controller embeds up to 512 Kbytes Dual Bank Flash, 100 Kbytes SRAM, ADC & DAC and dual CAN controller on top of Ethernet capability.

Development tools
To support the design process and accelerate time to market, developers can use the Arduino Due commercial kit for the SAM3X8ERT along with the VSC8541EV evaluation boards for the VSC8541RT. The SAM3X8ERT device is supported by Atmel Studio Integrated Development Environment for developing, debugging, and software libraries.