In the previous tutorial, we learned how to generate analog output in the form of software PWM when using Raspberry Pi (RPi). We also showed how software PWM can be used to fade an LED.

The PWM output can also be used for other applications, such as for speed control of a DC motor or controlling a servo motor. As an embedded computer, RPi is capable of digital input, digital output, PWM, and implementation of various serial communication protocols (such as UART/USART, I2C, and SPI).

What is serial communication?
Serial communication refers to the sequential transfer of data over a wire. A nibble or byte is the smallest unit of information. A byte is made up of 8 bits whereas a nibble comprises 4 bits. Larger units include kilobytes, megabytes, gigabytes, and so on.

There can be two types of wired communication ports:

While general-purpose computers often use parallel ports for data communication because of their high transfer rates, embedded controllers and computers typically rely on serial ports. There are many reasons for this.

For one, serial ports involve less complex circuitry and can easily be integrated on a microcontroller or system on a chip (SoC). Also, embedded controllers/computers may interface with several devices, communicating with them in a single user program. It’s next-to-impossible to interface several external peripherals and devices with parallel ports because it would require several digital input/output (GPIO) pins.

However, it is possible to interface and communicate with hundreds of peripherals/devices using only two, three, or four channels of a serial port. There are serial communication protocols that support data transfer of fixed and variable data-packet size.

The term “protocols” refers to how the data is communicated, encoded, and decoded over the bus between the two devices, or between controller/processor and a device/peripheral. UART, USART, I2C, SPI, CAN BUS protocol, Microwire, 1-wire, and USB are examples of serial communication protocols (i.e. these standards refer to the encoding and decoding of data of serial data communication).

A standard may be an interface, a protocol, or both. For example, RS-232, RS-422, and RS-485 are serial interfaces that use a UART serial communication protocol. UART and USART are serial communication protocols that can be implemented by incorporating a UART/USART chip or a built-in UART/USART. The standards — such as I2C, SPI, CAN, Microwire, 1-Wire, and USB ­— are an interface and a protocol.

In general, these specifications apply to all serial communication standards: 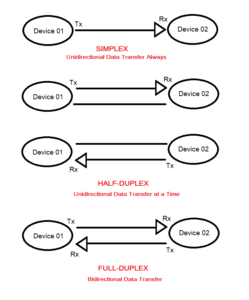 The specifications of some common serial communication standards (interfaces/protocols) are summarized here:

Serial communication on RPi
In the previous tutorials on digital input and output, we transferred data parallel. The GPIO pins on RPi can be considered parallel data pins, capable of digital data communication over 3.3V TTL logic levels. However, these GPIO pins are not arranged as ports (8, 16, or 32-bit ports) like in a microcontroller.

Raspberry Pi can communicate serial data with other devices using some of the common serial communication protocols, such as UART, I2C, SPI, and USB. There are two UART ports/interfaces, two I2C ports (one for HATS and other for external devices), two SPI ports, and four USB ports on RPi 3B/4B.

UARTs on RPi
The universal asynchronous receiver/transmitter or UART is typically referred to as “serial port” in computer terminology. Raspberry Pi is no exception. For RPi, the serial port term also exclusively refers to the UART.

The Broadcom SoC on RPi models have two types of in-built UARTs:

One of the two UARTs on the GPIO 14 (board pin 8) is the transmitter and the other, GPIO15 (board pin 10), is the receiver. This is the primary UART of RPi.

Generally, this primary UART is used by the Linux Console by default. This means that if the serial TTL port (GPIO14 and GPIO15) on RPi’s GPIO header has to be used for serial communication with a device using the UART protocol, then it needs to be configured using raspi-config (RPi configuration options).

GPIO14 and GPIO15 are referred to as serial hardware port or serial TTL port of RPi.

The secondary UART is not present on the GPIO header. Rather, by default, it’s connected to the Bluetooth side of the combined WLAN/Bluetooth controller.

The types of primary and secondary UARTs on different RPi models are summarized here:

Note: Mini-UART is disabled by default, irrespective of it being a primary or secondary UART. On RPi’s operating system (including Raspbian, Ubuntu, or any Debian-based Linux distro running on RPi), UARTs are identified as Linux devices as follows:

This image shows the location of the serial TTL port (the Tx and Rx pins of the primary UART and the hardware serial port on RPi) on RPi’s GPIO header: To use this serial TTL port, the serial Linux console on RPi OS must first be disabled since it’s used by default. As both of the UART types are 3.3V compatible, it’s important to use the appropriate serial adaptor for proper serial communication over different interfaces (such as RS-232 or USB).

The serial adaptor must also have a 3.3/5V level shifter, so that it can convert the 3.3V TTL logic signals of RPi’s serial TTL port to 5V TTL logic signals (USB) — or other TTL voltage levels (RS-232), according to the interface (USB or RS-232) that the adaptor is designed for use with.
In the user-program (such as Python script), the hardware serial port can be accessed by referencing the respective Linux device. The /dev/serial0 will always point to the primary UART.

Some devices may not have the hardware USB interface, but a software-only USB stack instead. When such a device is connected to RPI’s USB port, it’s indicated in Linux devices as /dev/ttyUSB* (where * is the device number).

Available serial ports on RPi can be listed by running ls /dev/ command on the shell. If the listed device includes Linux devices, such as /dev/ttyAMC0, /dev/ttyAMC1 etc., these are CDC-class USB devices. If the list includes Linux devices, such as /dev/ttyUSB0, /dev/ttyUSB1, etc., these are USB devices connected via the software-only USB stack.

Serial UART communication using RPI’s Bluetooth & WLAN ports
By default, the secondary UART is connected to a combined WLAN/Bluetooth connecter of Raspberry Pi. To have serial communication over Bluetooth or WLAN using the UART protocol, the Linux device /dev/serial1 can be pointed. Alternatively, /dev/ttyS0 or /dev/ttyAMA0, or whichever is the secondary UART, can be pointed in the user-program (like in a Python script).

Next, the kernel use of the serial port must be disabled in /boot/cmdline.txt file by removing this flag:

Now, the secondary UART can be used for serial UART communication over RPI’s Ethernet port by using tools, such as Point-to-Point Protocol Daemon (pppd).

General-purpose computing devices can be directly connected to Raspberry Pi via USB-to-USB cables, using RPi’s USB ports. These devices include:

The computing devices can also be interfaced with RPi’s hardware serial port (on a GPIO header) by using a suitable USB-serial adaptor or USB-serial bridge board.

Therefore, a serial hardware port is most useful in embedded applications, and can also be used for interfacing with USB or RS-232 interface devices.