Even simple digital input/output operations involve sound technical know-how. To learn the technical aspects of digital input in microcontrollers and have some in-depth knowledge of LEDs, check out our article on digital input in Arduino.  To learn more about switches and technical aspects of digital output in microcontrollers, we recommend going through our article on digital output in Arduino. It is expected that you are familiar with What MicroPython is. And yes, before you try hands-on digital input/output in ESP8266/ESP32 using MicroPython, you must upload the MicroPython firmware in ESP8266/ESP32 and get ready with uPyCraft/Thonny IDE on your computer.

PIN class in machine library
The PIN class of the machine module is designed to control general-purpose input/output (microcontroller GPIO). This class is imported in a MicroPython script using the following statement.

The pin class contains methods to set the pin mode and get and set the logic levels of digital pins. Each port (supported microcontroller) has a different pin configuration and pin assignment. A physical pin of a port is defined by an identifier, i.e., a variable. The identifier is an instantiation of the Pin object. A specific physical pin of a port/microcontroller is specified by a number, string, or tuple id in the pin object instantiation. The id is specific to a given port/microcontroller. The pin instantiation is done by the Pin() method of the class. This method is defined as follows.
class machine.Pin(id, mode=- 1, pull=- 1, *, value=None, drive=0, alt=- 1)

The parameters of the Pin() method are described as follows.

id: The mandatory parameter identifies a specific physical pin on a given port/microcontroller. The id may be provided as a number, string, or tuple.

drive: It specifies the output power or output current carrying capability of the given pin. It can be set to Pin.DRIVE_0, Pin.DRIVE_1, Pin.DRIVE_2 or Pin.DRIVE_3, corresponding to ascending output power as mentioned in the table below.

For example, the following statement sets pin 2 of a given port to digital output.
p2 = Pin(2, Pin.OUT)

Similarly, the following statement sets pin 1  of a given port to a digital input with internal pull-up enabled.
p1 = Pin(1, Pin.IN, Pin.PULL_UP)

Unlike typical microcontroller programming, MicroPython allows you to change the mode and other parameters of a pin in the mid of the program. This is done by re-initializing the pin using Pin.init() method. This method is defined as follows.
Pin.init(mode=- 1, pull=- 1, *, value=None, drive=0, alt=- 1)

The Pin.init() method parameters are specified as the same as in Pin() method. The mode of a pin object can also be explicitly set by calling Pin.mode() method. If Pin.mode() is called without arguments, it returns the current mode of the given pin. Similarly, Pin.pull() method lets set or get the pin pull state, and Pin.drive() lets get or set the pin drive strength.

The digital logic at a given pin is obtained or set using the Pin.value() method. It is defined as follows.
Pin.value([x])

ESP8266 features and pin configuration
We will be running our MicroPython codes on ESP8266 and ESP32 boards. ESP8266 has 17 GPIO, one SPI and HSPI interface, one I2C, two UART, one I2S input and output interface with DMA, and a 10-bit ADC. The I2C is implemented in software that can be multiplexed over any GPIO. ESP8266 is available in a variety of breakout boards. How different pins and peripherals are exposed differs among different ESP8266 boards. The most popular ESP8266 boards are ESP8266-01 and ESP8266-12E. The pinout of ESP8266-01 is shown in the image below. 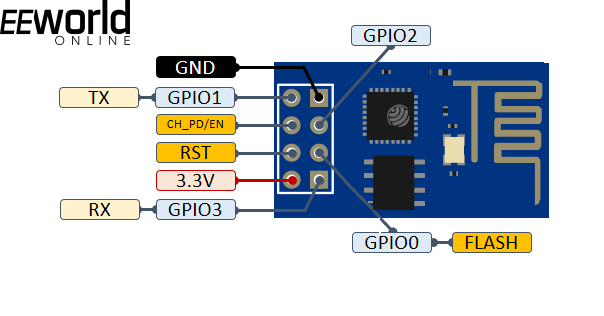 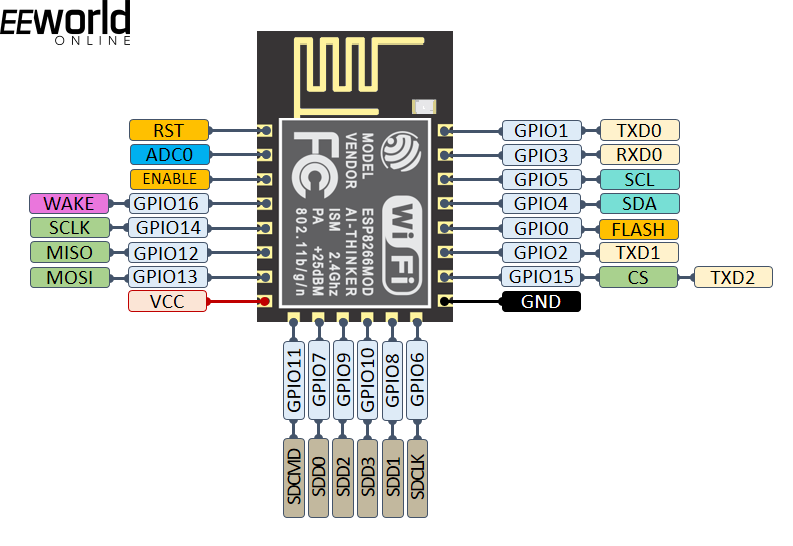 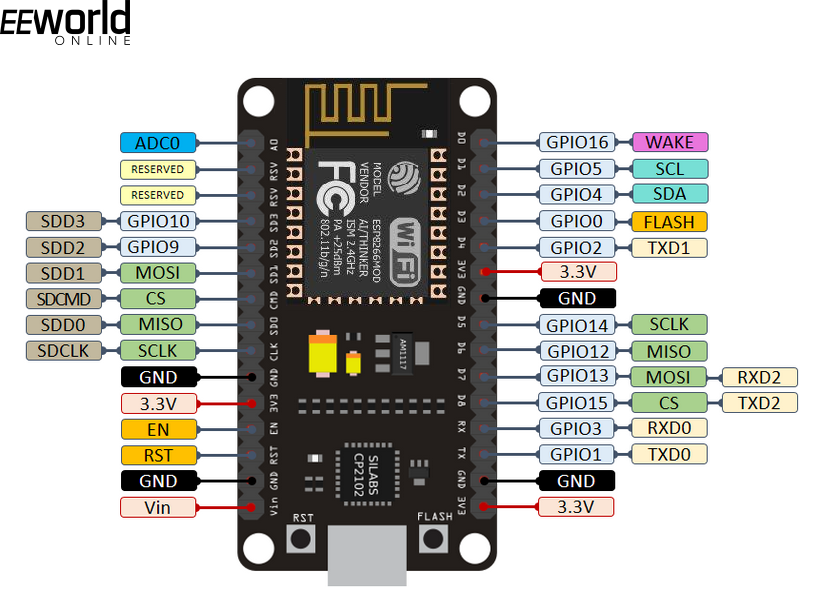 Digital input/output in ESP8266
ESP8266 GPIOs are 3V3 compatible and can sink or source a maximum of 40 mA. As we can see, GPIO6, GPIO7, GPIO8, and GPIO11 are not available for input/output in the ESP-12E breakout board, which is commonly available as a NodeMCU kit. The GPIO6 is exposed as ADC0 in the breakout board. The GPIO6~GPIO11 is connected to the Flash chip. That is why these are not recommended to use for digital input/output. We are then left with GPIO0~GPIO5 and GPIO12~GPIO16.

The GPIO0 is used for setting the ESP8266 in bootloader mode. That is why GPIO0 can be used only after burning the MicroPython firmware in ESP8266. Similarly, GPIO16 is used to wake up the ESP8266 from a deep sl; therefore, it must be avoided for digital input/output if the deep sleep mode is utilized in the embedded application.

While assembling an external circuit with ESP8266, the boot behavior of its GPIO pins needs to be considered. When ESP8266 boots up, the board uses GPIO0, GPIO1, GPIO2, GPIO3, GPIO9, GPIO10, GPIO15, and GPIO16. The GPIO1, GPIO3, GPIO9, GPIO10, and GPIO16 are pulled HIGH at the boot up while other GPIOs, except for GPIO4 and GPIO5, output a LOW signal. Therefore, if any relay is driven in the circuit attached to ESP8266, only GPIO4 and GPIO5 are suitable to connect the relays. All other GPIOs can result in autonomous relay operations due to the odd behavior of GPIOs with the relay driving circuit during the bootup. It should also be noted that the boot will fail if GPIO0, GPIO1, and GPIO2 are externally pulled low in the circuit. The boot will also fail if GPIO15 is externally pulled high in the circuit. Therefore, the following precautions must be taken while assembling an external circuit with ESP8266.

Finally, it must be remembered that the I2C interface in ESP8266 is available on GPIO4 (I2C SDA) and GPIO5 (I2C SCL) in the NodeMCU kit. The SPI interface is available at GPIO12 (MISO), GPIO13 (MOSI), GPIO14 (SCK) and GPIO15 (CS). The PWM is available in all GPIO, while the interrupts are available at all GPIOs except GPIO16.

The ESP32-DevKit V1 has the following pin diagram. 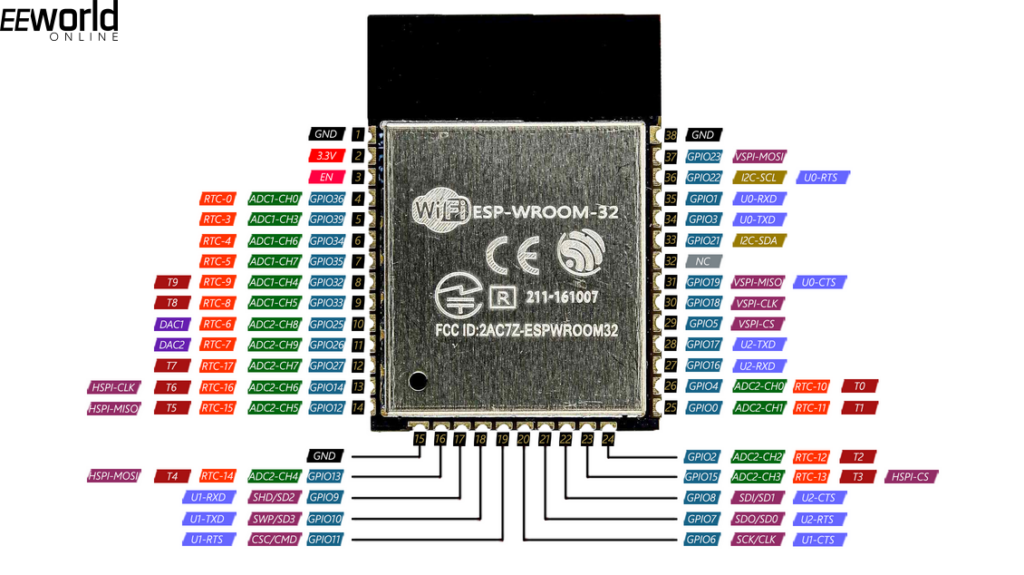 The ESP32-DevKit V1 has the following pin diagram.

Digital input/output in ESP32
ESP32 GPIOs are 3V3 compatible and can source or sink a maximum of 40 mA. However, the development board can also be powered by a 5V supply, as it has an onboard voltage regulator. There are 39 GPIOs in ESP32. These GPIO6~GPIO11 are connected to internal SPI flash; therefore, these should be best avoided. The GPIO28~GPIO31 are not exposed on the development board. The GPIO34, GPIO35, GPIO36, and GPIO39 are input only. Rest all GPIOs can be used for both digital input and output.

It should also be remembered that UART is available at the following pins.

There are two I2C channels in ESP32. The default I2C pins in ESP32 are GPIO21 and GPIO22. However, the software I2C can be implemented on any GPIO.

Note that the MicroPython firmware must be uploaded in the ESP8266. The Python code can be written and uploaded to ESP8266 using uPyCraft or Thonny IDE.

Working
The script begins with importing the Pin class of the machine module and the sleep class of the time module. The GPIO5 is set as digital output to drive LED. The GPIO4 is set as a digital input with a push button connected in a pulled low configuration. In the while loop, the output at the GPIO5 is set to the input at GPIO4. The GPIO4 is pulled low by default, so the LED remains off. Whenever the push button is pressed, the GPIO4 goes HIGH, a HIGH signal is passed at GPIO5 simultaneously, and the LED starts glowing.