Pulse Width Modulation (PWM) is one of the five basic functionalities in any microcontroller. The other four are digital input, digital output, analog input, and serial data communication. Most microcontrollers do not have a built-in digital-to-analog converter to output analog signals. However, most of the microcontrollers have one or more PWM output interfaces. PWM signals are periodic rectangular signals with programmable ON and OFF pulse duration. With a modulated pulse width, these signals can approximate true analog output. PWM signals are not meant for analog data communication, delivering electrical power, or working with analog circuits. However, these signals are very useful in providing output power to external components like LED lights and speakers. These signals can also be used as control signals for actuators like servo motors.

PWM signals are used to control devices instead of delivering power to them. The power output from a microcontroller GPIO is too small to drive any actuator or device practically. For example, the maximum current that ESP32 and ESP8266 boards can sink or source is only 40 mA, and the operating voltage is just 3.3V. External power amplifier circuits are required to drive components like speakers and buzzers with PWM signals.

What is Pulse Width Modulation?
Pulse Width Modulation changes the average power delivered from a signal by chopping the square wave signal into discrete parts. It is not an actual continuous signal. Instead, a periodic digital signal’s ON, and OFF duration is modulated to reduce the effective voltage/power output. For example, if a microcontroller’s GPIO outputs 3.3V in digital output while generating a PWM signal of 50% duty cycle from the pin, it will output an effective voltage of approximately 1.65V, i.e., 3.3/2.

Also, note that PWM signals are periodic signals. They cannot approximate non-periodic continuous signals; even being periodic signals, PWM signals can not precisely approximate all frequencies. How close a PWM signal can match an output frequency depends on the base frequency of the microcontroller and the PWM resolution. For example, the base frequency in ESP32 can range from 1 Hz to 40 MHz, and PWM resolution can be set from 1 to 16 bits. Let it be set to 10 bits. Suppose you want to output a frequency of 300 KHz. If the base frequency is set to 40 MHz, the divider required for generating 300 KHz frequency will be 40,000,000/300,000, i.e., 133.33. If we use 133 as the divider, the actual signal frequency we obtained is 40,000,000/133, i.e., 300,751 Hz. This is not precisely 300 KHz.

Also, note that PWM output largely depends upon the particular behavior of the specific microcontroller/port. For example, Arduino boards use a dedicated hardware clock to generate PWM signals. The ESP boards use timers and interrupts for PWM generation, starting with a theoretical base frequency of 80 MHz. The PWM controller in ESP32 consists of two sub-modules – LED Control (LEDC) and Motor Control Pulse Width Modulator (MCPWM).  In MicroPython, the Expressif’s IoT Development Framework (IDF) is used as the software development kit. The kit uses the same API for PWM implementation in ESP8266 and ESP32. In ESP32, the MicroPython firmware uses an LEDC peripheral for PWM generation. Arduino’s minimum and maximum frequencies depend only on the base clock frequency and the PWM resolution. But, in the case of ESP boards, it is dependent not only on hardware implementation like the base frequencies supported in Expressif’s IDF but also on software implementation in the MicroPython firmware. We will discuss this in detail later in this article.

MicroPython PWM class
The PWM class is written to provide pulse width modulation in MicroPython supported boards. This class can be imported into a MicroPython script using the following statements.
from machine import PWM

After importing, an object has to be instantiated from the PWM class. For this, machine.PWM() method is provided. This method has the following syntax.
class machine.PWM(dest, *, freq, duty_u16, duty_ns)

This construct returns a PWM object. The dest parameter is the PWM pin on which PWM output must be generated. This may be specified by a port-specific identifier that can be an integer, string, or a tuple depending upon the specific port. The freq, duty_u16, and duty_ns are optional parameters. The freq parameter is the frequency in Hz for the PWM cycle. The duty_u16 parameter specifies the duty cycle as ratio duty_cycle/65535. The duty_ns parameter specifies the pulse duration in nanoseconds. If the frequency is specified, either only duty_u16 or only duty_ns must be provided. Some of the valid examples of instantiating PWM objects are the following.
pwm0 = machine.PWM(Pin(0))
pwm0 =  PWM(Pin(0))
pwm0 = PWM(Pin(0), 5000)
pwm0 = PWM(Pin(0), 5000, 2**16*1//2)       //50% duty cycle
pwm0 = PWM(Pin(0), 5000, 250_000)

The class includes the following methods for configuring PWM output.

PWM.init(*, freq, duty_u16, duty_ns): It modifies the configuration settings of the PWM object after the object is already constructed. It accepts the same parameters as the constructor object except for the PWM pin.

PWM in ESP8266
ESP8266 has four dedicated PWM output interfaces. These PWM interfaces are listed below.

MicroPython lets you specify a frequency range of 1 Hz to 1 KHz and a PWM resolution of 10 bits for ESP8266. In MicroPython, up to 8 PWM outputs can be run on ESP8266. Take a look at the following screenshot from esppwm.c in MicroPython firmware. In ESP8266, it is also possible to implement PWM by software. This involves the use of timer interruptions. The software PWM in ESP8266 can have a resolution as low as 44 nanoseconds. The PWM frequency range can be adjusted from 1 microsecond to 10000 microseconds, i.e., 100 Hz to 1KHz. The software PWM in ESP8266 allows a duty cycle resolution of 14 bits at a 1 KHz frequency. In ESP8266, PWM can be output on all GPIO except GPIO16. 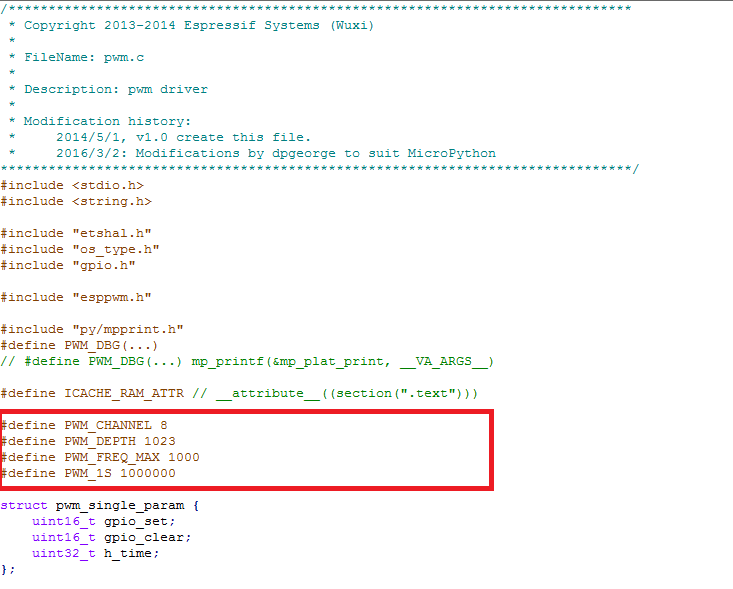 For ESP8266, the PWM object can be instantiated using the machine.PWM() constructor. Note that the parameters duty_u16 or duty_ns are not acceptable for the ESP8266 port. The PWM frequency can be set or gotten using PWM.freq() method. The acceptable value for setting frequency is between 1 and 1000. The PWM duty cycle can be set or gotten using PWM.duty() method. The method accepts a 10-bit value as a parameter and sets the frequency as ratio duty_cycle/1023. Note that you cannot use duty_u16() or duty_ns() for setting or getting the duty cycle for ESP8266 as the board allows only 10-bit PWM resolution. A PWM object can be disabled by calling PWM.deinit() method.

PWM in ESP32
The PWM controller in ESP32 consists of two different sub-modules – LED Control (LEDC) and Motor Control Pulse Width Modulator (MCPWM). The MicroPython firmware uses only the LEDC module for PWM generation. This is evident from the following screenshot from ports/esp32/machine_pwm.c in MicroPython firmware.

The LEDC module of ESP32’s PWM controller can use one of three different source clocks listed below.

For ESP32, the PWM object can be instantiated using the machine.PWM() constructor. The duty cycle can be set using PWM.duty(), PWM.duty_u16() or PWM.duty_ns()  methods. The PWM frequency can be set using PWM.freq() method. The PWM settings can be changed by calling PWM.init() method. The changes in PWM settings happen without CPU interruptions. The PWM object can be disabled by calling PWM.deinit() method.

Fading LED on ESP8266 using MicroPython firmware
Fading LED lights is one of the typical applications of PWM signals. LED fading is often used to monitor the PWM output of a microcontroller. In this article, we will use MicroPython to fade LED on ESP8266.

Circuit connections
Connect the anode of LED with GPIO14 of ESP8266 and its cathode to ground via a series resistor of 330 ohm. In this manner, the LED is connected with ESP32/ESP8266 such that it glows when the GPIO source current to the LED while it remains off until GPIO is at LOW logic. 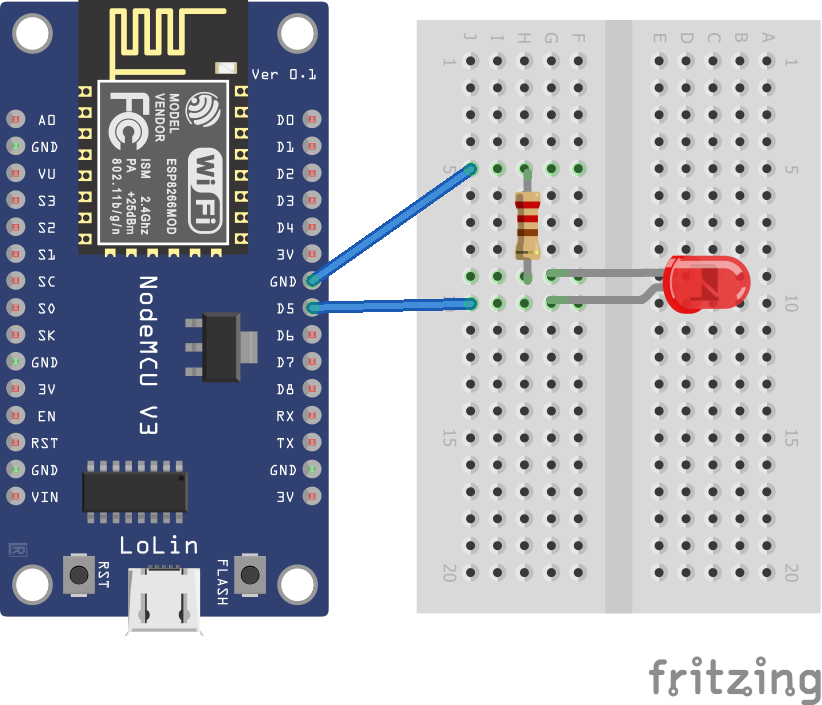 How it works
The LED is connected to ESP8266 such that it glows when the board source current to it. The ESP8266 delivers a PWM output to the LED. The PWM frequency is set to 1 KHz, which is the highest frequency available for ESP8266. The duty cycle can be adjusted at a resolution of 10 bits. So, the duty cycle is increased from 0 to 1023 at five-millisecond intervals. This gives a fading out and fading in effect over five seconds.

The code
The code begins with importing Pin and PWM classes from the machine and sleep classes from the time modules. The frequency is stored in a variable of 1000. A PWM object is instantiated by calling PWM() method. In an infinite while loop, the duty cycle is changed from 0 to 1023 and applied by calling PWM.duty() method for 5-millisecond intervals.