Sensors use slave-master protocols for interfacing with microcontrollers and microcomputers. Among many different slave-master protocols, I2C and SPI protocols are the common serial communication protocols widely found in embedded devices. Both protocols let the microcontroller/microcomputer take the master role and allow interfacing of several sensors and embedded blocks on a common bus. This tutorial will discuss the implementation of the I2C protocol in MicroPython and explore how sensors are interfaced with ESP8266 and ESP32 using the I2C bus. Learn more about the I2C protocol before continuing this tutorial.

The hardware I2C is implemented in the I2C class of the machine module. The I2C class is imported in a MicroPython script using the following statement.
from machine import I2C

The constructor function can take four arguments – id, scl, sda, and freq. The id is the identifier of the particular I2C peripheral. If a port has multiple I2C peripherals, it is important to pass the I2C ID. The id can be an integer, string, or tuple. This depends on the particular port. The scl and sda are the pins used for the I2C clock and I2C data, respectively. If the SCL and SDA pins are changeable in a port, these arguments can be passed to assign pins to available I2C peripherals. If scl and sda are not passed as arguments, default pins are assigned for I2C SCL and SDA respectively. The SDA and SCL pins may be fixed in many ports and cannot be changed. The freq sets the maximum frequency for the I2C clock. Following are some valid examples of the I2C constructor.

The I2C class includes the following methods for configuring and managing data communication.

I2C.init(): This method is used to initialize the I2C bus. It applies to an I2C object, which is already instantiated with an I2c id. The init() method can take sda, scl, and freq as arguments.

I2C.deinit(): This method turns off the I2C bus. It is only available in the WiPy port.

I2C.scan(): This method scans all I2C addresses between 0x08 and 0x77 and returns a list of addresses that respond. This method is useful in listing connected I2C devices. The devices are recognized by their I2C addresses.

I2C.readfrom(addr, nbytes, stop=True): This method reads nbytes from I2C address addr. A stop condition is generated after the read operation is complete if the stop is true. A call to this method returns a byte-type object, which must be stored in a variable.

I2C.readfrom_into(addr, buf, stop=True): This method reads into the I2C buffer from the I2C address addr. The method returns nothing, but all the bytes available on the I2C bus for reading are saved. The stop condition is created after reading into the buffer if the stop is true.

I2C.writeto(addr, buf, stop=True): This method writes bytes from the buffer to the I2c address addr. It returns the number of acknowledgments received. If no acknowledgment is received after sending a byte, the remaining bytes are not sent. If stop is true, the stop condition is generated after sending the bytes.

I2C.writevto(addr, vector, stop=True): This method sends bytes stored in a vector to the I2C address addr. A vector is a list or tuple of objects with a buffer protocol. Using this method, several objects can be sent to the given I2c address with a single call. The method returns the number of acknowledgments received. The method sends the address once, and then the byte objects are sent sequentially. The remaining bytes and objects are not sent if the acknowledgment is not received after sending a byte. If stop is true, the stop condition is generated after sending the vector.

I2C.readfrom_mem(addr, memaddr, nbytes, *, addrsize=8): This method is used to read bytes from the I2C address addr starting from the memory address memaddr. The addrsize specifies the size of the memory address in bits. The number of bytes read are equal to nbytes. The method returns a byte object.

I2C.writeto_mem(addr, memaddr, buf, *, addrsize=8): This method is used to write a buffer buf to the I2C address addr starting from the memory address memaddr. The method returns nothing. The addrsize specifies the size of the memory address in bits.

All the methods available in the I2C class, the same are also available in the SoftI2C class as it is. The software I2C is implemented using bit banging. It can be generated on any GPIO that is output capable. It is important to note that software I2C is not that efficient compared to hardware I2C. It is possible to communicate with several I2C devices on the same I2C bus, provided each device connected to the bus has a different I2C address. Therefore, even if only one hardware I2C peripheral is available in a port, it must be utilized for I2C communication. The software I2C must be only a last resort.

I2C in ESP8266
There is a single I2C driver in ESP8266. This driver is implemented in software and is available on all GPIO. Since the software implementation of ESP8266 I2C is internal, the I2C class (written for hardware I2C) of MicroPython is used for managing I2C communication in ESP8266. The default I2C pins in ESP8266 are GPIO4 (SDA) and GPIO5 (SCL). 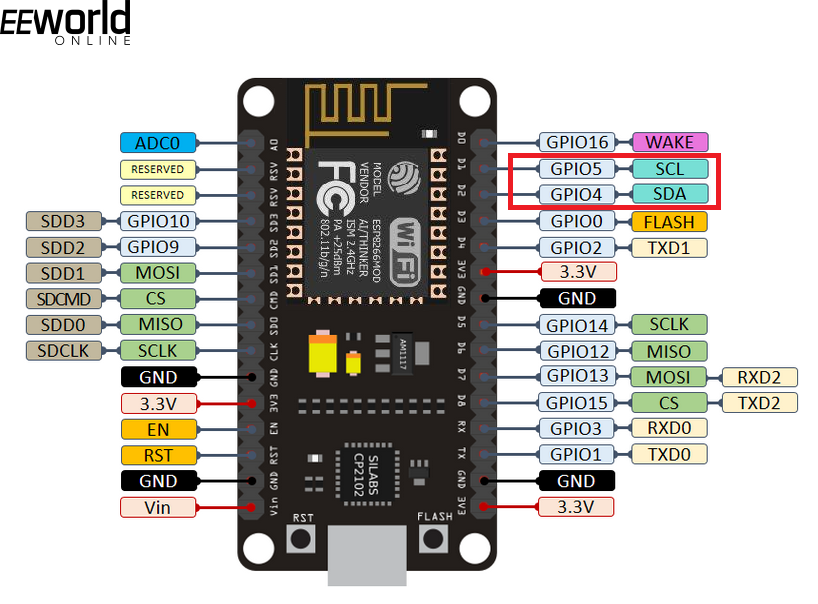 Interfacing ADXL345 with ESP8266 using I2C bus
Now that you are acquainted with implementing the I2C protocol in MicroPython let us get our hands dirty. Sensors commonly use the I2C and SPI protocols for interfacing with embedded controllers and microcomputers. Let us interface an ADXL345 accelerometer sensor with ESP8266 using MicroPython implementation of the I2C protocol. 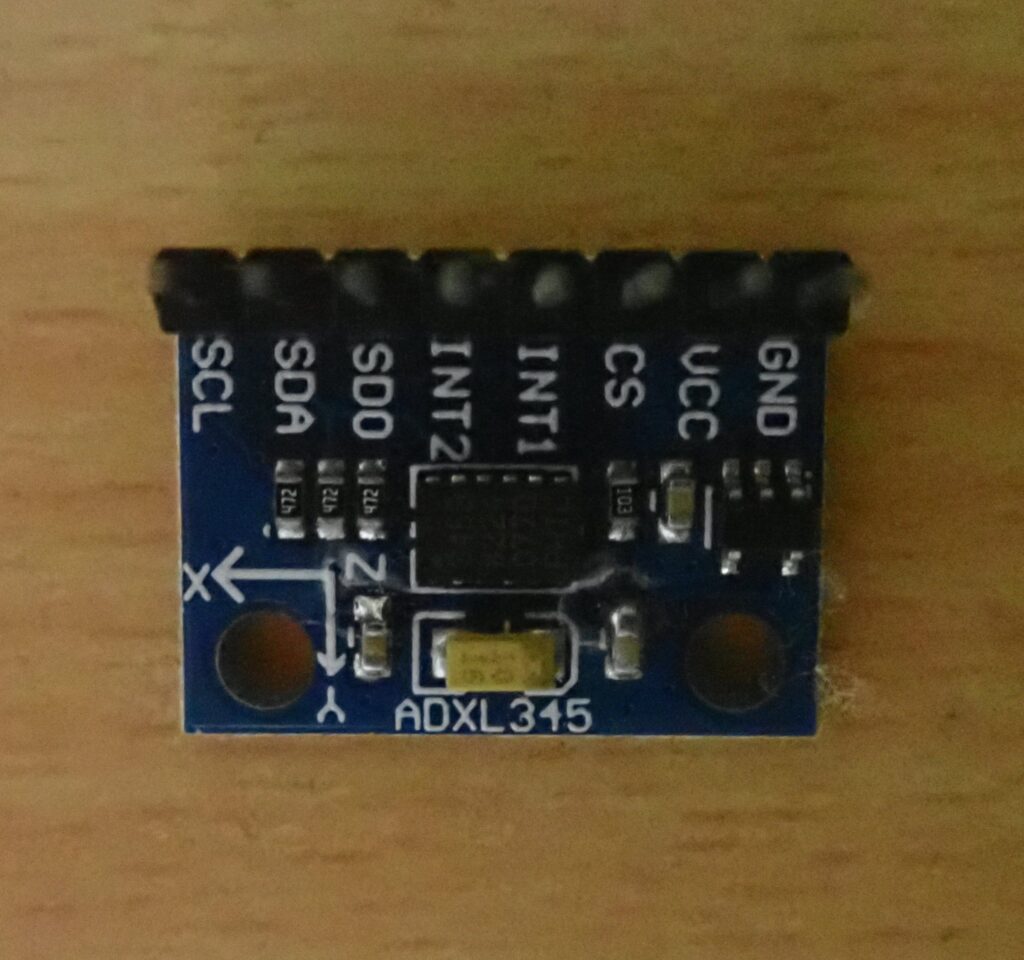 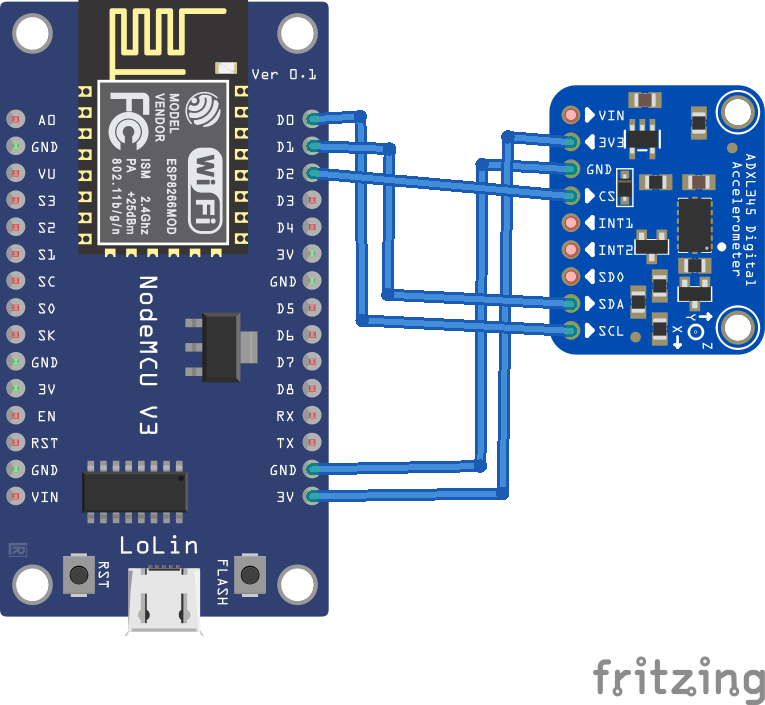 Note that you must have uploaded MicroPython firmware to ESP8266 and get uPyCraft IDE ready before continuing this project.

About ADXL345 accelerometer
ADXL345 is a 3-axis MEMS accelerometer sensor. It is a digital inertial sensor and uses a capacitive accelerometer design. It has a user-selectable range of up to +/-16g, a maximum output resolution of 13 bits, a sensitivity of 3.9 mg/LSB, and a maximum output data rate of 3200 Hz. The sensor has both I2C and SPI interfaces to communicate with controllers/computers. ADXL345 measures static acceleration due to gravity as well as dynamic acceleration resulting from motion or shock. It can be used to sense linear acceleration in 3 axes and detect an object’s tilt and free fall. It can detect the presence or lack of relative motion by comparing acceleration values to user-defined thresholds.

ADXL345 has built-in registers that can be read and written to configure the sensor’s settings and read acceleration values. ADXL345 offers four measurement ranges: +/-2g, +/-4g, +/-8g, and +/-16g. The default measurement range is +/-2g, which can sense acceleration up to 19.6 m/s2 in either direction along each axis. The maximum resolutions are 10-bit for +/-2g, 11-bit for +/-4g, 12-bit for +/-8g, and 13-bit for the +/-16g range. The default resolution is 10-bit, which for +/-2g (default) range allows a sensitivity of 3.9mg/LSB. The default data rate is 100 Hz. All these configurations can be changed or set by writing data to built-in registers of ADXL345. A controller/computer can read acceleration by reading values from registers 0x32 to 0x37.

The internal registers of ADXL345 need to be read and written for setting configurations (like setting measurement range, data transfer rate, sensitivity, and resolution) and reading acceleration values. A table of these registers is given below.

This is followed by the definition of constants representing the configuration registers of ADXL345. The SCL, SDA, and CS pins for the I2C bus are defined, and the CS pin is set as a digital output. An I2C object is instantiated, setting the D0 (GPIO16) and D1 (GPIO5) as SCL and SDA, respectively, and setting the maximum I2C frequency to 10000 Hz. The I2C bus is scanned by calling i2c.scan() method, and the returned list is stored in a list ‘slv’. With the help of a for loop, the values in list ‘slv’ are compared with the known I2c address of ADXL345. A message showing “ADXL345 is found” is printed on the console if the address is found. The matched address is stored in a variable ‘slvAddr’.

In an infinite while loop, the values of registers 0x32 and 0x33 are read by calling the user-defined readByte() function. The values are formatted to a single 16-bit number using ustruct.unpack() method. This gives the raw acceleration value along the x-axis. The raw value is multiplied by 3.9 to obtain acceleration in mg.